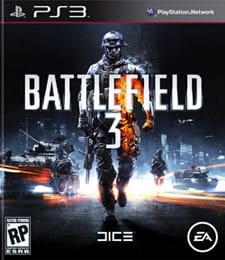 This year is definitely the year of the modern shooter with this, the latest in the Battlefield series the first to take aim and fire at your console of choice. But will it be victorious?

An almighty war is raging in the games space. On one side is EA with Battlefield 3 (BF3) and on the other is Activision with Call of Duty Modern Warfare 3.

In the run up to its release we were fortunate enough to see quite a lot of BF3 and what we saw looked very good and we were excited about finally getting our hands on it. The trouble is this is where the disappointment started. 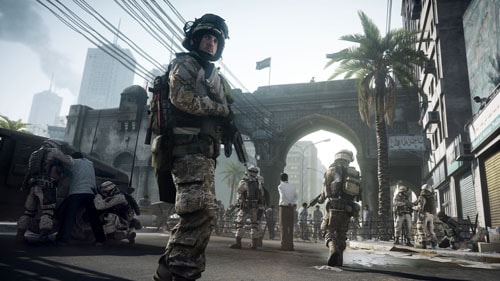 Having watched a live PC demo of the first level, and various other bits, by the time we got to do it for real, it had lost its sheen. It was not helped by the fact that it did seem to look better on the PC than the PS3 version that we tested. The PC version just looked sharper, grittier and more realistic.

Having said this Battlefield 3 is a long, long way from being a bad game. It is a very, very good game. Even though we are a little critical about how the PS3 version stacks up to the PC version we saw, it still looks amazing.

The level of detail developers DICE have gone to is quite staggering, that and the way that the characters move. All together it is a very lifelike game. We did have one unfortunate incident though where one member of our team ran straight through another member without flinching.

Where Battlefield 3 is at its best is when you are a grunt on your feet, running around like a man possessed from firefight to firefight. However, in a similar way to Battlefield Bad Company 2 you spend as much time in vehicles as you do on foot and these, in our opinion, aren’t as good as the ‘on-foot’ bits.

You spend time as a fast jet pilot, a zoomy, as the machine gunner on an M1 Abrams tank and also as a main gunner. These are the usual sort of fare where you have to destroy stuff below you or coming towards you, as well as RPG-totting baddies or cars loaded with explosives. The trouble is we didn’t find much of this that interesting. The big tank battle that you do was such an anti-climax it was a disappointment.

Whereas in BFBC2 the various vehicle-based sections linked directly with the on-foot bits, we felt that although this is sort of the case in BF3 it’s not done quite as well. Also the vehicle sections are entire levels and aren’t really that interesting as they are really like when you grab on to a fixed gun and have to fend off a set amount of baddies.

As with Call of Duty MW3 though the single player story is just one part of the game. The multiplayer is where a lot of the action is. This, as you would expect from DICE, is a very polished affair with everything we have come to expect from a modern multiplayer shooter.

It is less arcadey than MW3, or to use alternative parlance – harder. Reasons we cite for this are: it’s harder to tell who is on your side and who isn’t and also you seem to have to wait longer between upgrades. 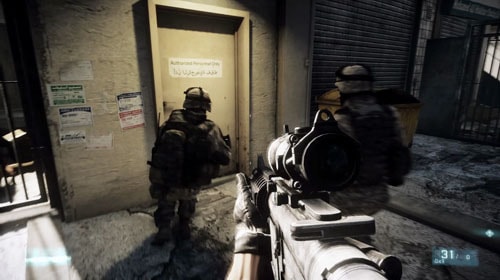 Just because something is harder or different doesn’t mean that it isn’t as good or simply not good at all of course. Having played MW2 online a lot, BF3 is, of course very different and it took time to see how good it was and not just criticise it for not being the same as MW.

A lot of the principles are the same, you get points for kills and for assists. Weapon unlocks don’t seem to happen as quickly, probably because you don’t level up as quickly as you do in the MW games.

The maps though are excellent and the games are always great fun. When you start out you will die a lot, don’t let this put you off though. Perseverance is the key with BF3 that’s for sure.

As good as the multiplayer is, and the single player is in parts, we still have to say we are a little disappointed with BF3. This is probably because we had such high hopes for it. It is a good game, but not quite as epic as we had hoped.