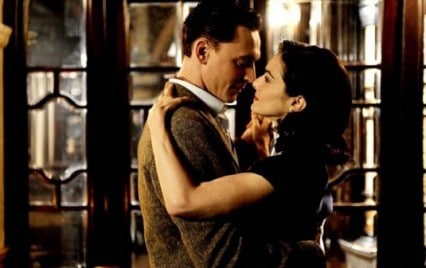 Anyone fortunate enough to have heard Terence Davies’ interview on the Kermode and Mayo show last Friday will no doubt have been enchanted by the gloriously dulcet tones of the director’s voice, and simultaneously charmed by the evident passion, artistry and emotion he clearly brought to his adaptation of Rattigan’s play “The Deep Blue Sea.” In the same interview, a concluding diatribe against British Heritage cinema, whilst not without forceful conviction and to my mind no small amount of verity, sits rather curiously with what is, fundamentally, a disappointingly heritage film.

Rattigan and Davies do not at first glance represent the most compatible of figures, being that the latter in particular has proved himself to be so radical, progressive and emotionally open. Rattigan is currently, as a consequence of the centenary of his birth, undergoing a spirited revival in the London theatre which has prompted much acclaim and a widespread re-evaluation of his work, the playwright having fallen spectacularly out of fashion when the post-war theatre of angry young men, proletariat narratives and kitchen sink naturalism exploded into popular culture. It is a reappraisal which I think values a quintessential but dated sense of repression and Englishness which, while fascinating and an actor’s dream when well-executed, is actually very superficial, and in all honesty every bit as stultifying as the Heritage films that Davies professed such a loathing for.

It is perhaps no surprise, then, that Davies’ film is at its best when he discards the theatricality and traditionalism of the play in favour of more distinctly cinematic modes of expression, and at its worse when he refuses to abandon his faithfulness to Rattigan’s original. There are bravura moments of impressionism in the film which both hearken back to similar earlier masterful sequences Davies has directed, and convey through filmic techniques the essence of the play’s drama. The opening fifteen minutes, without dialogue and played out in slow fades to crucial narrative events to a soaring musical score, is as deft and exquisite a balance of images and sound as Davies has ever struck, and a superior evocation of the transience and impressionistic heightening of powerful, formative memories than was achieved by his namesake in “The Tree Of Life.” The notion of dreamlike reconstruction of memory remains a key touchstone throughout the film, with Davies’ expulsion of both a linear narrative and a framing device to control the story’s various flashbacks meaning we weave through the tumultuous emotion of the narrative as if wading through an ocean. We are conscious of the very subjectivity of the film’s structure, a rhapsodic fever dream experienced by Rachel Weisz’s Hester, and witness first-hand how her intoxication is slowly corroding her mannered and measured ingestion of reality. Community choral scenes in public houses, like in Davies’ autobiographical films, generate a strongly melancholic sense of mood and the past, informing Hester’s fragile psychological state even as it reinforces the film’s fifties period setting. Rattigan’s bookending gas-fire trope is retained, but this is itself bookended by Davies’ weightless and sublime tracking shot from the London street into Hester’s Ladbroke Grove bedsit, and at the film’s conclusion back out of it, turning the camera finally to children playing in the crumbling ruins of a house never rebuilt after its blitz destruction. Davies tracks into and out of Hester’s perspective, and her mind, in a metaphorical sense as he tracks in and out of her physical abode, with the shot of the charred bombsite a stark contrast to the lush, delirious beauty of the imagery as seen subjectively, impressionistically, through the eyes of a mentally fragile and blindly love-struck woman once used to the lap of luxury. We’ve seen an idealised, romanticised view on fifties Britain, but Davies ultimately doesn’t neglect the reality. All this style and substance merges most profoundly just as Hester nearly throws herself beneath an underground train, which instead flashes by her in a shot lifted, wonderfully and evocatively, from Lean’s “Brief Encounter.” What stays her suicidal leap is a self-contained flashback to the war, when she and her now ex-husband huddled with many others in a dank and dark subway station, singing Molly Malone for true spiritual union, as a tracking shot reveals their collective stiff-upper lip in the face of the terror of the blitz.

It’s mesmerising stuff, but it all falls apart when Davies abandons these inventive, melodramatic techniques and falls back on Rattigan’s play, which consists of long talky scenes in Hester’s bedsit which recall Eddie Izzard’s take on what British cinema sounds like. The problem here is not in Davies’ direction, which is as beautifully composed and orchestrated as in scenes where he has meandered away from the play, nor is it the actors’ fault. Tom Hiddleston makes for a roguish and handsome but quite odiously selfish man, clearly trying to recapture the former excitement of his life as fighter pilot with little thought for how it might damage others, and contributes to the ambiguity of why Hester is so ridiculously in love with such a loathsome person, and this helpfully distances us from complete identification with her. Simon Russell Beale, by way of contrast, is wonderfully endearing and tender as Lord Collyer, and never seems to be the dull and oppressively dispassionate lover Hester believed him to be. Rachel Weisz gives by far her best performance here, so facially expressive that a single look can say a thousand words, and a perfectly timed gesture or behavioral mannerism can betray her character’s inmost sequences: more on this in a minute. Fundamentally, the problem is with Rattigan himself. Whilst long dialogue sequences can be mesmerising in film, the ones in “The Deep Blue Sea” are not because the actors are forced to adhere to a sense of subtlety when the language and words they are giving voice to, revelatory in how it deals with passionate love, unrequited romance and barren marital relations at the time of its writing, is in the twenty first century tedious and obvious. Rattigan’s language is all style and no substance, the impression of repression beneath which there is genuinely nothing more to see, yet on stage this language would satisfy by way of being aurally beautiful, and the actors would appear to be more magnetic than their admittedly adequate and occasionally fine performances are on film.

At heart, the language of a play is verbal and spoken, whilst the language of cinema is visual. It is referential and associative through images rather than through sounds. Take as an example the way Davies and his cinematographer Florian Hoffmeister have shot the film. With exceptionally shallow soft lighting, a sombre colour palette, elegant camera movement and painstakingly composed static shots, combined with a paradoxically rich eye for shabby and decidedly unromantic period details, the piece achieves the same subjective romanticisation of Hester’s world and socio-moral situation through visual means as some would argue the play does with verbose language. Davies half-hearted dispatch of Rattigan’s language means that what does remain is intended to be profound and meaningful, yet it doesn’t inspire us to receive it as anything other than surface delicacy. On the other hand, the visual language of Davies film also refers back to the lush pictorial looks and heightened emotions of Sirkian melodrama, and the basic premise of the story itself is not too far removed from “All That Heaven Allows.” In this sense, the unique and distinctive language of film invites comparison and contrast with what has gone before, with Davies bringing deglamourisation and fragmented subjective reality to a melodramatic narrative, rendering it more impressionistic yet less dramatically satisfying.

The existence of this language of film, and that its basis is to be found within imagery, has been obvious since the origins of the medium, which for the first thirty years of its life, over a quarter of its present span, was silent. Yet that isn’t to say that language can’t be employed in cinema to devastating ends. Sidney Lumet’s “12 Angry Men” should stand out as the stagiest ever filming of a play, powered as it is by language and performance on a single set, yet the claustrophobia, framing and shot selection the director employs gives the piece an undeniable cinematic feel. Tarantino remains the modern master of dialogue in film, occupying much the same position as Joseph Mankiewicz and the Wilder/Diamond partnership have held in the past, yet dialogue in Tarantino’s films supplements rather than drives the work, and is so profligate with pop culture references and post-modern irony that the author is effectively using dialogue to deconstruct the role of dialogue in the form. Naturalistic dialogue, even that which is heightened to hyperbolic excess as in Tarantino’s films, naturally suits a realistic medium in the same way that poetic and heavily subtextual dialogue suits the more artificial and intellectually aware theatrical space, yet there is nevertheless room for it in film when used to a clear and effective end. Think only of David Lean’s adaptation of “Great Expectations,” in which the tone, rhythm and comical whimsy of Dickens’ dialogue is preserved in translation, and makes for a film that is as charming and delightful as it is literate, staggering and heartbreaking, knowing as Lean did that Dickens’ language is its own peculiar brand of archaic, one which when spoken oozes a delicate and warming charm.

Terence Davies is one of the great geniuses still alive and working in cinema today. “Distant Voices, Still Lives” is a film which haunts my memory, occupying the past as it does in a melancholic, effortless, breathless way which is overwhelmingly moving. I had hoped that the past, with all its emotions and nuances, would be recreated as powerfully and as insightfully in the director’s latest. Sadly it doesn’t: it isn’t speaking the same language.