Wow, September has barely started and I’ve watched all of my Cracking the Collection films for the month! I got ahead of myself with screeners and I’m expecting a tonne at the end of the month, so I got organised and sped through these in a week. 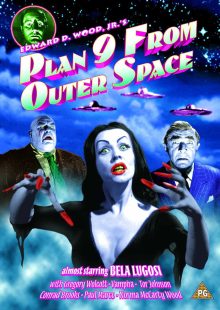 With all the Weekends of Trash I’ve enjoyed and my taste for cheesy B-movies, you’d have thought I’d have watched what is probably the most famous ‘bad’ movie. However, before now I’d never seen Ed Wood’s ‘masterpiece’, Plan 9 From Outer Space (a.k.a. Grave Robbers from Outer Space) other than the lovingly recreated sections in Tim Burton’s biopic, Ed Wood. Did it live up to its reputation? Yes I think it did. It’s pretty terrible, but as I’d hoped it’s one of the special class of ‘so bad it’s good’ films. From the hilariously overblown voiceover narration, to the cardboard sets, to the performances that are all either painfully wooden or hammtastic, it’s hugely entertaining to see just how bad it is. However, it’s also so cheap and shoddily written that there isn’t much action or drama to hold your interest, so the initial hilarity of how bad everything was did wear off after a while and I was struggling to stay awake as it stumbled through its ludicrously underwhelming finale. This is all part of what makes it fondly remembered by many as the worst film ever made though, so I was more than happy to have finally seen it and will likely give it another watch at some point. 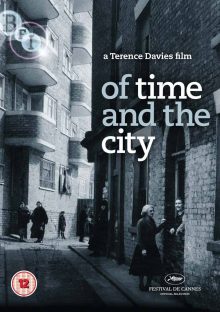 Of Time and the City

I’d only seen two of Terence Davies’ films prior to this and had drastically different reactions to both. I liked Distant Voices, Still Lives quite a lot, but absolutely hated The Deep Blue Sea. So I was a little worried about how I might take Of Time and the City, Davies’ documentary ode to his hometown of Liverpool and his experiences growing up there. In the end it placed somewhere in the middle. Made up of archive film of Liverpool throughout the last 60-odd years and a little new footage, using his own narration as a guide, it’s a cine-poem (or whatever you want to call it). It’s a film where my opinion of it kept varying wildly whilst I watched, as I felt some segments worked beautifully and others didn’t. I’m not a fan of people spouting poetry on film and there’s a lot of it here, so my main problem was that much of the film simply wasn’t to my tastes. Some of these readings were particularly off-putting for me through Davies’ delivery too. He often overemphasises key words and phrases in a rather hammy or camp fashion and I found the whole idea of him narrating this poetic view of his own life rather narcissistic. However, as a look at the history of Liverpool through the latter half of the 20th Century it’s excellent and some of the archive material is fascinating to watch. It’s all been curated and edited beautifully too, with Davies’ ear for music as evident as ever, even though I don’t share his hatred of The Beatles. 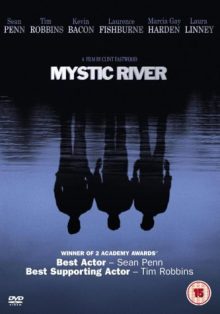 Good old dependable Clint Eastwood rounded off my month’s selections and he didn’t disappoint. Choosing to stay strictly behind the camera, Clint lets a fine cast (Sean Penn, Tim Robbins, Kevin Bacon, Laurence Fishburne, Marcia Gay Harden, Laura Linney etc.) flex their acting chops in a grim, but compelling dramatic thriller. With a gripping story and some incredibly rich, damaged characters, it’s a fine piece of classic filmmaking. There’s some powerfully emotive and thought-provoking material here and the sensitive subject matter (child abuse, murder, loss) is handled with care for the most part. However, I did feel the ending was a bit of a misfire. I didn’t have a problem with the way the main threads are tied up, although there are a few dramatic conveniences and it’s perhaps too neatly done. But there’s a coda to the film where Laura Linney’s character makes a dramatic shift in personality that seems totally out of place and I didn’t know how to take what came after this either. It’s a stumble in an otherwise masterful thriller.

Up next in October: