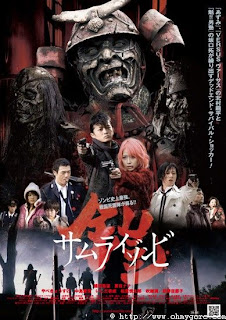 You get the idea from the title, Yoroi: Samurai Zombie is a silly action horror film with surprise, surprise, a bunch of samurai zombies in it! Unfortunately, although I never expected it to be a work of art, Yoroi does disappoint as an exploitation flick.

Written by Versus writer/director Ryuhei Kitamura and directed by Versus star Tak Sakaguchi, Yoroi borrows heavily from their cult classic debut. It’s got the same low-budget, all shot in the woods feel to it as well as the over-the-top action and gore quota. It doesn’t have the kinetic style of Versus though, or the pace, which means it never excites as much as it should. Also, crazily gory low budget action films from Japan these days have the likes of Machine Girl to contend with, and this never reaches the giddy heights of the king (or queen) of splatter.

At the end of all the daftness, the film has a surprisingly dark ending, which I wasn’t expecting. It doesn’t quite settle though after watching an hour or so of severed heads and pressure-washer arteries. The bloodiest sequences are where the film works best. The effects are never realistic, and some of the bloodletting looks copied and pasted throughout the film, but most of the humour comes from these crazy moments. If gore doesn’t interest you, you’ll be lost though, as there isn’t much else to enjoy here. The comedy quite often struggles to hit it’s mark. A seemingly indestructible gangster character provides some bad taste chuckles, but most of the time you’ll be smirking rather than laughing out loud.

There is fun to be had though. It’s obviously a very silly film, and if the style is to your liking you’ll still leave the cinema with a smile on your face. Unfortunately, you’ll also have a feeling of ‘been there, done that better before’.