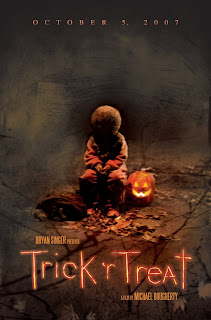 Trick ‘R Treat takes the traditional horror anthology format and gives it an Altman style interwoven story treatment. This is no wordy, improvisational drama though, Trick ‘R Treat is purely made for fun and thrills, which it delivers admirably.

It contains 4 plot-lines concerning various Halloween ‘rules’, one shows what happens when a couple blow out their jack-o-lanterns out before midnight, another uncovers a school principle’s secret life as a serial killer, a twenty-something virgin hopes to find love, and a group of teenagers play pranks around a supposedly haunted quarry.

As I mentioned before this isn’t a film that needs to be taken seriously. It reminded me of the Hollywood horror films of the 80’s and early 90’s, films that aren’t all that scary but have enough jolts and gore mixed in with a healthy dose of humour to create an enjoyable Halloween cinema experience. The structure works very well too, and the stories actually flow together quite seamlessly, keeping the pace up and never letting the film sag.

All in all it’s perfect late night fodder and it’s out on DVD now I think, so well worth tracking down. It’s a shame it didn’t get a cinema release though, as it’s a thoroughly enjoyable film.