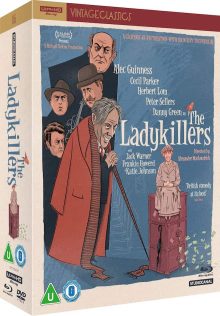 Although operating as a film studio from back in the silent era and being used for the BBC for many years before turning back into a film studio in 2000, West London’s Ealing Studios are most fondly remembered for a number of comedies made there during the decade following WWII. These were largely light in tone but with a satirical or dark edge that helped them stand out. They were always very English, often simultaneously celebrating and lampooning stereotypical traits of the country. These films included Whisky Galore! (1949), Passport to Pimlico (1949), Kind Hearts and Coronets (1949), The Lavender Hill Mob (1951), The Man in the White Suit (1951), The Titfield Thunderbolt (1953) and The Ladykillers (1955).

The Ladykillers proved to be the last of the great Ealing comedies, and one of the last films made by the studio under Michael Balcon, the man who ran the studio during its glory years, before the BBC bought it from him. Balcon produced some films under the Ealing banner at the MGM British Studios at Borehamwood for a couple of years following this, but only the rather more serious Dunkirk was notable.

The Ladykillers was a fine film to close out on though. It’s among the most fondly remembered titles from the studio and one I’ve loved for many years (though I have a slight preference to Kind Hearts and Coronets). Reflecting the film’s popularity among the British public, Studiocanal are releasing an exhaustive 5-disc 4K UHD Collector’s Edition of The Ladykillers. I’ve seen the film many times, but couldn’t resist checking out this new release. My thoughts follow. 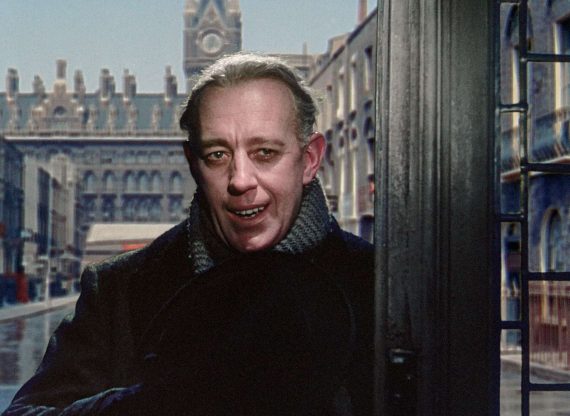 The Ladykillers opens by introducing us to Mrs. Wilberforce (Katie Johnson), a little old lady that lives in a lopsided house (bombing during the war caused subsidence) just down the road from Kings Cross station. She’s very polite and seemingly harmless, though we see her cause a baby to cry simply by approaching it and the police superintendent (Jack Warner) she speaks to is all-too-familiar with her story about a friend mistakenly thinking she’d seen space aliens, so there’s definitely something unusual about the woman.

A shadowy figure is glimpsed following Mrs. Wilberforce during her trip to town and it descends on her house, revealing itself to be the suspicious-looking Professor Marcus (Alec Guinness). He’s spotted Mrs. Wilberforce’s advert for a lodger and would like to take the room. His only request is that he be allowed to rehearse with his string quintet at the house. Mrs. Wilberforce is delighted to hear this and Marcus soon moves in.

However, this string quintet is merely a front for a motley crew of bank robbers. These include the gangster-like Louis Harvey (Herbert Lom), teddy boy Harry Robinson (Peter Sellers), heavy ‘One-Round’ Lawson (Danny Green) and stiff-upper-lip type Major Claude Courtney (Cecil Parker). Marcus has a clever scheme to knock off a security van and get Mrs. Wilberforce to unknowingly aid them in getting the ‘lolly’ past the authorities. 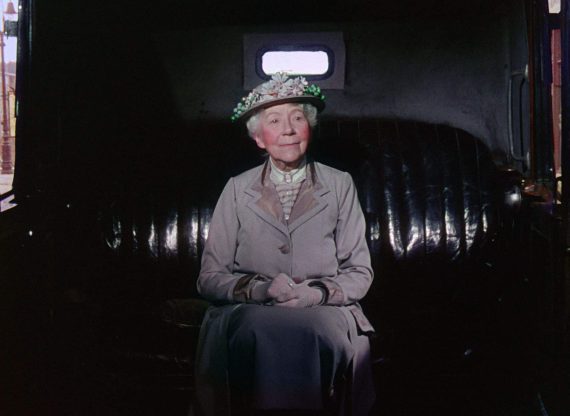 The heist goes fairly smoothly (though Mrs. Wilberforce causes a few frights) and the crew think they’re home and dry as they share out the money back at Marcus’ rented room, hiding it in their instrument cases. However, just as they head off to enjoy their spoils, ‘One-Round’ accidentally breaks open his cello case full of cash and Mrs. Wilberforce sees it.

She’s disappointed in the men and orders them to give the money back and they beg and plead with her, giving made-up sob stories about why they need the money and how no one will miss it. She’s having none of it, so instead they explain how she was part of the heist, so will be in as much trouble as them if they get caught.

This is still not enough to sway the upstanding Mrs. Wilberforce though, so the criminal quintet have to silence her, permanently. This doesn’t prove so simple though and, one-by-one, the gang themselves fall victim to each other’s greedy and deadly ways.

It’s a fairly simple, albeit darkly twisted, idea that perhaps is destined to lead in only one direction, but it’s all in the execution. Director Alexander Mackendrick only ever helmed a small handful of films, but he had a fantastic run making a number of classic Ealing comedies, including Whiskey Galore! and The Man in the White Suit, before directing his acidic masterpiece, Sweet Smell of Success. He meticulously planned out his films, being a keen advocate for using storyboards (drawn from his background in marketing), and this shows in how perfectly formed the film is. Everything works like clockwork and not a frame is wasted (other than perhaps arguably the only weak point in the film, the extended horse-cart fiasco featuring Frankie Howerd). 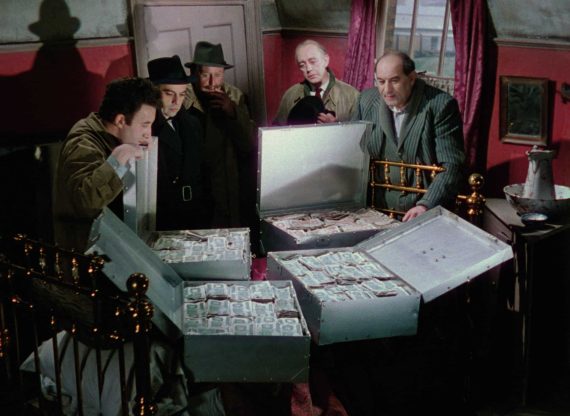 Much of this is to do with the script though of course. Reportedly, the story came to writer William Rose in a dream, fully formed and vivid. * SPOILER At first Balcon thought he was mad, wanting to make a film where all but one of the principal cast members were killed, yet calling it a comedy.* END OF SPOILER However, the producer had faith and the script was so good Mackendrick was keen to direct, despite having fallen out with Rose on their previous collaboration, The Maggie. The pair continued to bicker, in fact, causing Rose to walk off the project before his script was quite complete, but Jimmy O’Connor, Mackendrick and Holt made the necessary tweaks to get it ready for the shoot.

The script is wonderful in its beautifully told story, but also in its witty dialogue that paves the way for a laugh-out-loud funny film. The humour is further brought out by the incredible cast. Alec Guinness was the biggest star in the film at the time and he’s wonderfully over the top, in his appearance and delivery. All of the cast of criminals play up to certain caricatures to a hilarious degree (I love the way Louis carries his violin case, for instance). It was a breakthrough role for Peter Sellers, in particular, who was a relative newcomer at the time, largely only famous for his radio work with ‘The Goon Show’. Here he’s relatively restrained in comparison to some of his later work, but he still gets to show his skills as a comic performer without over-staging anyone else in the fine cast. 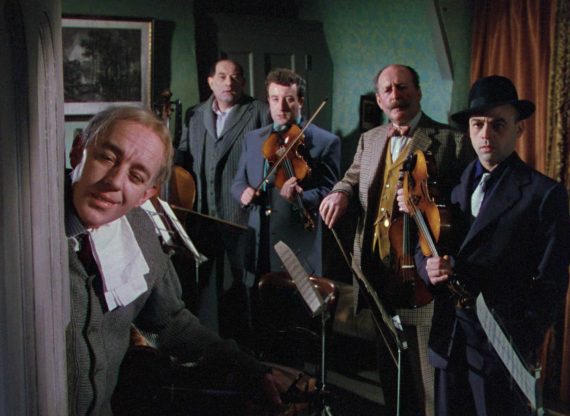 It’s arguably Katie Johnson that steals the show though. She gets that perfect balance of harmless naivety and steely inner strength that’s required for the role. She gets a number of the best punchlines too (“shall I be mother?”). Reportedly, Mackendrick was keen to have her for the part but the producers said, due to her age (she was 76 at the time), the insurance would be too high. Johnson heard about this and offered to pay the extra premium herself, but Mackendrick wouldn’t have it and they paid out for it in the end. She’s immensely lovable and the film hinges on Mrs. Wilberforce, so it wouldn’t have been half as good without her in the role.

The film looks good too. It was supposedly the last British film of the time to use the three-strip Technicolour process. It’s not garishly coloured, like a lot of the films (often musicals) that adopted the format, though some reds pop out. Instead, we get some ugly greens for the criminals’ hideout countered by soft pastels for Mrs. Wilberforce. Mackendrick also references his idol, Fritz Lang, with great use of shadows and smoke, conjuring up some expressionistic imagery.

There’s even a very well executed heist scene in the middle of the film that wouldn’t look out of place in a Hitchcock thriller, so it’s not just in comedy that the The Ladykillers excels.

Like much of the rest of Ealing’s finest then, this is wonderfully scripted, directed and performed, taking a deliciously dark yet delightfully charming approach to comedy. With a splash of colour and some finely directed set-pieces on top, this is nigh-on perfect filmmaking and immensely rewatchable. 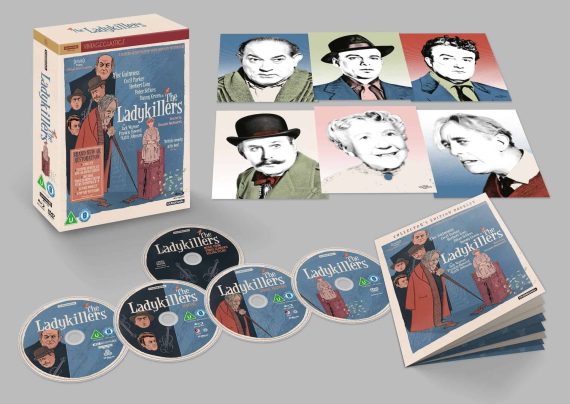 The Ladykillers will be released in cinemas on 23rd October 2020 and a 5-disc 4K UHD Collector’s Edition set (and standard Blu-ray and DVD) will be released on 9th November 2020 and is available to pre-order HERE. I watched the Blu-ray version (I haven’t gone 4K yet) and it looks and sounds pristine. It’s an incredibly detailed picture that retains the slightly unnatural but beautiful technicolour look. You also get a choice of two aspect ratios, as the originally intended ratio is under question (it screened in both formats). I opted for the full-frame version to get the maximum amount of image. The wider version has been cropped, but this is how they created such prints back in those days, so may have been intended. I had a quick skim through the wider version and found it more claustrophobic, which some may say is beneficial to the film, but I still preferred the ‘fuller’ look.

I didn’t receive the booklet or CD, but the bonus material on the 2 Blu-rays I did get was wonderful.

Philip Kemp’s commentary is fantastic – loaded with interesting facts and amusing quotes. The only disappointment is that he chooses to go quiet for a few minutes at the end to let us enjoy the writing and performances of the climax.

‘Investigating the Ladykillers’ is very much a love-in, but the contributors do feel genuinely passionate about the film and there are some interesting thoughts on it.

‘Colour in The Ladykillers’ is more analytical, so offers a more studious look at the film, which is welcome. The locations featurette allows those familiar with London see how and where they shot the film, so is worth a look too.

The two period documentaries, ‘Made in Ealing’ and ‘Forever Ealing’ are excellent. The former is a segment purely digging into the production of The Ladykillers, including interviews with many of the principals. The latter is a warm, enjoyable potted history of the studio as a whole.

The two audio interviews are hidden treasures. They both run a little over an hour and a half each, so are very extensive and contain some fun anecdotes and interesting information about the nature of the pair’s work for the studio.

So, a fantastic package all around. It’s one of my favourite single-title releases of the year, alongside another couple of Studiocanal titles, Flash Gordon and Bill and Ted’s Excellent Adventure. The label are on fire at the minute.