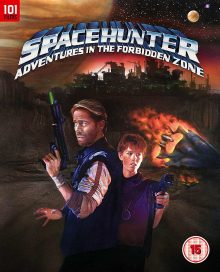 Spacehunter: Adventures in the Forbidden Zone is one of my more memorable adolescent ‘go-to’ movies; a ‘cult classic’, if you would like to say. This movie redefines ‘camp’ for the post-apocalyptic space adventure and, considering that it was shot for an 80’s 3-D audience it still stands up well today. An easy post-convert using the current stereoscopic technology would see this really shine as a great 80’s 3D film in all of its glory.

The plot is simple, Wolff (Peter Strauss) receives an SOS message to retrieve three female survivors that crash-landed in an escape pod from a doomed cruiser Starship onto a planet that is quarantine restricted and controlled by the evil ‘Overdog’ (Ironside). Basically, nobody is supposed to go anywhere near this planet! Wolff’s motivation to rescue the three women is not only due to the fact that they are sexy damsels (he already has the equally stunning Chalmers by his side) but mostly for some serious ‘mega-credits’. So, the scene is set, and Wolff is quickly joined by Niki (Ringwald) who is annoying and a pain-in-Wolfe’s rear-end, and by Washington (Hudson) Wolff’s ex-army buddy.

Peter Strauss (Wolff) and Molly Ringwald (Niki) are both great in their roles. Strauss is refreshingly down-to-earth as the garbage (asteroids?) collecting Han Solo sort of space bum. Instead of Chewbacca, his sidekick is a sexy female android engineer companion called Chalmers (Andrea Marcovicci). He’s more interested in ‘her’ than actually letting her fix the ship, which says a lot about the guy. Niki (Ringwald), whose whine as a character would give God a headache, has got the right proportion of courage and vulnerability to create a believable, loveable, sassy, and fiercely independent space orphan. 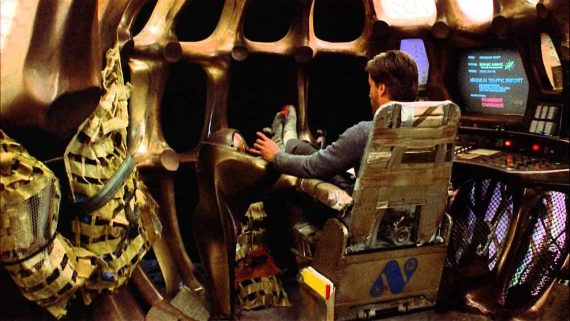 Now, 37 years later (God, has it been that long?!) I get to see the film again on Blu-ray. One of the producers is the legendary Ivan Reitman.

Yes, there are flaws, but if you forget awkward gender politics, (just forget about being ‘woke’ for a moment) the film still has a sense of excitement and adventure that many other sci-fi flicks now lack. The action is fast-paced, the credits worthy of any 80’s disco rave and Elmer Bernstein’s score is heroic and gives an epic feeling to the film. The effects for today have flaws, but remember it’s 37 years old! They built real models back then – not CGI; yes, real models!

Michael Ironside plays the main villain, ‘Overdog’, underneath all the heavy prosthetics make-up, and he truly offers a great camp performance, in a costume that I had to wonder how the hell he actually got around in it. I was thrilled to see Ernie Hudson (Ghostbusters) as a supporting character, playing Strauss’s solider-in-arms ex-buddy, Washington. Ernie brought to the role a certain comical style, yet it’s quickly established that he’s not to be messed with. 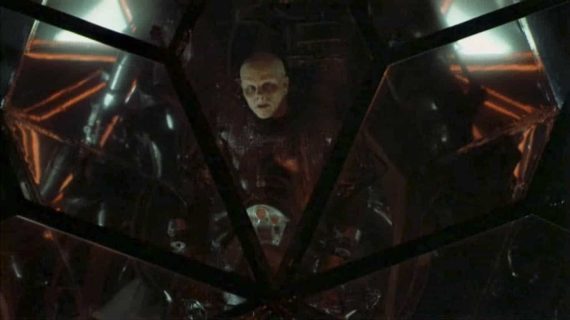 Yes, the film consists of not one, but two blocks of cheese; the dialogue gives many laugh-out-loud moments and Ironside, in particular, is superbly camp and humorous as a super-cool villain. He really deserved to survive – ‘Spacehunter 2: The return of Overdog’, anyone?

Still, you know what? This movie holds a very special place in my heart. Let’s face it; they just don’t make them like this anymore. One of my all-time favourite pieces of dialogue has to be (Spoiler alert ahead) when Wolff is finally rescuing the three screaming damsels from Overdog, and he shouts at them: “Will you PLEASE shut up? I’m trying to rescue you!” Plus, on top of it, Ernie’s character (being the black guy) does not get killed off in the first five minutes and he actually saves the day in the end, which is a true testament to the storytelling. It all comes down to teamwork and actual friendship (plus the fact that Washington can’t get off the planet without Wolff’s help) that makes this film so memorable.

This ranks as being one of the few post-Star Wars movies that deserve a sequel (which I’m tempted to have a bash at myself – if you agree drop us an email here at Blueprintreview).

So, to sum up during this time of uncertainty, sometimes we need some classic cheese to make us smile, laugh and to believe in honest, down-to-earth heroes rescuing the day.

101 Films have recently released Spacehunter as a good looking transfer on Blu-ray.