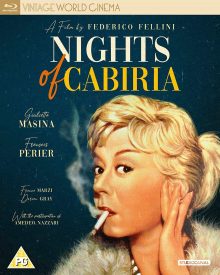 Federico Fellini was a giant of world cinema back in the early 60s and he remains popular among cineasts, though his later films weren’t as well-received as those made in his prime. He’s one of those rare directors outside of Hollywood that is quite widely known among even those only mildly interested in films. He died back in 1993, but he would have been 100 years old this year, so a few distributors are celebrating by re-releasing remastered prints of Fellini’s work in cinemas and on home video formats. Among these are Studiocanal, who are releasing two of the director’s earlier films, The White Sheik and Nights of Cabiria on Digital Download, DVD and Blu-ray, as well as touring the latter in selected cinemas around the UK. I thought I’d join the celebrations by reviewing Nights of Cabiria (a.k.a. Le notti di Cabiria) on Blu-ray.

The film stars Fellini’s wife Giulietta Masina as Maria ‘Cabiria’ Ceccarelli, a prostitute working the streets of Rome. The film opens with her getting pushed into a river by her supposed boyfriend, who steals her handbag and runs away. Her luck with men doesn’t get much better, as she’s used or mistreated by every one she meets. She attempts to find salvation through a passing visit from the Madonna but gets no results. Her fortunes look to change, however, when a kindly accountant sees Cabiria bare her soul at a hypnotist show and falls in love with her.

I’ve been slow in working my way through Fellini’s films after being disappointed with La Dolce Vita, which put me off for a while. However, the subsequent films of his I’ve seen have all impressed me, including Nights of Cabiria, so I’ll certainly be speeding up my trawl through his back-catalogue.

One thing I enjoyed about Nights of Cabiria is its balance between tragedy and optimism. The mistreatment Cabiria goes through in the film would normally make for a dreadfully morbid and depressing film, but the character soon shakes off her troubles and pushes on with a smile on her face and spring in her step. This might sound like pure schmaltz, but Fellini doesn’t allow this upbeat attitude to offer any sort of solution to Cabiria’s problems and we get enough glimpses of her inner pain to realise her smile is largely just a front. This means the film operates on a bitter-sweet tone that I very much appreciated. Cabiria is never happy and cheerful in a saccharine way either, rather she’s fiery and passionate, with a zest for life.

Key to making this work is Masina. Fellini’s La Strada provided her breakthrough role, but here is where she took it a step further and bagged several awards, including Best Actress as Cannes. Rightfully so, as she’s absolutely fantastic. Her face and body are wonderfully expressive. This might be dubbed exaggerated, but it fits her character who paints fake emotions to hide the realities of her troubled life. She delivers such a vibrant and charming performance, even through her character’s aggressive actions, that it’s an absolute pleasure to watch her on-screen. Yet, equally, she portrays the depth required to flesh out Cabiria beyond a straight-forward tragic figure. 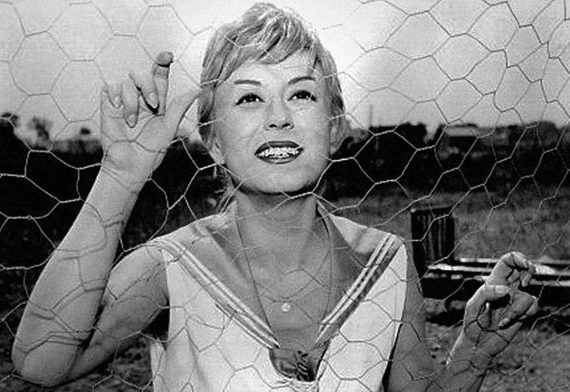 Also aiding this human approach is how Fellini fills many of the scenes with life. Other than in a handful of necessarily intimate scenes, the world on screen is packed with supporting characters and extras that, often noisily, bring it to vivid life. The street scenes with Cabiria’s fellow prostitutes and pimps, for instance, are wild and enjoyably raucous. There’s also a key scene when Cabiria visits the Madonna and struggles to fight her way through the hordes of people crowding in to either get their own wishes granted by the divine figure or to hawk their wares to the crowds.

The vulgar atmosphere in this scene and lack of help the visit provides our protagonist and her friends paints a poor picture of religion in the staunchly Catholic country. Strangely enough, the film was censored by the church but not for this scene. The only sequence cut (which has been restored in more recent years) was one in which Cabiria meets a man who regularly brings food to the poor. The church didn’t want this non-religious figure to be shown to be the only concrete aid to the destitute, so took him out. 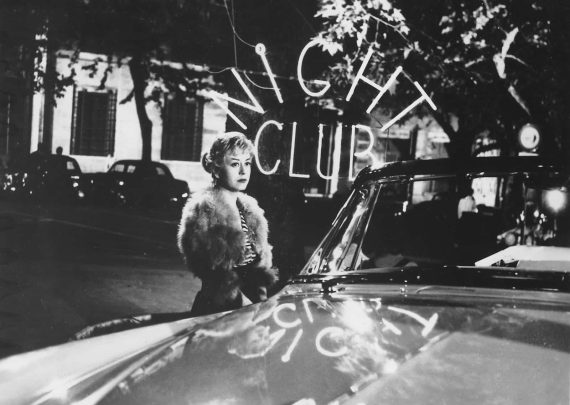 The film looks gorgeous too. Great use is made of locations and production design to portray a range of settings, from the arid area in which she lives to the lamplit streets on which she works, to the glamorous world she glimpses when getting picked up by a movie star, and even to a couple of beautifully scenic locations when she thinks she’s found love. The cinematography makes effective use of light and shadow in the night scenes and daytime sequences are often starkly bright and revealing.

Overall then, it’s a wonderful film from the master that’s deeply tragic but brims with life. Aided by an astonishing lead performance, it has a vibrancy that prevents it from getting maudlin or preachy. Excellent stuff.

Nights of Cabiria is being released by Studiocanal on Digital Download, Blu-ray, DVD on 6th April. This new 4k restoration is also screening in a few select cinemas around the UK. The remastered picture looks fantastic – clean and detailed with a high dynamic range. The audio is solid too.

It would have been nice to have more extra material, but Kemp’s interview is illuminating. It discusses several of Fellini’s films produced around that period, so it’s not purely about Nights of Cabiria but still aids appreciation of the film.