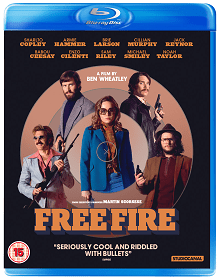 In an abandoned factory in 1970s America, a gun deal is occurring between two IRA members, a South African arms dealer, their respective associates and two Americans who have set up the switch. Unfortunately for everyone the deal doesn’t quite go to plan, and as shots are fired and lines are drawn what should have been a straightforward transaction becomes a brutal struggle for survival.

Ben Wheatley is not known as a crowd-pleasing director. He doesn’t seem to have ambitions of box office records and an A-list status. His previous films are affectionately described as quirky or off-beat, but could more accurately be deemed macabre, insane and just plain weird. Personally I enjoyed the grim twists of Kill List and the twee ludicrousness of Sightseers, but found High-Rise to be messy and too dull to finish. Free Fire, however, is easily Wheatley’s most accessible feature to date, utilising a simple but engaging and action-heavy plot, bright colours, loud noises and a cast full of recognisable actors, including recent Oscar winner Brie Larson. Yet frustratingly Free Fire remains tragically underseen by many, which is a shame because it’s really bloody good.

The opening half hour is a masterclass in ramping up tension, as the various groups gradually grow closer and pieces are put into place as to just how poorly this situation is going to turn out. It’s a perfect storm of characters lacking respect for each other, showing up with the wrong merchandise, serious past grievances, a monumental absence of trust – as is to be expected when undertaking a criminal endeavour – and characters being utterly despicable human beings. Sharlto Copley’s mis-diagnosed child genius Vernon and Sam Riley’s smack-head wastrel Stevo are easily the worst of the bunch, but no matter how awful their actions, it remains a joy to watch these incompetent fools plough ever deeper into their mire of poor decisions. 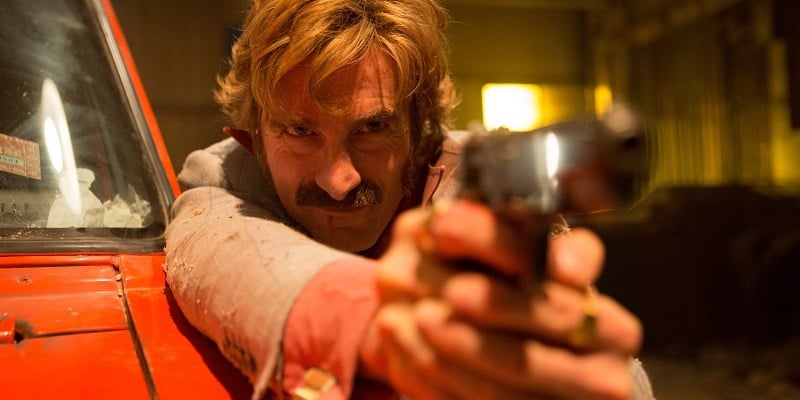 As expected with an ensemble cast, some actors get more to do than others. Surprisingly Cillian Murphy is left in the cold with very little to do despite being essentially the head of his team, ending up sidelined with a tacked-on potential romantic sub-plot with Brie Larson’s Justine that feels very much like a studio note. It adds a different flavour to the proceedings, but it would have been nice for Murphy to have had a little more to do elsewhere. Larson is also terrific but a little under-used, whereas Armie Hammer is great fun as the most competent person in attendance, and gets many of the best lines. Elsewhere I’m always a fan of Noah Taylor and Wheatley regular Michael Smiley, so was happy to see them both here, and Jack Reynor, previously best known for Transformers: Age of Extinction and as the older brother in Sing Street, was a pleasant surprise as a guy you’ll often side with simply because he’s slightly less of a dick than others around him.

What’s perhaps most unique about Free Fire is the more realistic approach it takes to injuries in comparison to other action movies of its ilk. It’s not much of a spoiler to say that not everyone gets out of this film unscathed, or indeed alive, but it’s refreshingly low on one-shot kills and melodramatic, overblown death scenes. In this film, when you get shot, you stay shot, meaning that after the first slug swapping session, most of the players are still active, but less than half of them are able to walk. A great deal of the film is spent with everyone hobbling, limping, crawling or entirely immobile, and it’s all the better for it, as it leads to some hilariously slow chase sequences as plot developments and realisations send survivors on side missions and vendettas. Similarly the methods of dispatch are varied too, meaning not everyone goes out via simple bullet wounds, there’s a lot more fun to be had than that. 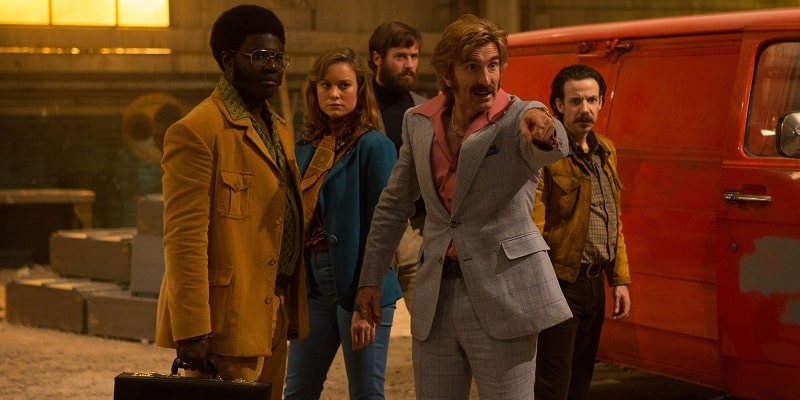 It’s at times farcical – at one point the characters literally do a school register-style head count to remind us where everyone is and who they’re trying to kill – although if you’re paying attention it’s pretty straightforward and difficult to get lost in, especially when the question “Why are they all shooting at each other?” can usually be answered with “Because they’re all idiots.” Most satisfyingly of all, the film concludes in a manner that feels genuine and earned. This is easily amongst the best films of 2017 so far, and really is a must watch.

Free Fire is available on DVD and Blu-Ray from Studiocanal. The Blu-Ray contains an audio commentary with Ben Wheatley, Cillian Murphy and Jack Reynor, a Making of Free Fire featurette and interviews with the cast and crew.