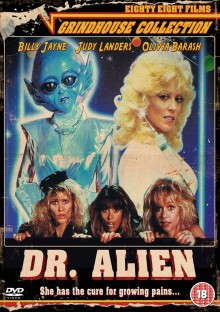 Dr. Alien opens with an unnecessary car flip caused by an alien spacecraft sighting, followed by a garish title card bursting on to the screen. Yes it’s the 80’s boys and girls. While this opening sequence suggests an action sci-fi extravaganza, Dr. Alien is actually more of a Porky’s style teenage sex romp with a sci-fi spin.

Wesley isn’t the most popular boy in school. He’s a class A nerd with a much cooler younger brother and a slightly cooler but much more perverted friend. Wesley falls for Leanne, the school’s hottie, but has no chance with her due to a lack of confidence and social skills. That is until he takes some after school ‘classes’ with his well-endowed new science teacher Ms. Xenobia.

Along with her creepy assistant Drax, Ms. Xenobia uses Wesley as a science experiment, injecting him with bright green goo (is there any other type of goo in these movies?). This special injection causes Wesley to become super cool and irresistible to all women. Unfortunately it also causes a strange tentacle which looks like a leathery penis with an arsehole for a mouth to come out of his head. This doesn’t seem to put off the ladies though and Wesley proceeds to make the most of his new powers with Leanne. Things don’t always go according to plan though, especially when the ‘scientists’ get involved in their quest for results. 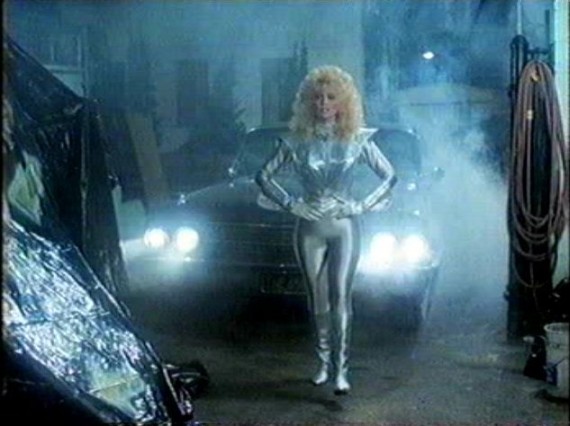 This is not a film to be discussed or dissected as you’d imagine so I’ll try and be brief. Your enjoyment of the film will be down to your appreciation of the trashy, immeasurably silly output of executive producer Charles Band, production company Full Moon and its ilk. Personally I love a bit of trash so I actually enjoyed Dr. Alien quite a bit. Thankfully it knows what it is and keeps its tongue firmly in its cheek at all times. The script, while hardly Shakespearean, is fun and loaded with bad gags at such a pace that their poor quality is redeemed by sheer volume and some fairly obscure in-jokes cause the occasional welcome surprise. The low rent direction and performances stop it from ever truly lifting off though.

On top of obvious flaws in quality which I expected and didn’t let bother me, the main aspect that did disappoint is the ending. The first two-thirds of the film fly by, but a random diversion where Wesley joins a hair metal band slows the film down and the finale is a sappy, anti-climactic wet lettuce which spells out the obvious fact that the freaky changes Wesley goes through are symbolic of the changes all teenagers ‘enjoy’.

So as silly 80’s sex comedies go you could do a lot worse, but a weak ending and a reliance on its audience to let quality issues slide mean its hard to justify more than an average rating.

Dr. Alien is out now in the UK on DVD, released by 88 Films. The sound and picture quality is far better than a film like this probably deserves.