Chan-wook Park’s latest genre-bending film is the vampire comedy/drama/horror Thirst. Due a DVD and Blu-Ray release in the UK on January 25th, this is a film to please fans of Park’s Vengeance Trilogy, serving up similar doses of extreme violence and rich black humour. Personally, I’m one of these fans so I lapped it up.

Sang-hyun (Kang-ho Song) is a dedicated priest who wants to help people more practically, so signs up to a vaccine research programme for a deadly virus. The vaccine doesn’t work though and as his condition reaches a critical point, doctors give Sang-hyun a blood transfusion, which although miraculously curing him, has the adverse effect of turning him into a vampire. His transformation gives the well-meaning man not only a lust for blood but also a craving for sins of the flesh. This causes him to embark on a sordid affair with an old friend’s unhappy wife (Ok-bin Kim), who longs for a more exciting existence and when she discovers Sang-hyun’s secret she wants to share his infliction. 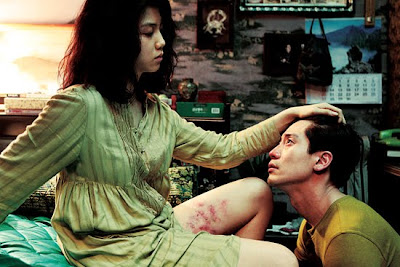 As with all of Park’s work, Thirst is a very dark and original film with some disturbingly beautiful imagery. On a visual level, the film is outstanding, serving up a grimy, shadowy world that the director has clearly meticulously planned for all departments as it has his signature all over it. It certainly doesn’t feel like a retread of his previous work though, with a little more focus on black comedy and no themes of vengeance of course. As with those films, this again gets pretty hard-hitting and disturbing in the latter third, but the final scene turns all of this on its head with a perfect blend of black humour and touching drama.

It’s not always perfectly balanced though, with a few pacing issues and some confusing plot elements. In general, the film could have been trimmed down a little, there are so many ideas in there I think losing a few wouldn’t have harmed the film. An extended sex scene in the middle felt overly drawn out for instance. These are minor quibbles though when a film is this successful in subverting genres and offering up an original, intelligent cinematic experience as opposed to the Twilight franchise and other cookie-cutter vampire nonsense served up by Hollywood. 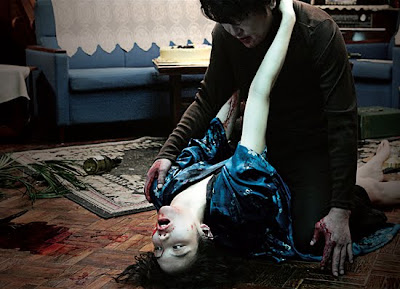 It’s an incredibly visceral experience as you’d expect from the man that brought you the hammer fight and live octopus scenes in Old Boy and the frighteningly brutal scenes of revenge in Sympathy For Mr (and Lady) Vengeance. I didn’t find any of Thirst to be as uncomfortably nasty as some of those films though, with the humour and fantastical genre leanings being more apparent. That said, it’s still awash with blood and it does get grisly at times with some painfully realistic neck and bone-breaking scenes standing out in particular.

Although I didn’t find it quite as powerful or memorable as Sympathy For Mr Vengeance or Old Boy, I would say this is Chan-wook Park’s most entertaining film and deserves as much success overseas as those found. Anyone who isn’t familiar with his work should remedy that immediately and catch this on DVD or Blu-Ray, you won’t regret it.

DVD features: There aren’t many features on the UK release, just a trailer and an interview, but the interview is a decent addition offering a brief but interesting insight into Park’s filmmaking techniques. The Blu-Ray version also has edited highlights from an NFT Masterclass, but I only managed to get my hands on the DVD so I couldn’t tell you if that’s any good.