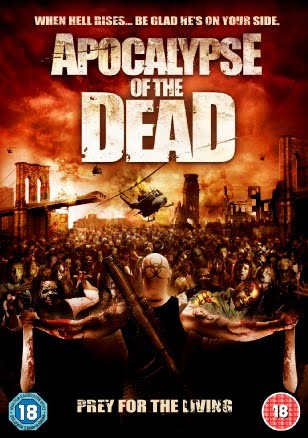 Apocalypse of the Dead (AKA Zone of the Dead) is a low budget Serbian zombie B-movie due a UK DVD release in March. Featuring a lead performance by Ken Foree, star of Dawn of the Dead and featuring a plot combining Night of the Living Dead with Assault on Precinct 13, Apocalypse of the Dead is clearly made by fans of the horror and exploitation genres. So the question is can these first time directors channel their fan-love into something close to it’s influences?

Well the short answer is no. Apocalypse of the Dead shuffles (and runs) down a well-trodden path of zombie-movie clichés. The premise is that an experimental gas which can bring dead cells back to life is being transported across Serbia. Things go wrong of course and the gas container is accidentally blown open unleashing a zombie plague across the city of Pancevo. Our protagonists are chiefly a group of Interpol agents transporting a dangerous prisoner to Belgrade who end up having to work together to fight off the hordes of the undead surrounding them. Along the way they meet some teenagers coming home from a wild party, an old English professor and a psychotic bible-quoting skinhead with a never-ending arsenal of weaponry at his disposal. 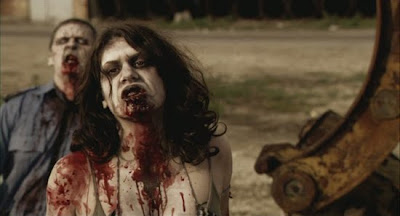 That last sentence probably perked the interest of action and horror fans, but unfortunately the skinhead is criminally underused, only really pulling out all the stops at the end of the film. Plus, although he provides the film’s most fun moments, he’s also one of the weakest actors, struggling to deliver his pretentious dialogue with any conviction. The performances in general are a real sore point in this film. Now I usually don’t care too much about the acting in zombie movies, but here it’s really quite painful. The main cast members aren’t the worst I’ve seen, they fit in with the B-movie vibe (Foree has some nice moments), but most of the supporting cast are Serbian actors forced to speak English all the time (even to each other), probably in an effort to make the film more appealing to an international audience. It means that anyone not in a starring role is either badly dubbed or stumbles through a language that is clearly not their mother tongue. Why they didn’t just subtitle all of the Serbians and keep the main cast members speaking English I’ll never know – their characters are supposed to be from the US anyway.
Buy Plavix Online Pharmacy class=”aligncenter” src=”http://4.bp.blogspot.com/_qGB5Bq23UcM/S3HGfeVvuCI/AAAAAAAAARU/kAQWRvcr3W0/s400/vlcsnap-115082.jpg” border=”0″ alt=”” width=”400″ height=”215″ />

As I said though I can usually forgive cheesy performances in a film of this type, but unfortunately it didn’t deliver in the departments that matter either. For me a genre movie succeeds if it either does something original with it’s concept, goes way over the top in the exploitation stakes, or simply does what that genre does best (i.e. scares or excites). Apocalypse of the Dead never really does any of these. The filmmakers do nothing original at all, apart from maybe set it in Serbia. Every zombie cliché you can think of is included, from the group member being bitten early on who will need to be killed at some point (I’ll let you guess when) to the old character asking to be left behind to die. As for going over the top and doing what a horror film does best, this is where the film disappointed me most. The film starts very poorly, largely because it Buy Diflucan Online Pharmacy No Prescription Needed relies heavily on the terrible supporting cast, but also because it takes a while for any serious zombie carnage to kick in. The only really impressive and exciting scene comes at the film’s finale when the survivors have to fight through a vast wave of the living dead armed with a variety of guns and a samurai sword. This scene is great fun, but was too little too late for me. There are one or two moments in the middle which are entertaining enough too, such as a decapitation by harpoon, but generally it’s just a queue of cheaply reproduced scenes that we’ve seen many times before. 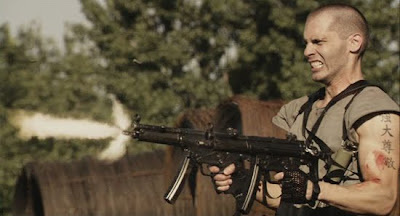 I generally like to give all types of films a chance, especially horror and action movies because I’m a fan of the genres. Apocalypse of the Dead however just felt a bit lazy. The potential was there for a fun ‘beer and buddies’ movie, but it’s overuse of actors working away from their native tongue and far too many clichés just left me wanting to revisit better films. Those who are big zombie fans and don’t want anything extra added will get a few kicks from this, but I’d prefer to whack Evil Dead on again.