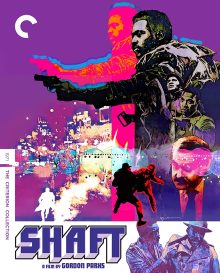 Released the same year as Melvin Van Peebles’ Sweet Sweetback’s Baadasssss Song (often thought, incorrectly, to be the very first Blaxploitation film – Cotton comes to Harlem was released the year before), the less radical, Hollywood-financed, Shaft, is still an important film in the annals of Black cinema and has been very influential over the years. It’s likely that without the success of these three key films Black cinema would not have inspired a new generation of black actors who later made it big in Hollywood pictures; for example, Denziel Washington, Eddie Murphy, Cuba Gooding Jnr and Samuel L. Jackson.

The excellent Criterion label have, in their obviously infinite wisdom, re-released Shaft in a special edition, commemorating it’s 50 years + of existence with a great transfer and more extras than you can shake a stick at.

But, first, I should say something about the film itself. The ‘Shaft’ of the title is John Shaft (Richard Roundtree), an ultra-cool, overly confident, but smart, private investigator who operates in New York and walks around his territory in his long leather coat with a cocky strut, as if he owns the place. Respected and feared by the majority of criminals and even some cops, Shaft is good at getting himself into tight spots, but is also good at extricating himself from them too. 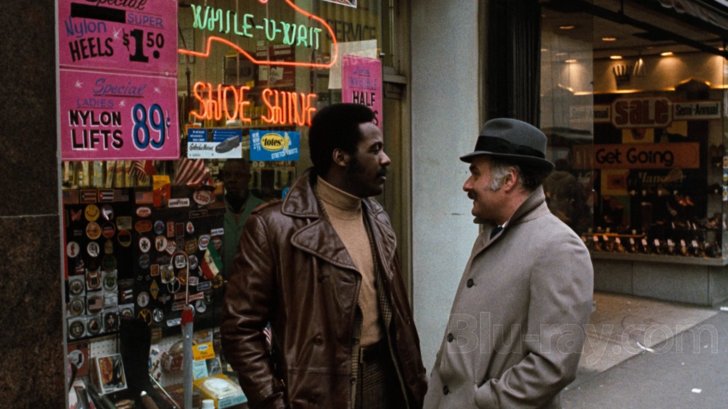 In this first instalment of the Shaft trilogy he’s asked by gangster Bumpy (Gunn) to get his kidnapped daughter back, since the boss-man doesn’t understandably feel comfortable going to the police. Obviously the cops know something is ‘going down’ on the streets and try to get Shaft to ‘spill the beans’, but he plays his cards close to his chest until he determines that the girl is going to be safe.

The film culminates in an exciting rescue by Bumpy’s gang, led, temporarily, by Shaft, against another gang; American Italian mobsters. And, before that, we follow Shaft moving around the Big Apple doing his private dick shtick, and, at times, using his own private…, well, you know what I mean!

Richard Roundtree is excellent playing John Shaft, despite him having only limited screen acting experience before he got the Shaft gig. The iconic opening sequence, which sees him emerging from the subway, stalking the streets and crossing a busy interchange when the lights are green is a powerful introduction to the character, underlined perfectly by Isaac Hayes’ justifiably iconic and award-winning score. 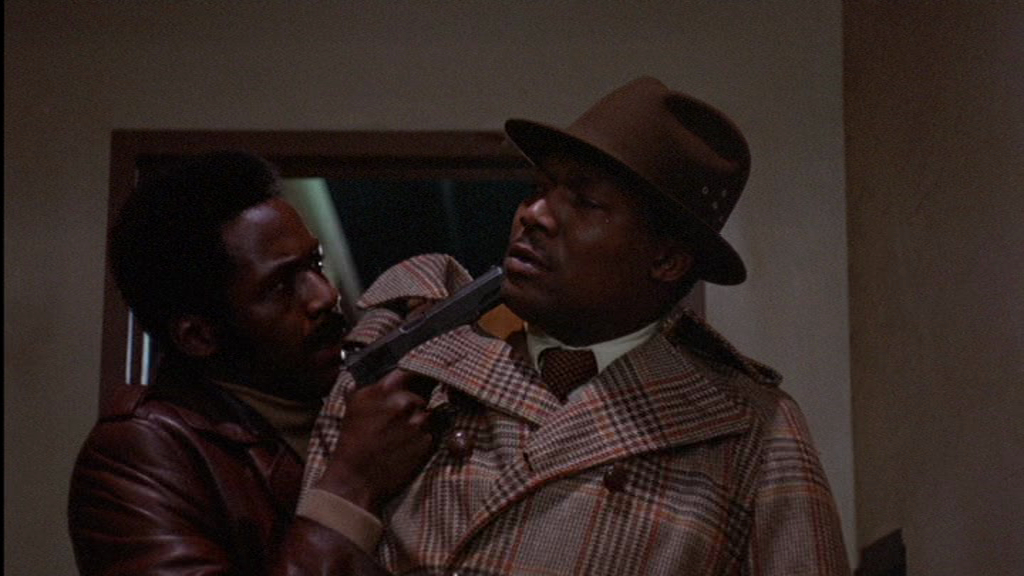 Roundtree isn’t the only actor to excel in his role; he’s surrounded by great supporting actors, especially Charles Cioffi, who plays Lt Vic Androzzi, the police lead investigator. He and Roundtree have some great scenes together with some very amusing, but believable banter. For example: Lt – “Where are you going?” Shaft – “To get laid!” Later on; Lt – “So, John, what you got?” Shaft – “I got laid…” Cop – “You ain’t so black.” Shaft- “And you ain’t so white…” Mobster – “I’m looking for a nigger, named John Shaft.” Shaft – “You just found him, wop…”

Some of the other cops are openly racist towards Shaft, but it’s clear that Lieutenant Androzzi has quite a bit of respect for Shaft’s innate intelligence and actually quite likes him, hence him giving him a break, or two, during the film. Moses Gunn plays Bumpy in a layered way; on the one hand he’s an unpleasant gangster, but on the other he’s just a concerned father, inwardly regretting some of his decisions that have clearly put his own family members at risk.

Probably one of the more controversial aspects of the film is the interracial sex scene between Shaft and a Caucasian lady who flirts with him. The next morning, clearly satisfied by what he’s delivered, she wants more, but John is preoccupied with the case so sends her away, much to her annoyance. Anyway, he’s already got a black girlfriend/wife so he obviously wants to avoid further complications! 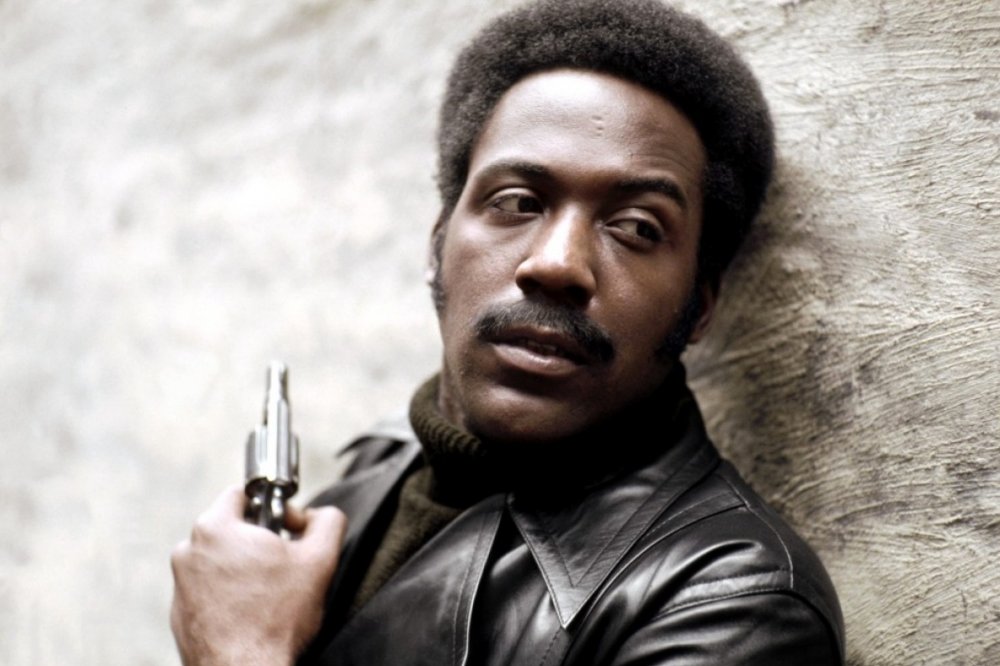 Also, of note, regarding John Shaft, is that he’s three dimensional, in that we can clearly see that he’s an educated man, and reads a lot, is generous (with tips and the like), but also uses people to get what he wants. And this makes him not only interesting, but also someone that we can relate to and, in time, come to care about, hence when he does get hurt at one point we are immediately concerned for his wellbeing; this kind of writing is sadly in short supply in most film genres, let alone those with a more action-bent.

While not a perfect film (some of it is rather dated now, and the sound is a little ‘soft’ at times), Shaft is still an excellent watch, replete with one of the greatest film scores ever written – in fact Hayes was giving characters their own themes before John Williams popularised the trend with Jaws. 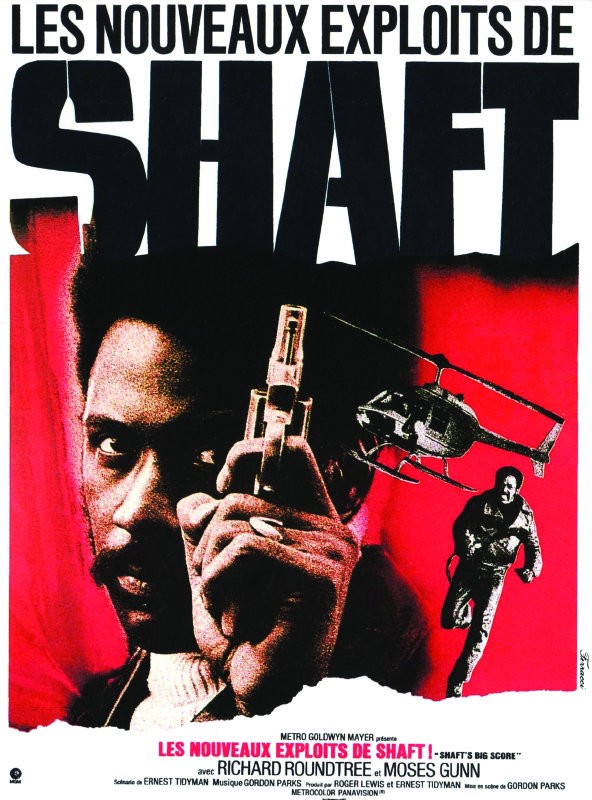 Shaft is being distributed by Criterion on Blu-ray. There are plenty of extras on the double disc set including:

Revisiting Shaft – A documentary featuring curator Rhea L. Combs, film scholar Racquel J. Gates, filmmaker Nelson George and archive interviews with director Gordon Parks (33 mins). The interviewees discuss the significance of the film as a factor during the 70s, whereby audiences reoriented how they saw ‘blackness’. Apparently MGM were struggling at the time and decided to take a punt on it as they were getting desperate. We also learn that it was Gordon’s idea to make Shaft have a moustache, in likeness of himself! This doc also features some great footage of Isaac Hayes with Parks in the studio, composing the theme.

Soul in Cinema: Filming Shaft on location (11 mins) – Shot during the production of Shaft, we see the bar scene shoot, and witness Parks directing Roundtree. One point of interest is that during the finale action sequence a couple of the white stuntmen are blacked-up!

Richard Roundtree interview – conducted by Iyare Igiehon at the NFT on 26/9/2010 (12 mins) – A lovely interview where Rountree is very relaxed and explains how he got into acting, in between driving cabs, and how, at the film’s premiere, he took along his gran, then 102 years of age. He admits to not handling fame well at the start, having a case of believing his own hype, but gran sorted him out! Roundtree really liked Hayes and reveals that the bass riff came about while they were just warming up.

Isaac Hayes – 1974 episode of the French TV series Point Chaud (34 mins) – A mix of interview and clips from the band gigging, this is interesting, especially the outrageous costumes they wore at the time. Hayes admits to having originally been a vocalist in church, where he also played a bit of saxophone. He also reveals that he does all his arrangements by ear, since he’s had no formal training. It was also good to see another left-hander for once…

Soul Sound (12 mins) – Music scholar Shana L. Redmond explores the soul traditions in Isaac Hayes’ score. Apparently, Hayes was originally an R n’ B musician, modelled on some of the gospel music that he grew up with.

Styling Shaft (16 mins) – Interview with Joseph G. Aulisi, the costume designer on the film. He discusses his collaborations with Parks and the origins of Shaft’s iconic look. They used leather as it reflects the light at night, and Roundtree looked good in a Turtleneck. Apparently they had issues with his trousers, which split during the action scenes.

Promotional shots – Including the trailer, a teaser and a radio spot. It was rated R, hence the voiceover says: “If you want to see Shaft, ask your mamma!” 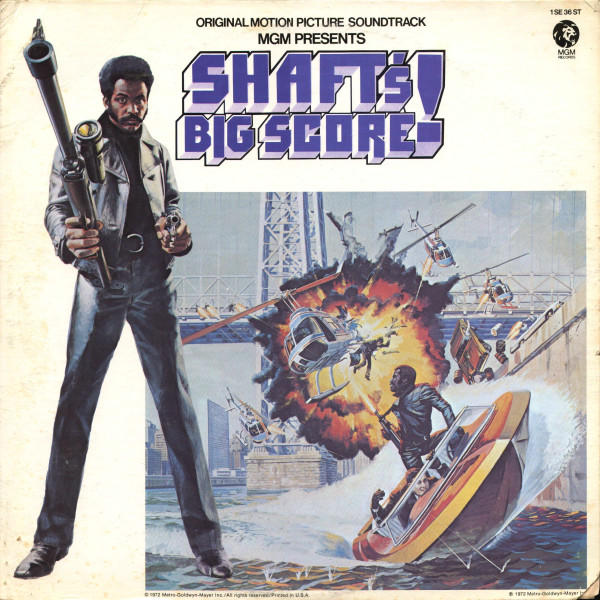 Bonus feature – Shaft’s Big Score (1972). Not as good as the first film, Shaft’s Big Score is still worth a watch as John is asked to help out a friend involved with an insurance scam. Sadly we lose the original lieutenant but there’s still plenty of good banter, for example: Inspector: “What do you think?” Shaft: “Stay away from black honkies with big flat feet!” This sequel probably has more action in it, but the plot gets a little convoluted, with too many bad guys, which somehow dilutes their overall effectiveness. It’s good to see Bumpy back, but the ending is protracted to the point where it’s laughable – I guess they wanted to get their money’s worth with the helicopter! Cleary they had a larger budget with this one, with more ‘bang for your buck’, but the original is still the best. Rating 3.5*

Listen to a stranger (19 mins) – An interview with director Gordon Parks as he reflects on his youth, his career and his successes. This is a great low key interview with Parks on fine form explaining how he grew up poor but that his mother explained that blackness wasn’t an excuse for failure. Apparently he started off working as a waiter on trains before moving into stills photography and writing books, including The Learning Tree, which was later made into a picture. At this point in his life (in his 60s) he most wanted to be remembered for said book.

A complicated Man: The Shaft Legacy (15:40; 14:33; 13:56) – A three-part series from 2019, directed by Constantine Nasr, exploring Shaft in both film and literature. The series of short docs includes interviews with the likes of Samuel L. Jackson, Michael Jai White and Richard Roundtree. These are cool short-form documentaries that primarily focus on the literary history of the character and how Shaft is often seen as a unifying figure. The author of the novels, Tidyman, didn’t have Shaft with a moustache and he was less physical in the books, apparently. The third featurette talks a little more about the films that came after Shaft including Hit Man (72), Superfly (73) and Three, the Hard Way (72).

Shaft’s Big Score – Behind the scenes (9.15 mins) – A journalist interviews very chilled Richard Roundtreee as he preps for a car chase. We also meet a couple of the stunt men who are playing Richard and his female co-star. Also Roundtree reveals that he wants to be in a romantic love story next.

Trailer (3.05 mins) – An overlong trailer, but still lots of fun 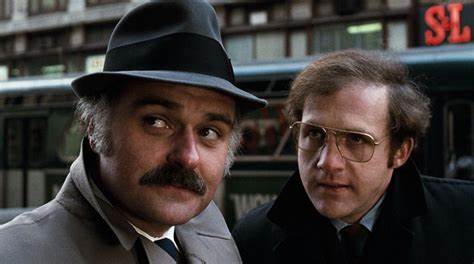