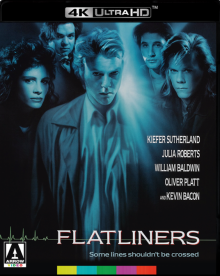 After megahit and bonafide classic The Lost Boys, director Joel Schumacher would dive back into the horror genre (though could be argued this is more of a sci-fi thriller!) with the excellent Flatliners. While not reaching the heady heights of adoration his vampire take has, Flatliners is nevertheless another brilliant genre piece that deserves much more love than its reputation suggests. Following five talented (not to mention cocky!) med students (Sutherland, Roberts, Bacon, Platt, Baldwin) who decide to dice with death by letting each other die and then resuscitate one another in order to get a glimpse at what awaits them in the afterlife, things (non-surprisingly) go wrong with each of them bringing something back from death: namely a sin form their past that now wants vengeance. Soon the young would be doctors are in over their heads as the sins of their pasts literally come back to haunt them.

Much more than a Brat Pack horror flick, Flatliners is a well-constructed and beautiful to look at thriller that dabbles in notions of death and righting wrongs. While the initial premise of somewhat conceited/know-it-all med students thinking they can cheat death is maybe not the most enticing, the young cast of future Hollywood heavyweights infuse their characters with personality and emotional arcs as the toll of what they have done soon begins to weigh on them. This is mainly a small ensemble piece, and the five principles are all great: apparently eager to do the film justice when making it. Schumacher reunites with his The Lost Boys antagonist Kiefer Sutherland as the delusions-of-grandeur leader of the pack, Nelson, but Sutherland even (eventually) renders him likable thanks to the emotional arc Nelson takes once the stakes become too high. The young cast work well together sharing good chemistry and it’s refreshing to see them stick together to try and fix what they’ve done wrong.

Schumacher elicits great performances from his cast but also brings his unique visual flair (along with the help of Jan de Bont fresh off Black Rain and The Hunt for Red October) to bring stylish filmic flair to proceedings. Creating a thick gothic hyper-visualized atmosphere, Schumacher and his crew create a world where the young students seem to exist in their own (night-time) world of heightened reality as they experiment with life and death. This all adds to the fun and creativity of Flatliners as does the fact most of the events seem to take place in a scary almost medieval looking hospital that is anything but normal. Those unable to just go with the vibe of a film may poo poo this aspect (and would be missing out on all the fun!) but it all adds to create a visually stunning film (and puts a lot of modern films with their flat murky photography to shame!) with Jan de Bont’s cinematography probably never having been better. However, Schumacher maybe does overdo the dry ice, creating so many scenes featuring background steam and mist it puts the likes of Highlander to shame!

Perhaps a little dated but certainly ripe for reappraisal, Flatliners is just as fun and intense as it was when released just over 30 years ago. A heady mix of sci-fi, drama, and eye-popping visual inventiveness, the film holds up surprisingly well, is one of Schumacher’s best, looks absolutely stunning in this new Blu ray release, and is perfect pure pop pulp. 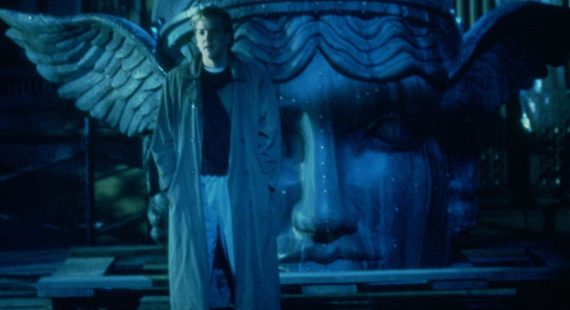 FIRST PRESSING ONLY: Illustrated collector’s booklet featuring new writing on the film by Amanda Reyes and Peter Tonguette – not available at time of review.