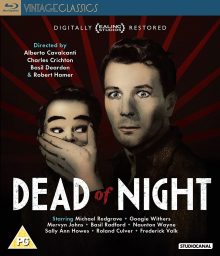 Studiocanal have reached a milestone 100 titles in their excellent Vintage Classics range and they’re celebrating by launching a brand-new website. We’re big fans of the series and have reviewed numerous titles from it. To join in the celebrations, we’re digging through their back catalogue to review a trio of favourites. First up is Dead of Night.

Ealing Studios are famous for their comedies, which often trod a fine line between light and black humour, and were always imbued with a strong sense of Britishness. However, there was more to the studio than that. In the mid-40s, they were in fact better known for making quite tough, gripping war films. Also, during this period, the studio produced something wholly uncharacteristic, a horror film. And it was a corker.

Dead of Night is ostensibly an anthology film but framing everything is the story of architect Walter Craig (Mervyn Johns). After receiving an invite from Elliot Foley (Roland Culver), Craig visits the man at his country home to discuss some proposed renovations. 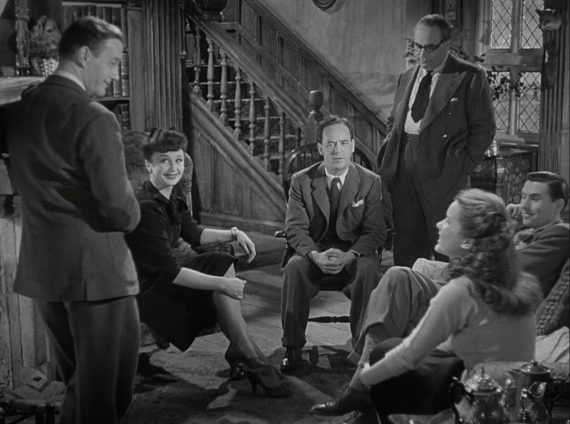 However, when Craig arrives and is introduced to a handful of other guests at the cottage, he is disturbed by the fact that the setting, situation and people he meets all match those experienced in a recurring dream he’s been having that always morphs into a nightmare by the end.

The other guests are intrigued by this and, to counter the doubts of a sceptical psychologist named Dr. van Straaten (Frederick Valk), they proceed to tell their own unsettling tales that straddle the lines between nightmares, reality and the supernatural.

I’m not usually a massive fan of anthology films as they often aren’t particularly fulfilling (due to them being made up of shorts, which I’m not particularly enamoured with either) and the quality of the individual stories can often be hit and miss. However, horror anthologies can be very effective and Dead of Night is one of the best.

Helping it stand out from the pack is the fact that the linking story is stronger than most and threads the stories together nicely, making for a more cohesive whole. It also builds to a superb nightmarish conclusion that brings back elements from all the stories. 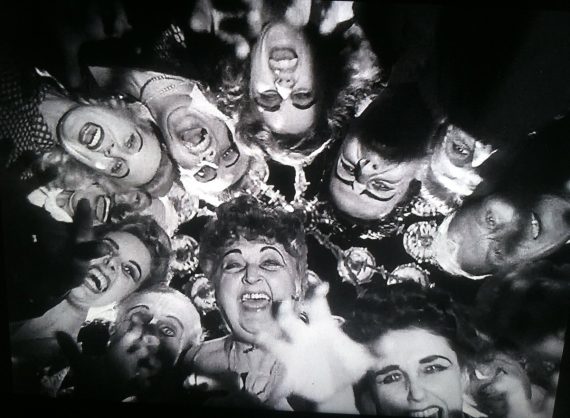 Dead of Night is most famous for its final story though, ‘The Ventriloquist’s Dummy’, which sees Michael Redgrave play a ventriloquist whose dummy appears to have a life of its own and is led by it to murder. The singling out of this segment is certainly justified, as it’s brilliantly performed (particularly by Redgrave), genuinely unsettling and beautifully shot.

However, I do feel the other portions of the anthology are well worth your time and help Dead of Night remain an enjoyable watch nearly 80 years after it was released.

The first two stories, ‘The Hearse Driver’ and ‘The Christmas Party’ both work more like anecdotes with dark punchlines, but they’re effectively done. The former has a chillingly well-conceived dream sequence where our protagonist has a premonition that will save his life later. The latter, which sees young Sally O’Hara (Sally Ann Howes) unknowingly come across a tormented spirit, isn’t quite as creepy but has a wonderfully gothic set and some enjoyable interplay between Sally and her friend Jimmy (Michael Allan).

The third story, ‘The Haunted Mirror’, almost matches ‘The Ventriloquist’s Dummy’ in my book. It sees Peter Cortland (Ralph Michael) receive an antique mirror as a gift from his wife Joan (Googie Withers), only to find that he sees the reflection of a different house and life in it. Worried about her husband’s obsession with the mirror, Joan looks into its history and uncovers a dark secret. 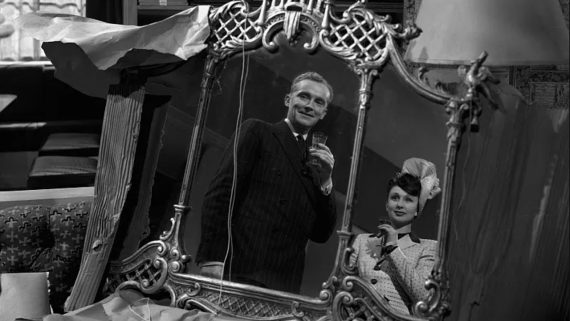 I enjoyed this part a lot, offering an intriguingly unusual concept that subtly gets under your skin rather than trying to shock or frighten using traditional methods. It’s a story that could be read into in a number of ways too, whilst building to an exciting climax to keep you watching.

The fourth segment, ‘The Golfer’s Story’, is the most divisive in the set. It tells the tale of Parratt and Potter (played by Basil Radford and Naunton Wayne, reprising similar characters to those they played in The Lady Vanishes), a pair of golfers who decide to play a round to decide who will take the hand of a girl they both pine for. When Parratt wins through cheating, Potter promptly drowns himself in a lake, but comes back to haunt his rival in the days that follow.

‘The Golfer’s Story’ is unusual in that it’s a comedy skit in amongst a horror anthology and some don’t feel it settles well. However, I think the linking story helps integrate it nicely within the film without it standing out too much like a sore thumb. I also rather enjoyed it, despite some daft and dated elements. Its humour is decidedly dark, which helps, and I enjoyed the way it satirises traditional British attitudes (a point some might have mistaken for datedly reinforcing them). For instance, I laughed out loud at the gag where Parratt seriously mulls over the option of leaving his fiance to get rid of Potter’s spirit but is violently outraged when it’s suggested he gives up golf instead.

‘The Christmas Party’ and ‘The Golfer’s Story’ were actually cut out of the American release. They aren’t the strongest stories in the film, perhaps, but I do think it would be missing something without them. They also play a part in the final nightmare sequence (or at least the Christmas Party does), so American viewers must have been puzzled by some of the elements of that. Dead of Night must also get credit for being one of the most influential anthology horror films of all time. It wasn’t the first but helped popularise the concept and was possibly the first British example. Its influence can be seen throughout the horror genre, most notably in a number of films and TV episodes inspired by ‘The Ventriloquist’s Dummy’, such as Magic (1978).

Overall, Dead of Night might not be as terrifying as it likely was back in the ‘40s, but it still has the power to chill in places and remains hugely entertaining regardless. Come for ‘The Ventriloquist’s Dummy’ but stay for the rest, you won’t regret it.

Dead of Night is out now on Blu-ray, DVD and Digital, released by Studiocanal as part of their Vintage Classics range. I watched the Blu-ray version and, whilst there are signs of wear, it generally looks fantastic – crisp and detailed, with a natural grain. With regards to the audio, it shows its age with the music sounding pretty rough in the opening sequence but one must respect the fact that the recording standard of orchestral music wasn’t very advanced back then. Elsewhere the audio can sound a little ‘hissy’ in places but it sounds good for its age.

It doesn’t look like much on paper, but the ‘Remembering Dead of Night’ piece is feature-length so offers a great deal of value and is preferable to a handful of shorter featurettes that might overlap in anecdotes and facts. It’s an excellent piece, allowing a handful of respected admirers of the film, such as John Landis and Kim Newman, to dig into what makes Dead of Night special.

The restoration comparison lets you see how good a job was done on bringing the film from its faded source to the attractive transfer you can now enjoy.

So, a fine disc for a fine film. Recommended.