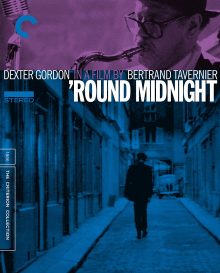 It’s interesting that Bertrand Tavernier’s ’Round Midnight, one of the most highly regarded films about jazz, came not out of America, the home of the musical genre/form, but from France (albeit with American backing and an American co-writer and star). It’s not that surprising perhaps, as the French have a history of championing and venerating American entertainment. The New Wave critics, for instance, had a great fondness for certain Hollywood genre directors and jazz artists often found a temporary home in Paris during the 50s and 60s.

Indeed, ’Round Midnight is loosely based on the latter days of jazz legends Lester Young (tenor sax) and Bud Powell (piano), the latter of whom had spent a few years in Paris before his death. The film’s narrative, whilst featuring a fictional lead character, is drawn directly from the memoir/biography ‘Dance of the Infidels’, which was written by Francis Paudras, who had befriended Powell during his time in Paris.

Being a big jazz fan myself, ’Round Midnight has been on my watchlist for a long time, so I was thrilled to hear Criterion would be releasing the film on Blu-ray in the UK. I got hold of a copy of the disc and my thoughts follow.

The Lester Young/Bud Powell composite of ’Round Midnight is called Dale Turner and is played by real-life jazz legend Dexter Gordon. The film begins with this aged influential figure in bebop now eking out an existence playing at a small Parisian jazz club for room and board. A known alcoholic, his ‘handlers’ at the club refuse to serve him drinks, so as to keep him sober and performing at a marketable standard. He’s not paid any cash either, to help stop him from buying his own booze elsewhere.

Illustrator and jazz fan Francis Borler (François Cluzet) comes across Dale playing in the bar one night and befriends him. Over time, as their friendship develops and Francis grows more disgusted at the way one of his idols is being treated, he puts Dale up in his own home, to live with him and his young daughter Berangere (Gabrielle Haker). This new dynamic, added to support and encouragement from Francis, help Dale find a new lease of life.

’Round Midnight is somewhat of a mood piece, not too concerned with plot. The basic story itself isn’t entirely original, with a fairly standard ‘comeback’ tale at its heart, on top of the fact the film is loosely based on a couple of real-life jazz artists. Instead of rushing through plot points then, the film takes its time in recreating the feel of Paris jazz clubs in the 50s and focusses on Dale’s character and journey. He’s a once-great artist getting old, feeling irrelevant and running out of steam, so much so that his art is the only thing barely keeping him alive.

Gordon does an incredible job in the role too, particularly when you consider he’d done very little acting before. It even landed him an Oscar nomination. It would be easy just to say he’s playing himself, but reportedly he was very different to Dale in person. It took me a short while to adjust to his unusual way of speaking and mannerisms, but he won me over as time went on with a nuanced, tender performance that anchors the film.

Some of the supporting cast can give the odd clunky line reading, perhaps partly due to the film’s French director dealing with largely English dialogue, but a more likely reason is that a lot of the other players are also jazz luminaries rather than actors. Whilst this might weaken the film from an acting perspective, it greatly improves it in other aspects.

You see, Tavernier made the bold but wise decision to have Gordon and his on-screen bandmates actually play and record all the diegetic music live on set. This gives the jazz scenes a striking authenticity, helping cement its reputation as one of the greatest of all jazz films. The musical performances, which make up a good portion of the film, are electrifying. Gordon was an old man at the time and past his prime, musically. He’d also had a lot of time off from performing, partly due to health issues, but this fits the role perfectly and his playing still has soul and character that comes across beautifully in what would be some of the very final recordings of the great artist.

Gordon and some of the rest of the musician cast members helped shape the dialogue to be more natural too, as the original script reportedly didn’t reflect how real New York jazz artists would talk. Gordon also supposedly suggested some scenes to be added, which Tavernier agreed with.

With its leisurely pace and heavy emphasis on the music, ’Round Midnight may not appeal to everyone but, for jazz fans like me, it’s a haunting, eloquent drama that beautifully depicts a lost soul kept afloat by his art.

’Round Midnight is out on 9th May on Blu-Ray in the UK, released by The Criterion Collection. The label retain their lofty reputation with a transfer that looks stunning. Tones are rich, textures are detailed and there’s no damage or artificial tampering to be seen. You also get two audio options (see below for details). I opted for the original stereo track, which came through beautifully.

The film comes with plenty of extra features too. These include:

All the extras here are valuable, though ‘Before Midnight’ is the real gem of the set. Running at 52 minutes, it’s quite an extensive behind the scenes piece, particularly for the time. It’s a fly-on-the-wall style documentary filled with marvellous footage of the cast and crew at work. It gives a great sense of being on set with everyone and shows how much work was put in to make the film as good as it is.

Gary Giddins’ interview is quite personal, as he was a good friend of Tavernier’s. He discusses their relationship and his thoughts on the film, including what he sees as its flaws. It’s a thoughtful piece.

The press conference is full of enjoyable and eye-opening anecdotes about the production, so adds something extra to the package.

Similarly, the conversation between Michael Cuscuna and Maxine Gordon is full of warm recollections of Dexter and insightful thoughts on the film itself.

The archive performance from 1969 is a wonderful addition too, providing a look at Gordon on full form in a nicely shot piece.

So, a strong selection of extras to complement a fine film. Warmly recommended.