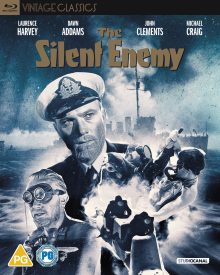 If you grew up on a diet of Hollywood war films (and studiously avoided history books) you might be forgiven for thinking that the Second World War only took place in Western Europe and the Far East. Yet even a slight delve into the cinema made outside of Hollywood’s purview would reveal a far greater scope to the conflict. The war films that Britain produced in the late Forties and throughout most of the Fifties are a perfect case in point, revealing characters, battles and stories beyond the limited scope of Normandy and The Pacific. Some of these have become established classics in their own right, including gems such as Ice Cold in Alex and The Dam Busters.

StudioCanal are adding two films this month to their underrated but essential Vintage Classics range that serve as perfect illustrations of the British Film Industry’s appetite for WW2 films during the 1950s. The one I am reviewing here is 1958’s The Silent Enemy, a stirring character study of the aptly named Lionel Crabb, the real life diver and bomb disposal expert who won a George Medal for his leadership in disarming bombs attached to British ships docked in Gibraltar during the war. Crabb is most famous today, however, not for his wartime achievements but for the mysterious circumstances surrounding his disappearance and supposed death in 1956. In April of that year,  Crabb was tasked to dive and investigate rumoured new propeller technology on the Russian warship Ordzhonikidze, which was docked in Portsmouth Harbour while on a diplomatic mission to Britain.  Yet after diving into the filthy waters surrounding the Ordzhonikidze, Crabb was never seen again; the circumstances and truth surrounding his death (most likely at the hands of the Russians who received a tip off) has never been fully established.

With Crabb’s disappearance making national headlines, it is not surprising a film based on his life was soon put into production. Yet, despite arguably being the more interesting story, it might not have been politically prudent to have made a film about the Ordzhonikidze affair only a few years after it occurred. Perhaps sensing this, screenwriter and director William Fairchild (adapting Marshall Pugh’s biography Commander Crabb) wisely skipped back a decade to make The Silent Enemy instead, focusing instead on Crabb’s heroic exploits in Gibraltar. Possibly in an attempt to honour the fallen Crabb, Fairchild takes certain historical liberties with his story (to say the least) conjuring up a rather fabricated but nonetheless stirring boys-own-adventure in the process. Set in 1941, the film begins with Crabb (played by a dashingly handsome Lawrence Harvey) arriving at the British Port of Gibraltar, which has been suffering looses at the hands of Italian Frogmen. These Frogmen, based across the water in neutral Spain, would take a submersible craft and use it to swim under the British ships docked at port, where they would surreptitiously attach bombs and mines to the ship’s hull under the water. The British had their own team of divers tasked with locating and disarming these bombs. Upon arrival, Crabb’s initial role is merely to help with disarmament but almost as soon as he has set foot on Gibraltar, the film finds him trying his hand at diving. Before long, Crabb, by using a mixture of anti-authoritarian guile and good old British charm, has galvanised the his dive crew (with a lot of help from Sid James) eventually leading them to take the fight right to the heart of the Italian operation…

Impressively shot on real locations, The Silent Enemy is skilfully handled by Fairchild, combining tense and thrilling action set pieces with moments of warm and amusing character development. The underwater sequences particularly stand out; one underwater skirmish that takes place late in the film at times feels like a prototype Thunderball, rippling with drama and violent action. While some of the sequences on land, full of stiff upper lip dialogue, dates the film, the sequences set under the seas of Gibraltar remain riveting and tense. This isn’t to suggest that The Silent Enemy only succeeds under the water. Lawrence Harvey, while delivering a performance that in both looks and attitude doesn’t really adhere to the real Crabb at all, proves to be a fantastic leading man. Strikingly handsome, bold and charismatic, he is the archetypal movie war hero, fearless, brave and loyal. He is effectively counterbalanced by Sid James, playing against type as a no nonsense diving instructor, an amusing foil for Harvey’s laissez faire attitude to rules and regulations. An obligatory love story is the only thing that drags the pace down occasionally.

In a refreshing twist on war movie tropes, The Silent Enemy also presents its audience with antagonists who are sketched with authenticity and humanity. The Italian Frogmen in the film aren’t  depicted as two-dimensional caricatures, as many Nazis were in the films made during this period. Instead, the Italians here are gentle, less fanatical foes, awarded with quiet respect and dignity, which certainly helps The Silent Enemy feel like a more mature, rounded work outside of the expected moments of stereotypical British derring do.

Impressively helmed, with great action set-pieces and striking underwater photography, The Silent Enemy is very much a film of its time, that sacrifices historical accuracy for a celebratory heroic narrative (let’s just say that the ending depicted in the film didn’t happen). If you let that go, however, you’ll find The Silent Enemy to be a resoundingly successful war film in the mould of a boys own adventure. It may not match British classics such as Ice Cold in Alex, but it certainly deserves to mentioned in the same conversation. For fans of British cinema or war films in general, this comes highly recommended.

The Silent Enemy is being released by StudioCanal on Blu Ray and DVD as part of their Vintage Classics range. The film has undergone a new restoration for this releases and the picture quality, like many other Vintage Classics, is wonderful throughout, full of great contrast and exceptional detail. There are a few moments of picture instability here and there, but I’m assuming that this was inherent in the source. The mono soundtrack is likewise exceptionally clean and detailed. Overall, a fantastic presentation.

There are only a few extras on the disc. The most substantial is a video interview with Crabb biographer and author Tim Binding. This offers an interesting look at Crabb’s real life, revealing what The Silent Enemy got right and the liberties it took in order to make a more crowd pleasing, action packed film. Binding also goes into lots of detail about Crabb’s subsequent disappearance and the mystery surrounding it.

The disc also contains a brief, 3 minute Pathé news reel film from around the time of Crabb’s disappearance, along with a brief photo gallery of behind the scenes stills.