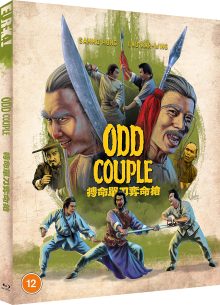 In 1978, the friends and rapidly developing Hong Kong cinema legends Karl Maka, Lau Kar-wing and Sammo Hung formed their own production company, Gar Bo Films. Sammo was still contracted to Golden Harvest at the time, but he had enough sway to be allowed to work on other projects. Gar Bo was still a subsidiary of that company too, so he wasn’t travelling far from his roost.

Gar Bo only produced two films before Maka left to form the hugely influential Cinema City, alongside fellow actors Raymond Wong and Dean Shek. However, the pair of titles, Dirty Tiger, Crazy Frog (which is currently difficult to get hold of in the UK but well worth tracking down) and Odd Couple, are both fondly remembered by kung-fu fans and the experience led Sammo onto forming the Bo Ho Film Company, which proved much more long-running and successful. Golden Harvest still tagged along too, distributing the titles Sammo produced through Bo Ho.

Eureka, like myself, are big fans of Sammo Hung and have been regularly dipping into his back catalogue for their popular kung-fu Blu-ray releases. The next one up is one of the Gar Bo titles, Odd Couple (a.k.a. Bo ming dan dao duo ming qiang which translates to ‘Fight For Your Life’), which was released in 1979, directed by Lau Kar-wing and starred both Lau and Sammo.

The pair both take on dual roles in fact. You see, initially, they appear playing two weapons experts, the Sword Master (Sammo) and Spear Master (Lau). These ageing but still very competitive gents meet every year to fight and see who is the ultimate weapons master. However, each time their duel ends up a draw, as they know each other’s moves so well. So, the two weapons masters agree to take on a new student each and train them up to fight in their place.

This is where the dual roles come into play, as the Spear Master takes on the country bumpkin Ah Yo, who’s played by Sammo, and the Sword Master takes on the stubborn and vengeful Wing, played by Lau. Having each actor take the other on as a pupil helps avoid complex doubling and split-screen effects, as the training, of course, takes place away from the other Master’s watchful eye.

Whilst the four men prepare for their annual duel, the villainous Scarface (Kar Yan Leung) enters the scene and is hellbent on revenge. You see, the marks that make his name (though one is actually on his hand) were caused by the two weapons masters.

So, the annual duel might have to be put on hold as the quartet are forced to work together to defeat a common enemy.

Like a lot of Eureka’s crop of Golden Harvest connected kung-fu releases, Odd Couple is a personal old favourite from my days of collecting DVDs from the now-defunct Hong Kong Legends label.

In a classical film analysis sense, it’s not one of the best of Sammo’s work from the era. Chiefly, the story is largely just a flimsy excuse to indulge the whims of its two stars. Both had nicely contrasting skills with different weapons and wanted to put them to good use on screen, so came up with the concept for the film. The idea of playing the dual roles, however, reportedly came from the fact they were struggling to find comparable performers who were available, until a friend suggested they just play both the young and old characters themselves.

I didn’t find the jokes quite as laugh-out-loud funny as in some of Sammo’s other comedies either. There’s an awful lot of mugging and not many finely crafted gags. Dean Shek, playing the bizarre Master Rocking is an exception to this though. He was encouraged to create his own character and really goes to town with it. He comes out of nowhere and doesn’t have a great bearing on the plot but is great fun to watch, with his wild movements and funky accompanying theme music (that only plays when he does his crazy walk). The final gag with the eggs is a bit gross though.

Any ropey elements of the film can be easily excused, however, as Odd Couple delivers where it truly counts in a kung-fu film, in the action. The fights here are absolutely breathtaking. I’ve always had a real soft spot for weapon-based combat in films and Sammo and Lau Kar-wing deliver some of the finest ever put to screen. They shared choreography duties, leading to a varied mix of brawls. Their talent truly shows, with some stunningly elaborate, fast-paced and thrillingly acrobatic sequences. There are a lot of them too, with very little downtime in between fights.

Much of the humour comes through the choreography too, with a wonderful sequence where our heroes’ opponents turn out to be trained in Peking Opera (much like Sammo himself) so their fight plays out like a stage performance, complete with traditional Peking Opera music.

There’s also an opening martial arts demonstration that works as a light spoof of that style of kung-fu movie intro, favoured among Shaw Brothers titles in particular. Despite the comedy, coming largely through Sammo pulling some slightly silly faces and poses, the sequence still delivers an impressive display of weapon skills by the two stars.

The film’s villain, Leung Kar-yan, did not come from a martial arts background like Sammo and Lau Kar-wing but he does a great job of hiding it in his eye-popping fight scenes.

The cast has strong chemistry, in general. Most of them were good friends and had worked together for a long time, and it shows on screen. There are various supporting cast members and cameo appearances that martial arts movies fans will recognise too, like Karl Maka, Lam Ching-ying and Mars.

Overall then, it may be slight in plot and the humour not quite as effective as in some other classic kung-fu comedies, but the action here is phenomenal. I’ve always been partial to weapons combat, so I may be biased, but the fights blow me away every time I see the film, keeping it sat among my favourites of the genre.

Odd Couple is out on 21st March on Blu-Ray in the UK, released by Eureka as part of their Eureka Classics series. The picture quality is excellent, looking clean and crisp, with pleasing colours. You get a choice of audio tracks, as usual. I watched with the Cantonese track and it sounded sturdy enough. You can never expect demo-quality audio from these vintage kung-fu movies, but I didn’t detect any damage or other issues.

The double bill of a Frank Djeng and Bobby Samuels commentary and a Mike Leeder and Arne Venema track is becoming the standard for kung fu classics on Blu-ray in the UK. You could say it’s just more of the same and I wouldn’t necessarily argue with that but, to me, it’s like sitting and rewatching an old favourite with your mates. Both pairs have a nice rapport and a great knowledge of the film and industry as a whole. They know everyone involved in the production and point out every interesting cameo as well as explaining any cultural jokes or details that might be lost on most Western audience members. I don’t know how they keep up with all the releases they appear on but long may it continue!

Bryan “Beardy” Leung Kar-yan discusses how he got started in the industry in his interview, talking fondly of Chang Cheh and Sammo Hung, in particular, who both helped him progress in his career. He also gives his thoughts on the films he’s made and the Hong Kong kung-fu film industry as a whole. It’s a decent piece.

Lau Kar-Wing talks about his family history in martial arts (his father’s mentor’s mentor was the great Wong Fei Hung), as well as how he got started in the industry and such. He discusses the introduction of choreographers into Hong Kong action films too, which is interesting to hear. Like the other interview, it’s from the old Hong Kong Legends DVD, so isn’t new, but it would be missed if it were left off.

As usual, you get one of Eureka’s booklets included too. The essay featured in this isn’t particularly lengthy, but it’s an interesting piece that looks at the creation of the Gar Bo company and gives a brief look at the film itself. There are plenty of behind the scenes and publicity images filling out the rest of the booklet, which are fun to see.

So, Eureka once again do a fine job with a martial arts classic and there are more soon to follow, with a pair of Yuen Biao titles coming our way in April.