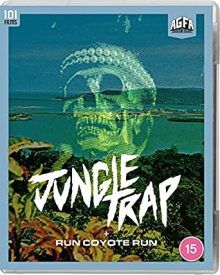 Director James Bryan has over the decades quietly built up a bizarrely eclectic filmography ranging from the relatively well-known ‘video nasty’, Don’t go in the woods, through various action films (e.g. Hell Riders) through to adult fare with a lot of odd tangents in between; e.g Sex Aliens. After helping actress/writer Renee Harmon on her Lady Streetfighter project the two subsequently collaborated on a number of occasions and this release celebrates two such collaborations, since we’re also treated to (?) a second film on the disc, (labelled as an extra), namely Run Coyote Run.

Essentially Jungle Trap has a flimsy plot whereby a group of academics from a museum (mostly likely shot in one of the producer’s houses) are tasked with locating a missing idol from part of a jungle occupied by the fierce Mali tribe, who are head-hunters and are very protective of their land and belongings. When they finally reach the ruins of the Palace Hotel set within said jungle it quickly becomes apparent that the abandoned building (which looks more like someone’s garage) hosts more than just dust and over-grown jungle foliage, in the shape of the Mali victim’s ghosts and much worse besides. 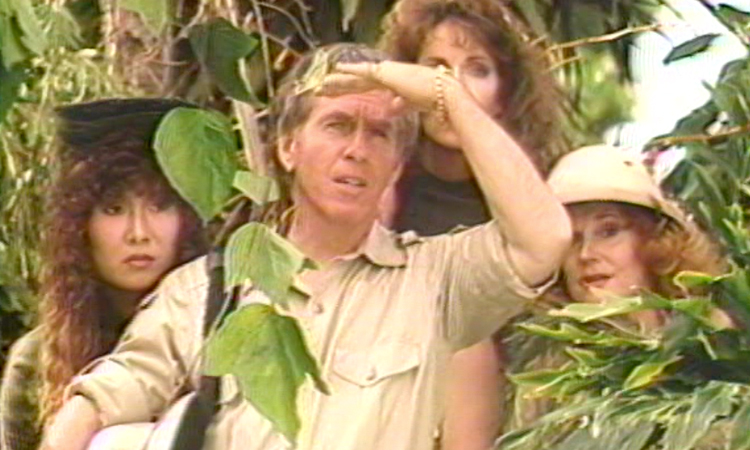 The dynamics between anthropologist Josh Carpenter (Frank Neuhaus, Hell Riders) and his estranged journalist wife, Chris (Renee Harmon, Frozen Scream) is an interesting one since they spend much of the film’s running time bickering over who is to lead the return expedition and also about Josh’s new relationship with the much younger Betsy (Heidi Ahn); one of his students. The other characters aren’t so well fleshed out, and, quite frankly, due to the appalling acting and writing on display here, the viewer doesn’t really care.

Jungle Trap isn’t a movie that will appeal to the general public, what with its stilted acting, cheap-looking camcorder visuals, gonzo plotting, and general incoherencies. Of course, for trash movie affectionardos that’s all part of the charm of it, or it can be. I, for one, quite liked the randomly placed stock footage; it just adds to the fun for a Z-grade movie. However, the combative performances become a bit irritating after a while and the overall atmosphere of incoherence becomes more annoying than endearing after a while. 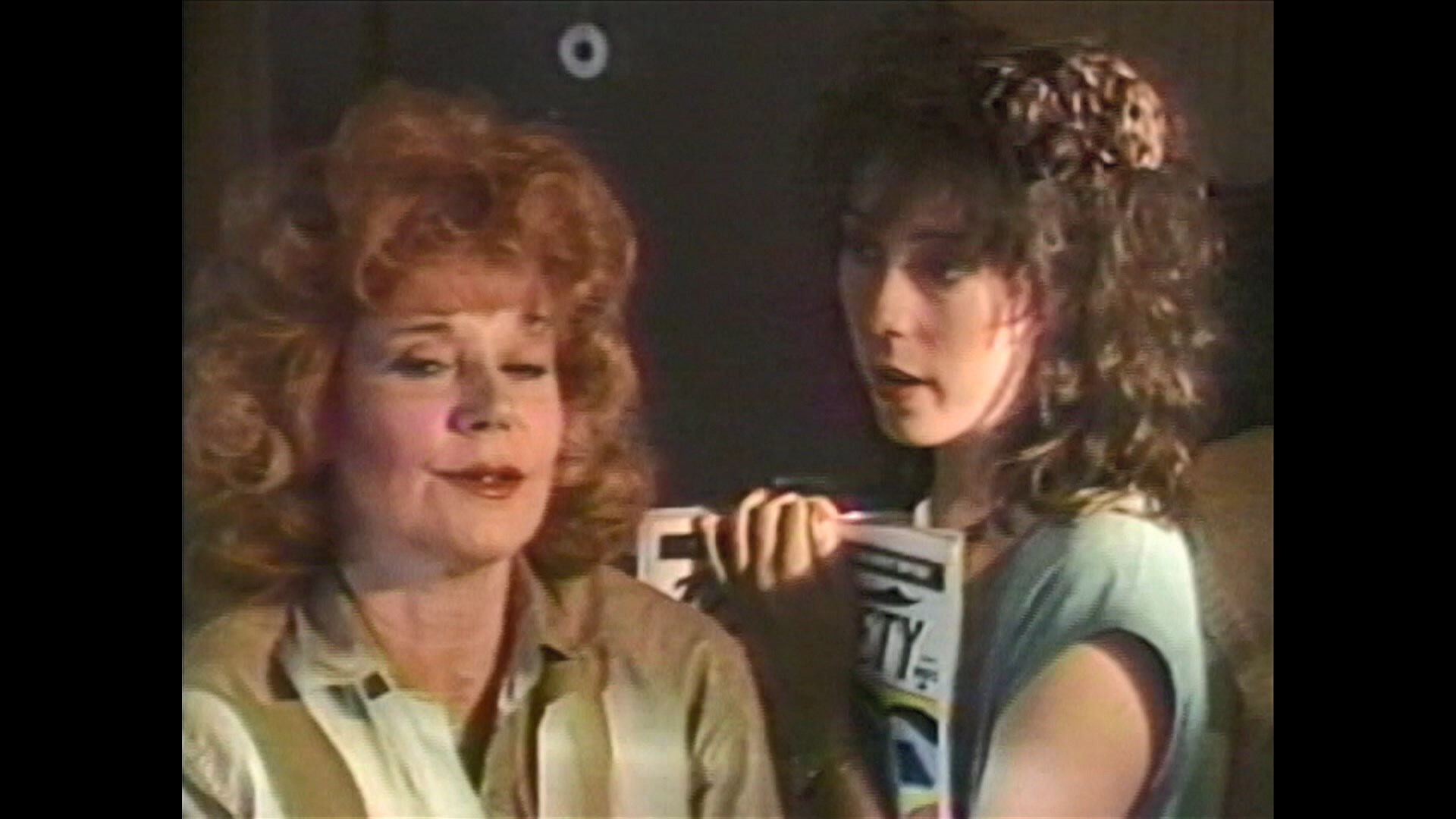 On the positive side there’s plenty of humour within the film, much of it unintentional, a hummable electronic score by Taken by Savages (aka Annie Choi and Joseph A. Ziemba), and some enjoyably naff special effects.

Shot in 1990, but remaining unfinished until 2016, when it was randomly rediscovered through the efforts of Bleeding Skull and the American Genre Film Archive (AGFA), Jungle Trap is a cross between a low budget Hollywood jungle picture from the 1940s and The Shining with its haunted hotel setting.

The execution feels more amateur (if that’s possible!) than director James Bryan and writer/producer Renee Harmon’s other films because of the camcorder photography, but the film still retains a kind of ‘special needs’ charm all of its own, despite its many flaws. 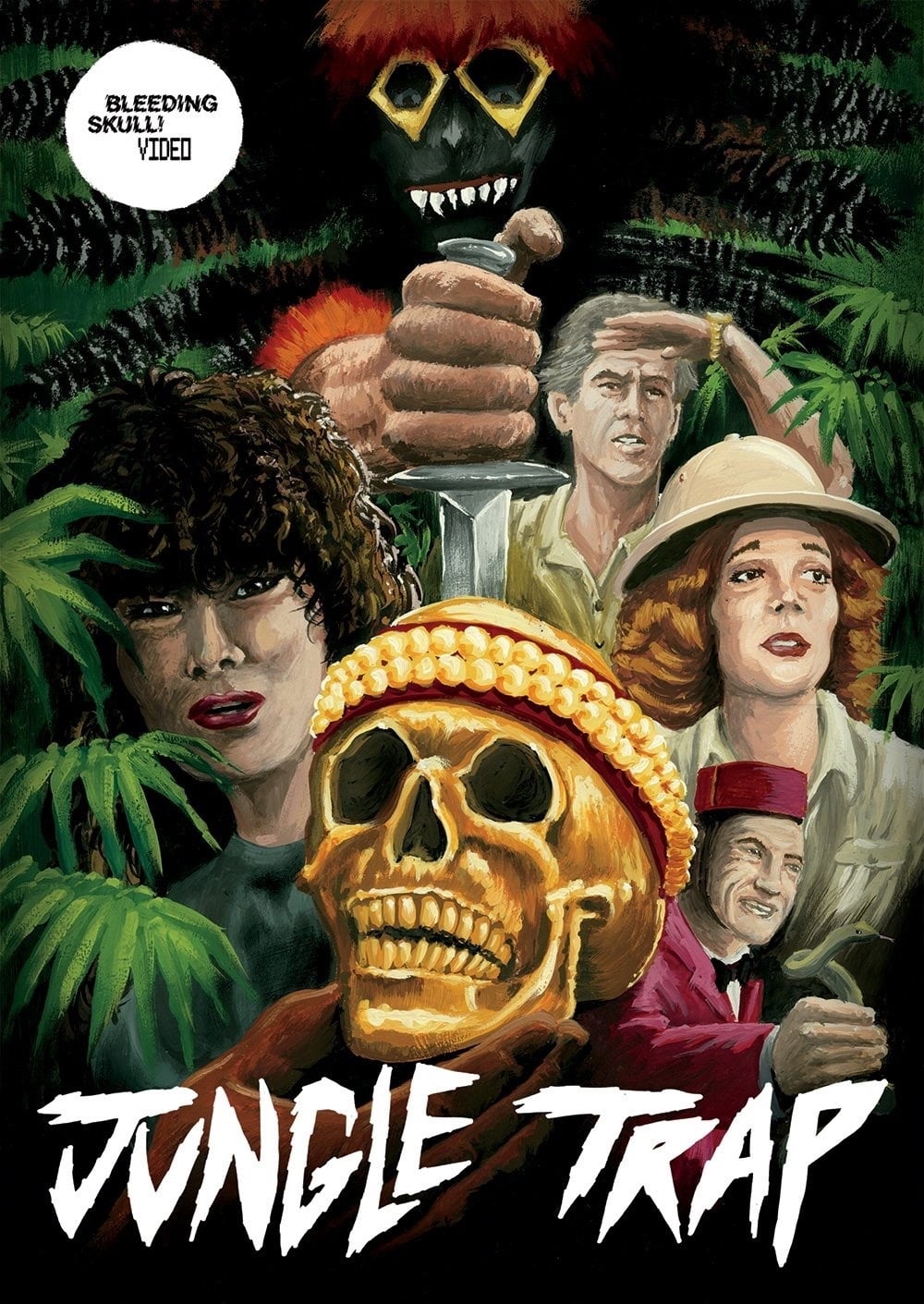 The disc’s bonus-feature, Run Coyote Run, is Bryan’s and Harmon’s sequel to their earlier action film Lady Street Fighter (1981). Shot in 1987, Run was no more successful in finding a distributor than Bryan’s other sequel Revenge of Lady Street Fighter (1990), both of which mixed a significant amount of footage from the first film and reused it to mixed effect in a hybrid form for the follow-ups.

Run Coyote Run casts Harmon, herself, as her street fighter character’s twin sister, Ann Welmington, who’s an Interpol agent; one who keeps getting strange psychic visions of her photojournalist sister’s murder, even though her psychiatrist brother-in-law, Mark (Bill Whitmire), insists that Linda died accidentally in a fire. The police commissioner (Bill Luce, who played a very funny drunken pilot in Jungle Trap) allows Ann to retrace her sister’s footsteps in the thin hope that she’ll be able to identify mob gun runners. The trail leads her to various dodgy characters including a priest, a waitress and a drug pusher, who are all bumped-off before they can tell her anything of use. Meanwhile, inept hit-man Josh (Timothy de Haas) makes use of additional hired muscle, in the form of religious biker ‘Father’ (Frank Neuhaus), to rub Ann out before she discovers a tape that can expose the entire criminal network.

Not that I really got any of that from watching the film, which is about as clear in its plotting as primordial soup. Not helping in telling the story is the confusing placement of mismatched footage, although viewers steeped in the works of James Bryan and Renee Harmon will recognize not only footage from the Street Fighter film, but also excerpts from Hell Riders and ex-nasty, Frozen Scream.

Actually Run Coyote Run starts out quite strongly with some nicely realised shots of Harmon moving, gun in hand, through a Spanish-styled villa, and there’s even a shoot-out to liven things up. If only the rest of the film had kept up with that level of drama and action, it might not have ended up being such a turkey. However, once again, there’s enough unintentional humour in the film to at least entertain the viewer, especially during the hilariously bad ‘hypnotism scene’, where it’s clear that Harmon hasn’t a clue how hypnotism really works.

More eventful than Jungle Trap, Run Coyote Run is still appallingly bad, but, yet again, is still plenty of fun especially if you’re in the right kind of mood to watch trash movies. 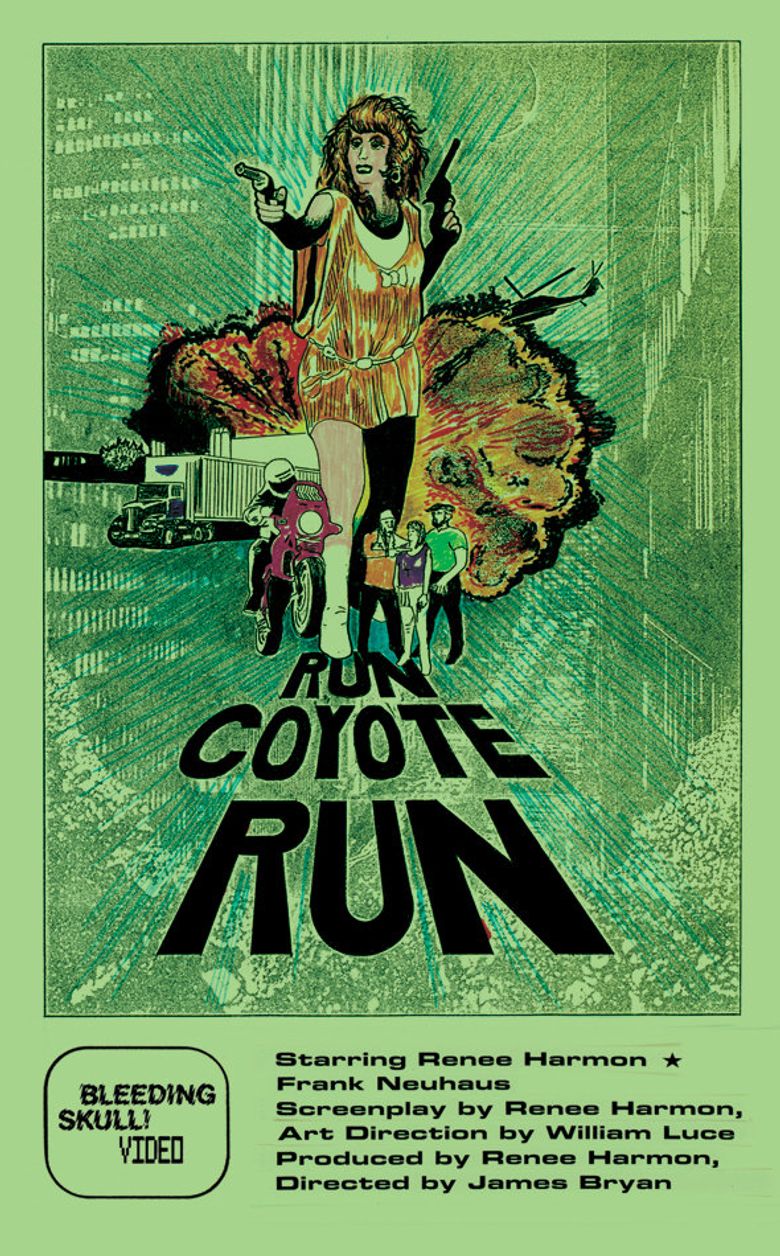 Jungle Trap/ Run Coyote Run is being distributed by 101 Films and AGFA on Blu-ray. There are plenty of extras on the disc including:

Audio commentary on Jungle Trap with director James Bryan and actress Heidi Ahn, moderated by Bleeding Skull’s Zack Carlson, Annie Choi, and Joseph Ziemba. The group talk about how Renee actually taught acting (really?) and how the project first came to life when the film was found in a bag in the boot of a car.

It wasn’t my fault – the making of Jungle Trap (11.5 mins) – Director James Bryan talks about his career, how he got involved with the projects and with Renee, and he shows us round his lock-up, unearthing various bits and pieces of movie memorabilia as he goes.

Jungle Trap outtakes (2.5 mins) – We get five additional scenes, but only one should have been left in, i.e. where Joe gives Betsey the compact as a gift.

Horror Con (28 mins) – Footage from James Bryan’s unfinished ‘slasher’ film set during a horror convention. I have to admit that I’ve never seen sword fighting demos at any of the horror festivals that I’ve been to! Sadly, this is all silent footage. 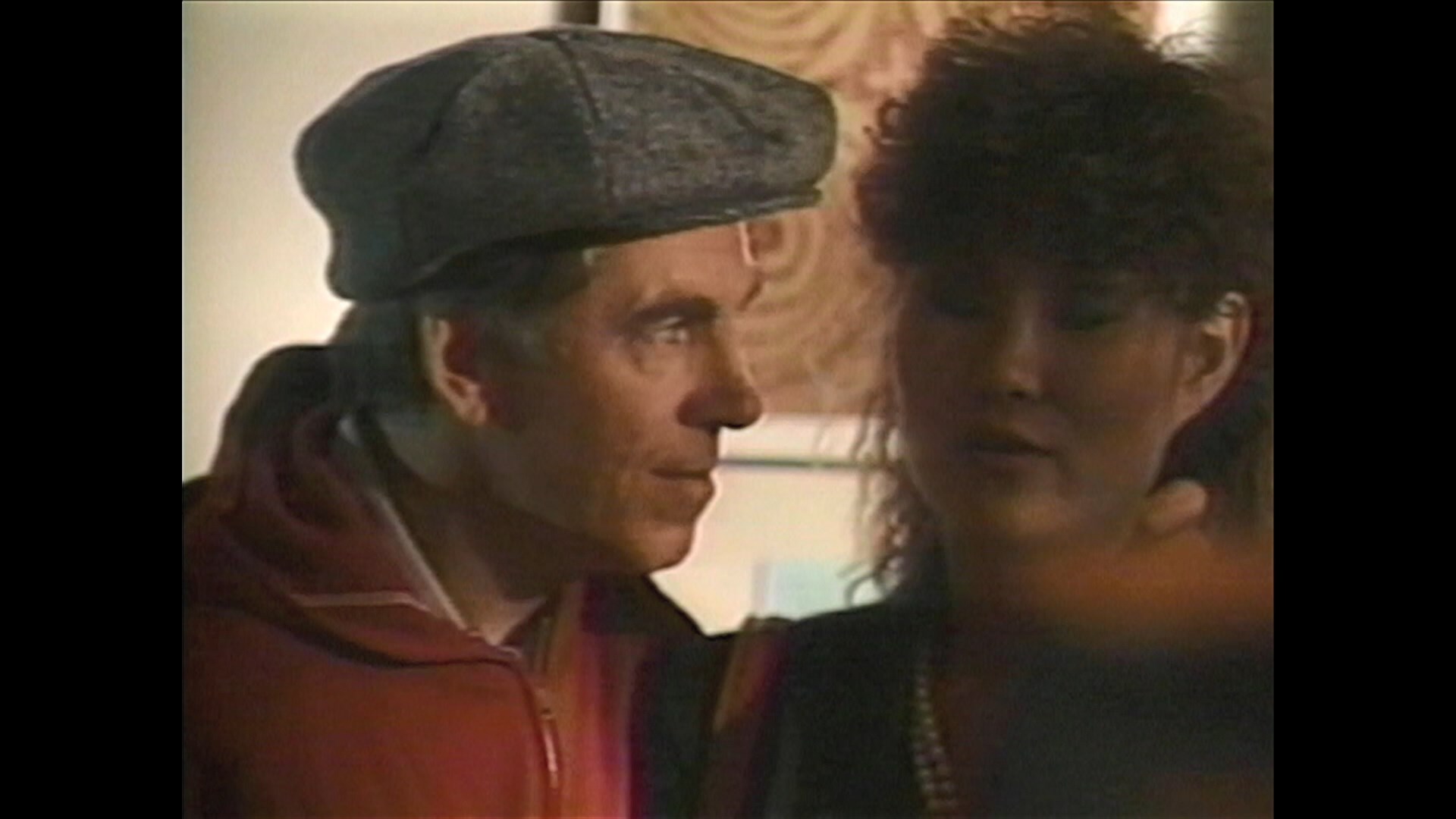