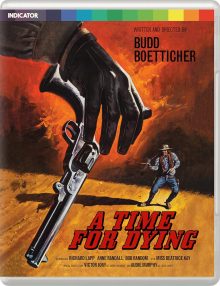 Audie Murphy was the most decorated officer of WWII (in the US, at least), leading to him becoming a national celebrity and eventual movie star. This sudden attention brought on the young man, after a gruelling time in the war, was too much to handle though and, behind the heroic facade, Murphy struggled with what would later likely be diagnosed as PTSD. He became addicted to sleeping pills and got into serious financial troubles due largely to a gambling problem.

As these problems escalated, his fame dwindled, with audiences less interested in the kind of westerns and war movies he was known for.

At the end of the sixties, Murphy decided to produce his first film, in order to make some money to pay off huge gambling debts to the Las Vegas mafia. This film became A Time For Dying. It was written and directed by Budd Boetticher, who reportedly took on the job as a favour for Murphy, who had helped him out when he hit rock bottom a few years prior.

The film was a disaster though. Boetticher once claimed it was “never meant to be released”, suggesting it was a tax write-off, in a similar vein to ‘Springtime For Hitler’ in The Producers. Reinforcing this claim is the fact that, after it was screened in 1969 in Texas, it wasn’t released nationwide or even copyrighted until 1982.

Coming out so far after it was made, receiving less-than-stellar reviews and not fitting at all into the trends of the time, meant the film fizzled out into obscurity. 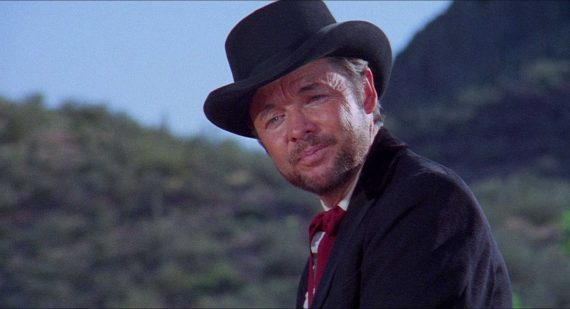 Sadly, this disastrous production was Audie Murphy’s final film, as he would die not long afterwards, in a plane crash in 1971. It was also Boetticher’s last fiction film. He made only two documentaries afterwards (one of which was actually shot before A Time For Dying), finding it difficult to get anything off the ground in later years and eventually retiring. He died in 2001, at the age of 85.

Whilst never widely respected, A Time For Dying has found supporters over the years, with some critics and filmmakers claiming it’s a misunderstood classic of the western genre. Filmmaker and novelist Christopher Petit even went so far as to put it in his top 10 best films of all time list for one of the prestigious Sight and Sound polls.

Known to often support such interesting and divisive titles, Indicator have selected A Time For Dying for inclusion in their fine range of boutique Blu-ray releases. Being a big western fan myself and having thoroughly enjoyed their previous Boetticher collection a few years ago (https://blueprintreview.co.uk/2018/05/five-tall-tales-budd-boetticher-randolph-scott-at-columbia-1957-1960/), I strapped on my pistol (or maybe notepad and pen) and bravely ventured forth.

A Time For Dying opens with young farm boy Cass Bunning (Richard Lapp) riding into Silver City, in search of fame and fortune as a gunslinger. There, however, he finds a town full of drunks letching over a young woman, Nellie Winters (Anne Randall), who arrives in town unaware she’s being brought there as a new prostitute for the local brothel. 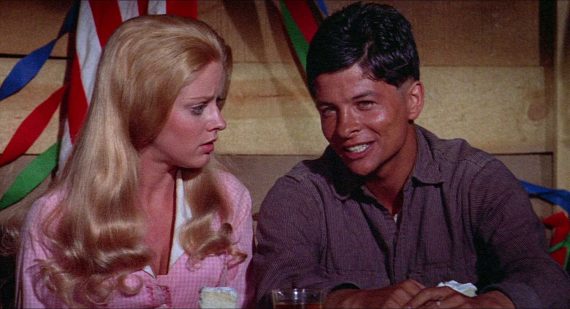 Cass saves her from this fate, riding off with Nellie into the night. The pair end up in a neighbouring town where Cass is tricked into being caught in Nellie’s bedroom that evening, an offence in those days. The town’s presiding judge, the infamous Roy Bean (Victor Jory), forces the pair to get married and they wander on, forging a relationship and getting to know each other better along the way.

With Cass’ insistence on following a life of gunslinging though, a dark cloud looms over their time together.

It’s not hard to see why A Time For Dying isn’t as well-regarded as Boetticher’s more famous work, particularly the films he made with Randolph Scott. Tonally, the film is all over the place, lurching from broad comedy to nihilistic violence and everything in between. The music doesn’t seem to know what sort of film it’s made for either, having the sound of a classic, rousing 50s western, rather than the curious, small-scale, semi-revisionist western it actually is.

A Time For Dying is a decidedly cruel and cynical film overall though, despite the moments of levity. The finale, in particular, delivers a dual gut-punch that will help the film linger in your memory.

Whilst this conclusion of Cass’ character arc is somewhat inevitable, it does seem to come out of nowhere in the film though, with a sudden shift in tone just when you think everything’s done and dusted. It’s jarring, to say the least, but undeniably powerful as it plays out. 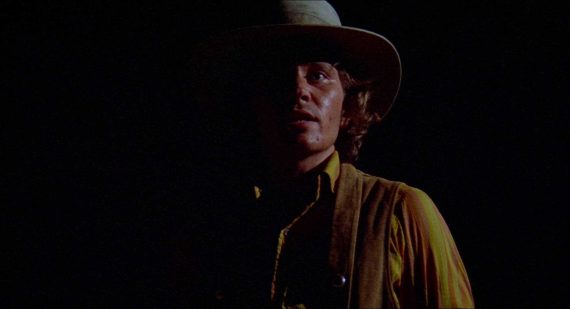 Nellie’s story is very dark too, with her unknowingly entering town to be a prostitute, but it’s initially played like a comedy with the high-jinx of the people in town, which is most unsettling.

The performances are also uneven, being largely either broad or bland. Most of the supporting cast fit the former, whilst Lapp fits the latter. He’s not much of a leading man, though his wide-eyed naivety and awkwardness fit the character perfectly as we learn more about him. Randall delivers a more conventionally strong performance, though it’s hardly award-worthy.

There are a few strong performances in the film though. Chewing the scenery as Judge Roy Bean is Victor Jory. He plays things astoundingly large but it works a treat. His scenes are a pleasure to watch, as he portrays the legendary Judge in a wildly grotesque fashion, sentencing people to death with devilish glee and regularly fiddling with his false teeth, which he keeps in a jar of old whiskey. 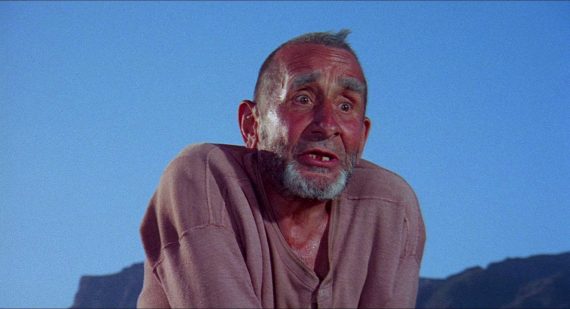 Also impressive is Robert Random as Cass’ villainous counterpart, Billy Pimple. It’s a fairly showy performance again, with various nervous twitches and such, but it has more subtlety than Jory’s scene-stealing role.

Murphy is very good too. He’s only in the film for a few minutes, but makes a big impact, showing up as the folk hero Jesse James. Playing the character as an honourable, wise sage to Cass, it goes against true accounts of James as a vicious killer, but fits the legend Hollywood had cashed in on many times over the years.

Like some of the performances, the film plays things quite large in general, with activity in the two towns regularly descending into chaos, whether it be due to a new prostitute arriving, a trial, a potential gunfight or just a proliferation of alcohol. This matches the cynical tone of the film, showing the men of the ‘wild west’ as a bunch of children in arrested development, in desperate need of law and order. The final showdown is stark, controlled and minimally lit though, helping it stand out against the madness surrounding it. This highlights the serious nature of life and death that is usually treated so frivolously by those buying into the traditional myth of the west.

So, A Time For Dying is an oddity, for sure. It’s easy to criticise but somehow I found myself drawn to it and not in a train-wreck sense of the phrase. Though not everything works and it all feels a little messy, its anti-western ideas are compelling and it’s an enjoyable, albeit peculiar ride.

A Time For Dying is out on 21st March on Blu-Ray in the UK, released by Indicator. The picture quality seems a little shaky in the first scene (following the credits), with some slightly problematic heavy grain. However, this dies down come the next scene and overall it’s an impressive transfer, with strong colours and sharp details. Grain is thick throughout but it looks natural outside of that rough first scene. The audio is a bit rough around the edges, but this is more than likely down to the state of the original recordings. 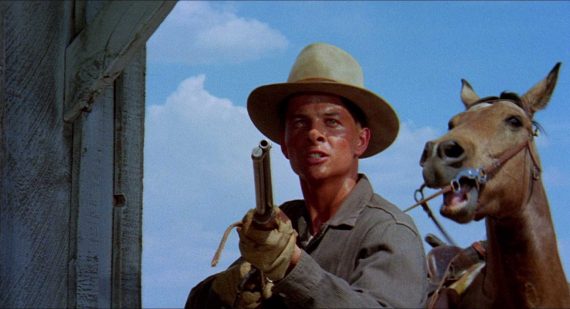 There is a handful of special features included in the Limited Edition package too:

– New restoration from a 2K scan of the original negative by Powerhouse Films
– Two presentations of the film: in its original 1.85:1 theatrical aspect ratio; and 1.37:1 open matte shooting ratio
– Original mono audio
– Audio commentary with screenwriter and novelist C Courtney Joyner and film historian Henry Parke (2022)
– A Sense of Poetry (2022, 14 mins): filmmaker and novelist Christopher Petit discusses his fascination with A Time for Dying and his reasons for selecting it for the Sight & Sound Greatest Films of All Time poll
– The Men Who Shot Jesse James (2022, 20 mins): Kim Newman, critic and author of Wild West Movies, explores the many film portrayals of the infamous outlaw
– New and improved subtitles for the deaf and hard of hearing
– Limited edition exclusive 36-page booklet with a new essay by Paul Duane, archival interviews with director Budd Boetticher and actor Audie Murphy, and film credits
– World premiere on Blu-ray
– Limited edition of 4,000 copies for the UK and US

C Courtney Joyner and Henry Parke provide an informative and engaging commentary. They have a lot of love for the film but still honestly address problems people have with it.

In his interview, Kim Newman begins by giving an illuminating potted history of the real-life Jesse James before looking at the various films that have depicted the character. It’s a great piece, delivered with his usual chirpy enthusiasm.

I loved ​​Christopher Petit’s interview. He discusses why he thinks the film is great, despite it being what many would consider a ‘bad movie’. He picked it for his Sight and Sound top 10, largely to go against picking from the usual canon of titles but also because he thinks it’s much better than what it seems on the surface.

Indicator’s booklets are the best in the business and this one is particularly good. There’s an interesting coverall piece on the film itself, then illuminating interviews with Boetticher and Murphy. The latter gets a pair of fascinatingly varied pieces – one where he’s pretty chipper and confident about the film’s success and another where he’s speaking honestly about his financial issues and PTSD (though not calling it as such).

So, another strong release from Indicator. It may not be quite as stacked as some of their discs, but everything included is of great value, so it comes easily recommended.