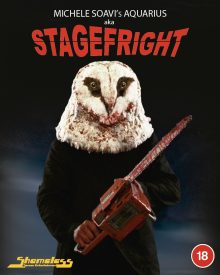 Michele Soavi first entered the film industry as an actor but soon became an assistant director and attracted the attention of Dario Argento, who gave him work on a couple of his productions. In an interview included on this disc, Soavi claims working as Argento’s assistant director was an ambition of his, but he soon moved even further, when Aristide Massaccesi (a.k.a. Joe D’Amato) offered him the chance to direct his first feature film.

The title in question was the horror movie Stagefright (a.k.a. Deliria or Aquarius). It was only a low-budget affair (the equivalent of under $1 million U.S.) and performed poorly in its native Italy but was quite successful elsewhere. This helped lead Soavi on to another trio of horror movies, The Church, The Sect and Dellamorte Dellamore, all of which, alongside Stagefright, have become cult classics among genre fans. The director moved primarily into TV after that and didn’t produce anything as notable as those first 4 titles. However, they were enough to cement his name as one of the great Italian horror directors.

I’m a relative latecomer to horror movies in general so there are far too many gaps in my knowledge of the genre. I watched Dellamorte Dellamore recently though and loved it, so when I heard Stagefright was being released on Blu-ray in the UK by Shameless, I jumped at the chance of reviewing it. 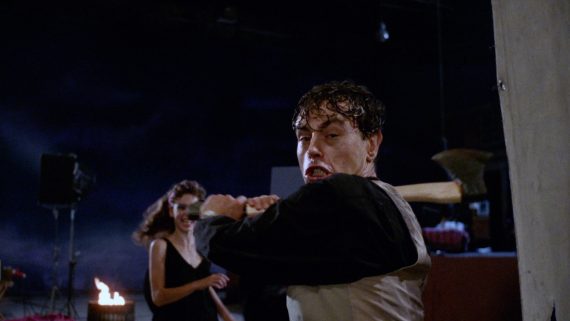 Stagefright sees a group of actors and actresses rehearsing a strange slasher dance-musical in an out-of-town theatre. Peter (David Brandon), the director, is a harsh taskmaster, giving the cast grief and not allowing them much of a break.

One of the actresses, Alicia (Barbara Cupisti), manages to sneak out to a nearby hospital with costume designer Betty (Ulrike Schwerk) though, to get her twisted ankle checked out. It ends up being a psychiatric hospital, but they get help anyway. Unfortunately, a murderous patient named Irving Wallace (Clain Parker) escapes, hides in the car with them and later kills Betty.

The cold-hearted Peter believes the incident could be a huge boost to his play’s box office, so, rather than shutting down or halting production, he locks the principal cast in that night for extra rehearsals, with a plan to open the show earlier than intended, to capitalise on the publicity the murder will give them.

Little does he know, however, that the killer is also locked in the theatre with him and the rest of the team… 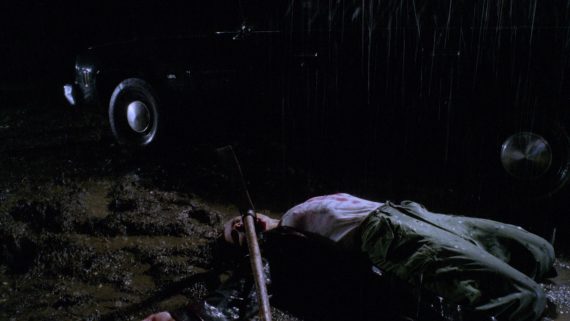 As the synopsis alludes, Stagefright is pretty much a bog-standard slasher movie on the surface. A group of attractive young people are dispatched, one by one, in a variety of bloody ways by a masked killer (Wallace wears the owl costume designed for the play’s killer character). As such, it suffers from a lot of the usual plot contrivances and daft decisions made by characters inherent to the genre.

However, Soavi takes the low-rent material (slasher movies were largely relegated to straight-to-video by 1987) and turns it into something relatively special. Most notably, he and cinematographer Renato Tafuri add a great sense of style to proceedings. Soavi’s experience in working with Argento and Lamberto Bava clearly rubbed off as the film has a slick, stylized, giallo look, with a strong use of colour similar to their work. 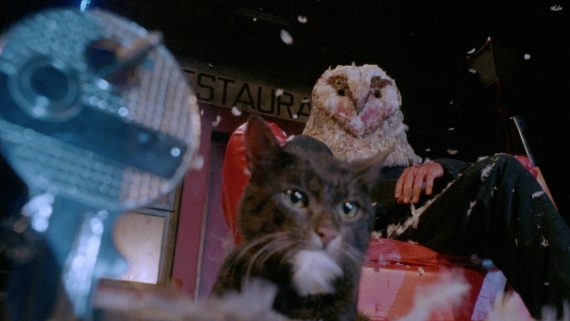 A couple of the kills are enjoyably staged and suitably gory, though it’s not one of the most impressive slashers in this respect. It was actually a quieter moment, where the killer sets the stage out with the bodies of his victims, that I found most creepy and effectively tense.

There are a few little nice touches that come from the setting too and the idea of playing with what’s real and what isn’t. For instance, there’s a moment where somebody’s real blood splashes into a pool of fake blood and a strong scene where the director is inadvertently ordering the killer to kill one of the actresses.

The cast are a bit hit and miss. Brandon is the strongest, managing to eventually create some sympathy for a character who’s initially pretty despicable. Cupisti, who was dating Soavi a the time, is less impactful but holds her own, making for an effective heroine. Mickey Knox is amusing at times as a cop whose improvised goofing around in a police car uselessly waiting outside the theatre is used to break up the tension between murders. Elsewhere, the acting veers between hammy and wooden. Giovanni Lombardo Radice’s over-the-top portrayal of a stereotypically camp homosexual actor could be seen as insensitive too.

So, whilst as a directorial debut it’s quite impressive, Stagefright is ultimately a little too derivative to be considered among the best of the genre. It’s still a lot of fun though and genre fans will lap it up. 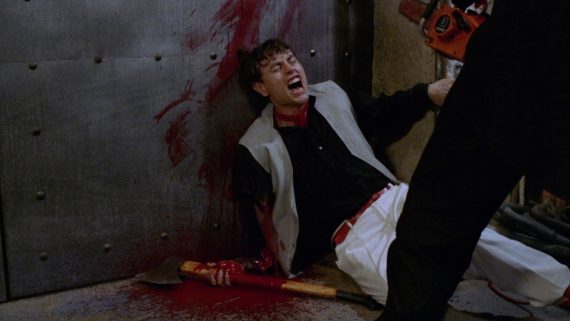 Stagefright is out on 27th December on Blu-ray and digital on-demand, released by Shameless. I saw the Blu-ray version and it looks fantastic. The picture is sharp, with a subtle, natural grain and pleasing colours. You get a choice of either English or Italian tracks for audio. I watched with the English track and found the balance between dialogue and music a bit extreme, but that’s a common trait on a lot of discs.

Michele Soavi’s interview is a decent length (45 mins) so covers quite a lot of ground, starting from how the project came about and going through production and post-production. It’s a strong piece.

Giovanni Lombardo Radice is almost as flamboyant as his character. He spends a little too long describing how close he was with the director perhaps but it’s still a fun interview. One thing he describes is how horrible the location was.

The David Brandon interview is a bit low energy and a little too much time is spent answering the tiresome question of “what was it like to work with…” But he does have a few nice anecdotes and behind the scenes tidbits to regale us with.

It’s a decent release then, of a solid slasher. Well worth a look.