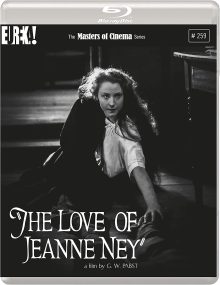 Austrian-born Georg Wilhelm Pabst was one of the key directors of Weimar Republic era Germany. He’s maybe not as well known and loved as some other German directors from the time, namely Murnau and Lang, but he made a number of highly regarded films during the late silent and early sound period. Pandora’s Box and Diary of a Lost Girl are among his most famous titles but I, unfortunately, haven’t had the chance to watch them yet. I have, however, seen his early ‘talkies’ Westfront 1918 and Kameradschaft, both of which I thought were superb.

So, when Eureka announced they’d be releasing Pabst’s 1927 silent classic, The Love of Jeanne Ney (a.k.a. Die Liebe der Jeanne Ney or Lusts of the Flesh), I requested a copy to see how it matched up against those later films. My thoughts follow.

The Love of Jeanne Ney begins in Russia during the civil war. Jeanne (Édith Jéhanne) is living there with her father, André Ney (Eugen Jensen). Nearby, the scheming Khalibiev (Fritz Rasp) needs some drinking money, so sells a list of Bolshevik agents to André. This lands the French diplomat in hot water when his servant informs the Bolsheviks that his employer has the list. A group of agents, including Jeanne’s lover, Andreas Labov (Uno Henning), demand André hand over the list to clear their names, but when he refuses and shoots at them, one of the Bolsheviks shoots back and kills the man. 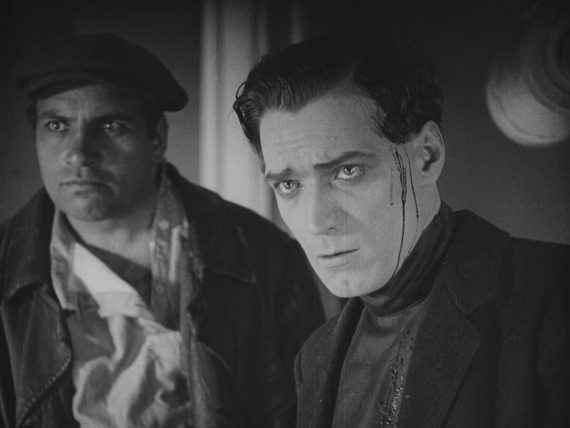 Jeanne walks in on the aftermath and sees that her lover was involved in her father’s murder. Before she has time to begin to come to terms with this horrific predicament though, Andreas tells her she must flee as the Red Army will soon take over the city. So, Jeanne moves to Paris and finds work and accommodation with her private detective uncle, Raymond (Adolph Edgar Licho), and blind cousin, Gabrielle (Brigitte Helm).

Unfortunately, Khalibiev also heads to Paris and Raymond’s agency, after intercepting a letter Jeanne had meant for Andreas. He catches a glimpse of the cash in Raymond’s vault and hatches a plot to get his hands on it.

Khalibiev woos Gabrielle who, being blind and sheltered by her father, has never found love so is easily won over. They’re due to be married but a drunken confession brings out the truth and puts the engagement to an end. 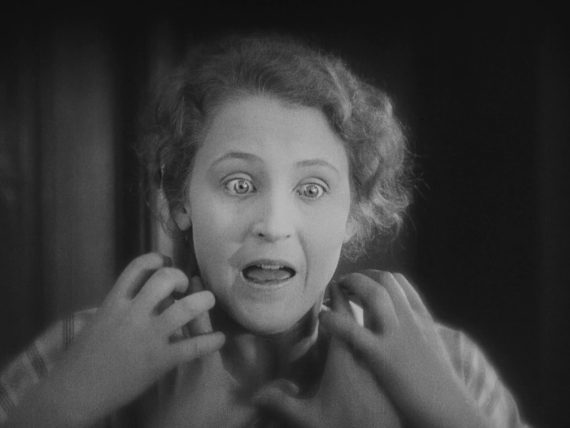 Khalibiev doesn’t give up that easily though, particularly when he discovers Raymond is due a huge payout after finding a priceless diamond that had been reported missing.

As my brief synopsis might elude, despite the title and top billing of Édith Jéhanne as Jeanne, the film becomes much more about Khalibiev as it goes on. The dramatic moment when Jeanne discovers her boyfriend was involved in killing her father is surprisingly forgotten quite swiftly after the event. She seems to forgive Andreas rather easily, which puzzled and unsettled me for a while.

However, once I accepted that fact and the gripping, if melodramatic and uneven, plot developed, I fell in love with the film. It’s based on a novel but reportedly a lot of the political aspects were taken out. The setting is one of political turmoil but little attention is paid to this in the story. The tragic ending of the novel is changed too. Pabst claims UFA made him give the film a happier, ‘American’ ending and it is a little too conveniently tied up but I didn’t mind too much as I was so swept up by the drama. 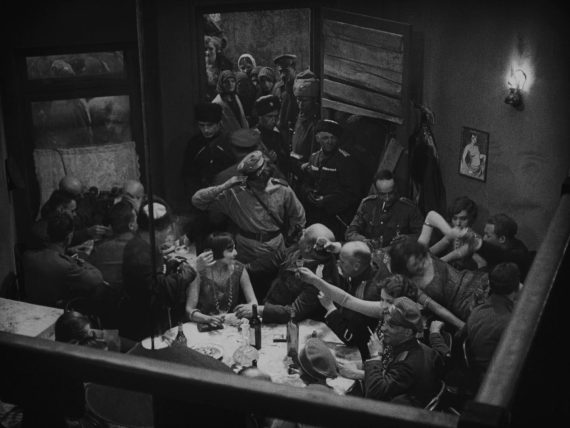 What impressed me most of all though was the film’s style. Pabst and cinematographers Robert Lach and Fritz Arno Wagner (the latter of whom also shot M, Nosferatu and Spione) craft some striking visuals. Great use is made of the elements, mirrors and windows as well as some unusual, cleverly thought out compositions. With convincingly natural-looking sets and a fair amount of location shooting, it has a near-modern look. A close-up track-forward into the mouth of a screaming woman in one scene even reminded me of the work of the Coen Brothers.

Aiding this forward-thinking visual style is some exceptional editing. Pabst was reportedly an early practitioner of editing on movement for fluidity and it works a charm here. The film really flows together nicely, from start to finish. This sense of motion is also aided by a combination of camera movement and busy, action-packed frames.

Some (though not all) of the cast are very strong too. Jéhanne isn’t given a great deal to do following the important early scenes, but does a great job, nonetheless. Also making an impact in a fairly lightweight part is Brigitte Helm with her startling gaze and convincing, if rather ‘large’, portrayal of the blind Gabrielle. 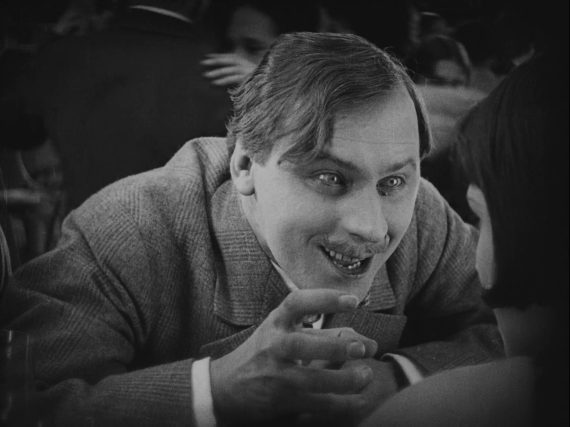 The real star of the show is Fritz Rasp though. As mentioned previously, his Khalibiev drives things forward through most of the film. His character is utterly repulsive but impossible to take your eyes away from, aided by Rasp’s rich portrayal that can be a little over-the-top but delivers the goods in spades. He’s an actor that cropped up in a number of German classics, including Metropolis, where he played the sinister Thin Man.

So, though some of the plot elements left me a little bewildered and the ending is a touch disappointing, overall The Love of Jeanne Ney is a feast for the eyes and rousingly enjoyable to boot, so comes out as another gem from Pabst. 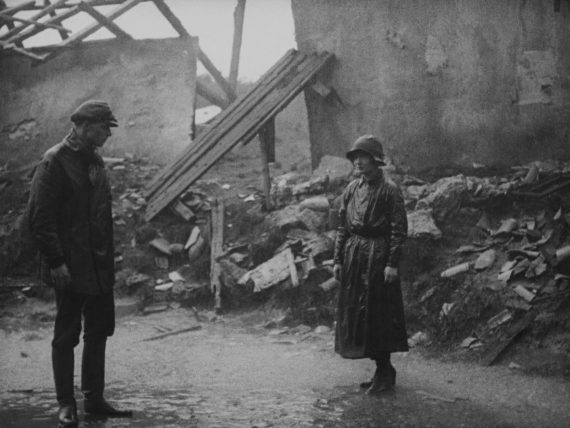 The Love of Jeanne Ney is out on 6th December on Blu-Ray in the UK, released by Eureka as part of their Masters of Cinema series. A statement at the start of the film says the original negatives were lost but this transfer still looks very good for a film of its age. Though there’s some light wear as you’d expect from a film from the 20s, the image is largely quite sharp and detailed.

Each cut of the film has a different score to accompany it. I watched the longer, German cut and enjoyed the grand orchestral score from Bernd Thewes. It’s embellished with some modern touches such as an organ that’s put to good use as well as some driving drums in places.

– 1080p presentation on Blu-ray, fully restored with a score by Bernd Thewes
– Optional English subtitles
– Alternate US release version with music by Andrew Earle Simpson
– Too Romantic, Too Ghastly – Brand New video essay by David Cairns and Fiona Watson
– PLUS: A collector’s booklet featuring new writing on the film by Philip Kemp

David Cairns and Fiona Watson’s essay is also extremely valuable, providing a fascinating analysis of the film and Pabst’s work as a whole.

The booklet contains a fine essay from Philip Kemp that discusses Pabst’s unusual career and spends a little time analysing The Love of Jeanne Ney.

Overall then, though I would have liked a commentary or similar to flesh out the supplements, it’s still a decent package that lovers of silent cinema should certainly pick up.