Awoke is a feature that is as relevant as ever with its detailed and often painful gaze at life for those who struggle with social welfare in any country. Jung Jae-ik and Seo Tae-soo’s emotionally draining feature takes us down paths we hope never exist for those who require help from their governments. An absolute must-watch.

After a car accident, Jae-gi (Jo Min-sang) finds himself paralyzed and unable to walk. Given his difficult economic circumstances, he needs to find a job – but this will only be possible with government support, which requires a physical evaluation. After his exam, he is shocked to receive a grade 5 rating, usually given to those with only minor disabilities. Disqualified from the support he desperately needs, he embarks on a quest through various bureaucracies to get his rating overturned.

There is the chance that you know someone, wherever you live in the world, who has some form of disability and must have gone through the horribly bureaucratic pathways to getting the support they require. It can be gruelling and destructive, especially when those rule-makers think they can decide on how disabled a person is and what level of support they require with some rudimentary tests. Hopefully, for the most part, people get the right level or grade and get the help they need, but for millions around the world like Jae-gi here in Awoke, they are not so lucky. They are too honest; they push themselves through the pain to show what they can do physically. Unfortunately, those poor souls are often given the wrong level and thus lose out on what they desperately need. Stuck in the cruellest of limbos, they cannot get the support they need for their form of disability, nor can they financially support themselves because of how they are.

Here, Awoke becomes more than a story about the fight for disabled people to be adequately supported. When characters such as Bong-su (Song Min-hyuck) and Byeong-ho (Lim Ho-jun) come to the fore, we see how some people have been able to scam their way through the system to ensure they get as much money and privileges as possible. Bong-su acts upon his disability to obtain one of the highest levels of support. Wisely directors Jung Jae-ik and Seo Tae-soo show Bong’s assessment first. We see how difficult he is making any movement while in front of the assessor. So, when we get to Jae-gi’s assessment, your heart positively sinks as you watch him try his best. It is heart-breaking and quite the scathing indictment of how disabilities are assessed. We have all heard the stories of people faking their injuries and disabilities to get more from the system, but to see it on the screen is almost soul-destroying, and that is what Awoke does so well. 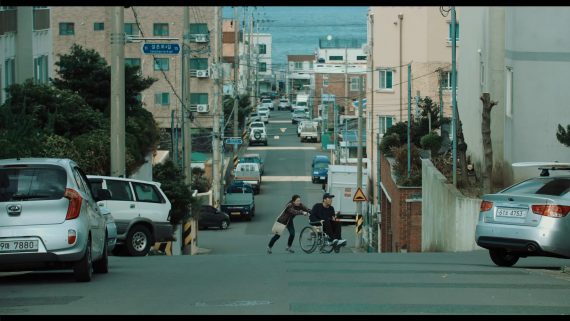 Further crushing you is Byeong-ho, a man who arranges all of the scams and does everything he can to earn money from the most disadvantaged. Not only does he take Jae-gi under his wing and pretend to care for him as he slowly finds his angle on him. He pursues Jae-gi’s goodhearted cousin Eun-ju (Han Tae-gyeong) when times also befall her in a rather horrifying couple of scenes. As irredeemable a character as you will find and one who you actively wish gets his comeuppance.

Jo Min-sang is unbelievable here; the pain and rising frustration etched on his face as he battles through each level of bureaucratic nonsense hit you far harder than you would expect. Yet, as he has the slight rises and the crushing falls throughout the film, you believe in him, and in his struggle and how personable he is; you keep hoping for that happy ending that he deserves. Equally, Han Tae-gyeong is tremendous as the cousin Eun-ju; she carries such pain as she sees someone she cares for going through this while struggling with her own problems. She has everything placed on her shoulders quickly, and in her meal with Byeong-ho, the strains and fear are evident in her.

It is just not the performances that excel here in the film; everything in Awoke works perfectly, the dulled colours throughout have you straining for hope, straining to see some light at the end of this tunnel for Jae-gi and Eun-ji. Yet, we can clearly see that this isn’t the story needing to be told. Instead, it is a story that highlights these issues.

Each hurdle that they encounter weighs on you, and that is exactly the point of the story. Getting the help one needs should never be this difficult, and for it to be so continually traumatic with extra hurdles of not being able even to trust those who say they want to help make it an endurance test of a film. Awoke takes our worst fears of being left in such a position and hammers home the point that other than coping with your disability, there is the chance that your own government may not be there for you. Films like this are so important to raise awareness of such situations, and as Jae-gi bookends the film with they deserve to live with dignity. A fantastic and essential film.