Hong Seong-eun’s feature film debut Aloners is a tender tale that highlights a growing societal issue and couples this with the striking performance from Gong Seung-yeon, and we are left with an empathetic film that we can all relate to in some fashion.

Yu Jina (Gong Seung-yeon) works alone at a credit card call centre, eats alone, smokes alone, travels home alone and lives alone in her apartment, with her headphones, phone, webcam, and television as her only real company. When Sujin joins the team, Jina, assigned against her will to train the new recruit, roughly and repeatedly spurns all her friendly overtures. Yet following the death of her mother and of a similarly lonely neighbour whom she never really knew, Jina starts tentatively re-evaluating her connections with her colleagues, her widowed father, and the world.

What is fantastic about Hong Seong-eun’s Aloners is how well you connect to it. For those who live alone and are in a 9-5 with no significant other, you can relate to Jina with the greatest of ease. Especially so from a personal standpoint, silence is the enemy to those who deep down crave company but have no ability or confidence in getting out there and obtaining it for themselves. For some, like Jina, it is also about self-preservation; this solitude is working at keeping her going, she needs it more than others can understand, and your heart pulls for her. Unfortunately, she has backed herself into this corner and views it as just the way she must go through life until her neighbour’s death.

When she is forced to mentor Sujin, she almost begs not to take on the role as that means that the perfect environment she had built has to come crashing down, even if it is just for one week. Her addiction to noise and her fragile ecosystem cannot handle such changes. It does not help that Sujin is the exact opposite of Jina, bubbly and cheerful; she wants to do well but is unprepared for her types of calls. Sujin wants to make friends and is actively outgoing, and indeed does try with Jina. However, Jina’s natural instinct to recoil from such lights has her being rather harsh with her new colleague. That cycle she is in is a tough one to climb out of. 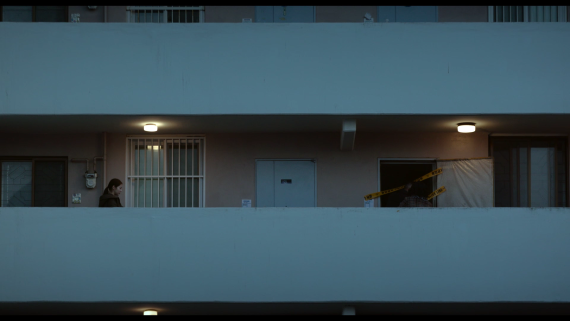 It is quite marvellous how Hong Sung-eun has created this world, one that is all too familiar to not only Korean’s (especially those who leave their hometown to take a job in a city) but as said, to anyone who has segregated themselves either accidentally or on purpose for their own mental health. Our director takes time and cares with her characters, allowing us to explore in her intimate drama; this layered observational approach works so well in Aloners that it has you considering your own experiences of doing something similar. It may not be in the same vein as Jina. Still, there is something everyone can take from it. Building up flimsy walls that will never be secure long-term but suffice for now and highlighting how a person who has built those walls can allow them to come down under their terms.

It also should be noted that while the writer-director has a keen eye for drama, she also allows far more comical moments to sneak into her film to help break the tension. Be it Sujin fumbling around with items on Jina’s desk on their first shift together or the time traveller caller. Still, even with these moments, there is something around the corner to hit us in the chest when the potential time traveller calls again but to Sujin. It becomes a conversation far more tragic, the same with Jina’s neighbour’s death, we can see the humorous side, and certainly, the media do when reporting said death. Still, there is a heavy amount of tragedy simmering around. Keeping that together and working as successfully as it does is a testament to the director’s ability, making Aloners a very enthralling launching point for her career as a filmmaker.

Gong Seung-yeon has a lot of work to do in Aloners, and she takes such responsibility in her stride as she owns each frame she is in. As a quiet character, she must use her eyes a lot and rarely do you feel anything but sympathy for her. We see the discomfort she is continually in, the awkwardness that she confronts each day, just going to work. She wants to hide away and Gong’s mannerisms encapsulate this perfectly. You see the desperation in her eyes, not just of that discomfort she feels, but of the yearning to not be the way that she is. It would be very simple just to have Jina come across as this cold, emotionless woman. However, Gong has made sure she is far more than that just with her physical acting. A truly wonderful performance by the actress and one that will have you searching for more of her work.

What is striking and indeed welcome is that no one throughout the film tries to be that person to help get Jina out of her shell and be this new person that they want her to be. She is practically alone in every fashion, and it is up to her to find the strength to grow and be the person she believes she can be. Sure, characters are nice and talk to her, but they sense her distance and rarely press. It is the small things like this in Hong Sung-eun’s script that works so well. This intimate film could easily have strayed off the road, yet we never betray Jina’s journey, and by keeping true to itself, it becomes a far stronger film for it.