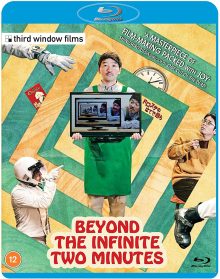 The Kyoto-based organisation Europe Kikaku work largely as a theatre group but have also been involved in some short video projects. They always wanted to one day make a feature film and, eventually, that dream came true when an independent cinema, Tollywood in ​​Shimokitazawa, saw a quirky time-travel short that writer Makoto Ueda made back in 2014 and suggested the group turn it into a feature.

Tollywood, alongside Shimokitazawa Film Festival, volunteered to fund the film, which became Beyond the Infinite Two Minutes. Initially only playing in a 40-seat theatre, word of mouth and a crowd-funding campaign to fund a larger-scale cinematic release led to the film becoming a minor hit in Japan (the press material call it a “massive hit” but I can’t see any figures to substantiate this claim) and it also won several awards at film festivals around the world.

Third Window Films are now releasing the film in the UK on Blu-ray DVD and VOD. Dubbed the ‘next One Cut of the Dead’, due to its sleeper success, original concept and one-take visual approach, it sounded intriguing. Plus I’m a sucker for time-travel movies, so I volunteered to take a look and my thoughts follow. 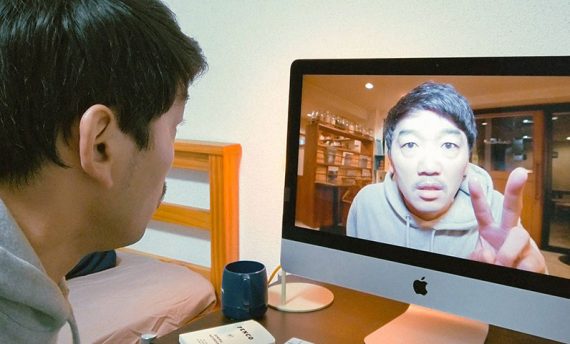 Beyond the Infinite Two Minutes sees cafe owner Kato (Kazunari Tosa) discover that the monitor in his bedroom above the cafe provides a glimpse two minutes into the future, whilst a TV downstairs shows what happened two minutes in the past.

He shows a group of friends this bizarre phenomenon and they gleefully experiment with it, soon bringing the two monitors together to face each other, creating a Droste effect (look it up, it’s difficult to explain in words). This allows the group to see even further into the future, much to the frustration of Kato, who thinks meddling with time is dangerous.

I love a good time travel movie and Beyond the Infinite Two Minutes manages to take a fun and unique look at the concept. Whereas a lot of related films operate on quite a grand scale with world-altering, or at least life-altering consequences, this keeps things refreshingly simple. The group in the film are largely just goofing around with their new gadget and later scheme about ways in which they can make money from it. The stakes are raised as the film goes on, but this is largely a light romp. 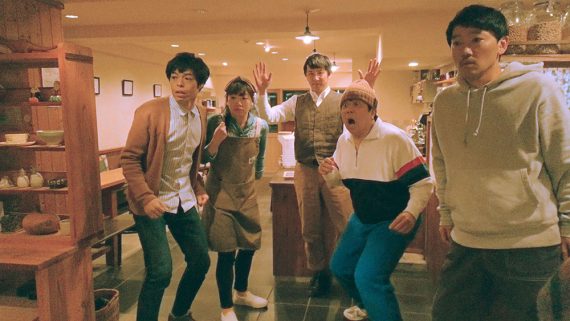 This less cluttered approach also means the film avoids the usual inherent flaws and plot holes you get when tackling time travel. I’m sure the more eagle-eyed will spot issues but I couldn’t find any. I thought there was a flaw at first, but I went back and looked at some potentially problematic scenes and saw that director Junta Yamaguchi had thought of it (I wouldn’t want to explain this further for fear of spoiling the story).

In this era of cinematic epics that continue to push expectations of length in blockbusters, it’s also refreshing to see a film that doesn’t feel the need to pad out the running time with extra fluff, running to a lean but perfectly formed 70 minutes.

There is space given to an on-screen romance though, among the time-travelling shenanigans. This is subtly sweet and helps bring about a satisfying conclusion that once again avoids overstating things with any kind of thrilling set-piece.

The performances can be quite broad, which might likely be due to the theatrical background of the group that made the film, though this is a trope common to Japanese cinema in general. The theatrical experience of the actors will have also helped them deliver appropriately similar performances to match the ‘time TV’ to the ‘live’ material. The style can come across as a little hammy though, to western audiences. 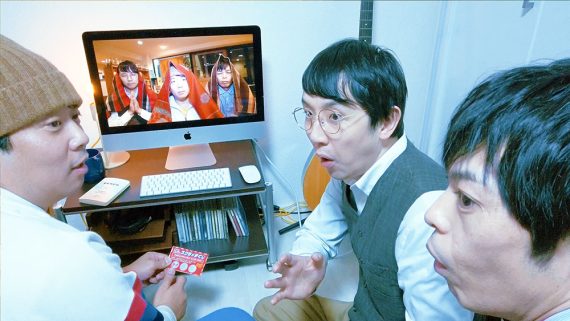 Also making theatrical performers an ideal choice for the film is the fact it was shot in a ‘long take’ style, where it’s made to look like one long shot from start to finish (though there look to be plenty of hidden cuts). This approach can feel quite gimmicky and has been cropping up a little too often so doesn’t feel as unique or impressive as it once did (Crazy Samurai: 400 vs 1 is a prime example of the technique begin detrimental to a film). However, here it works in making the central conceit more believable as it clearly plays out in real-time.

The one-take approach also makes the achievement of the cast and crew in making the film all the more impressive. On top of the usual difficulty of nailing performances and camera movements whilst shooting long, unbroken takes, the time-loop aspects made it even more tricky to pull off as the footage playing on the two screens was pre-recorded and played live on set, rather than being digitally added at the post-production stage. It meant the cast had to go through timed rehearsals, amending the script regularly so that each section would fit the two-minute loop structure perfectly.

Also impressive is the fact the film was largely shot on a mobile phone (other than the ‘on-screen’ material which appears to have been shot on a lower-end digital video camera). Granted, the film doesn’t look pretty, but it’s still quite an achievement to have pulled off a feature film on such basic equipment. Using a phone probably made it easier to move around the often quite small locations though and maintain the one-take style without lugging big, heavy equipment around. Plus it saved a lot of money, of course. 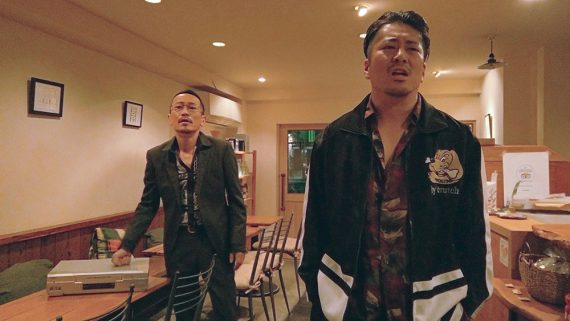 It’s the script that’s the real star though. With its perfect balance of clever sci-fi concepts, light comedy and romance, Beyond the Infinite Two Minutes is a short and sweet spin on the time travel movie that does enough to impress without getting bogged down in its concept. It’s also a great example of how a unique and hugely enjoyable film can be made with minimal resources and even manage to make money. Hopefully, its success continues with this UK release and the filmmakers continue to craft gems like Beyond the Infinite Two Minutes.

Beyond the Infinite Two Minutes is out now on region free Blu-ray, DVD and VOD in the UK, released by Third Window Films. I watched the Blu-ray version and it looks about as good as a film shot on a mobile phone can look. It’s sharp and colours are natural. The audio is very good too, coming through clearly and well-balanced.

It’s not a great deal of supplemental material, but what is here is of great value and the important bases are covered, even if none of the extras are very long.

I particularly liked the ‘making of’. The behind-the-scenes footage and narration help you better appreciate the challenging nature of the shoot and there seems to be a nice, friendly, supportive atmosphere on set, even during testing situations.

Junta’s interview is similarly enlightening on how the film came about and how it was received.

Also included is Howling, which is the original short that inspired Beyond the Infinite Two Minutes. The concept is the same and some of the dialogue was even carried over but, due to the reduced length, the concept isn’t explored quite as fully and the conclusion is less satisfying. It’s a fun little film though and you can see why it inspired the group to take the idea further.

So, a solid package for a little gem of a film.

* I would also recommend reading this interview with writer Makoto Ueda for more context on the film’s production, though he mentions that the Japanese physical release has 3 commentaries, which are sadly not included on Third Window’s discs.