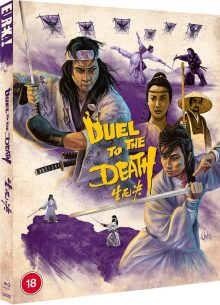 Siu-Tung Ching had begun working in the industry as an action choreographer and became known for his work on the fight scenes for a popular TV series called ‘Tien Chahn Biehn’, which starred Norman Tsui Siu-Keung (a.k.a. Norman Chui). The popularity of this series allowed the pair to be brought together for Ching’s directorial debut, Duel to the Death. Ching would go on to direct several Hong Kong classics following this, including the Chinese Ghost Story and Swordsman trilogies as well as act as action choreographer on some major films, including Zhang Yimou’s Hero. However, it’s that first film of his that I’ve always used as a bit of a ‘go-to’ whenever anyone wants a recommendation for a good martial arts movie.

Ever since I saw it back in the early 2000s, I’ve been a fan of Duel to the Death. It’s never been as well-known as a lot of the other big Hong Kong martial arts movies of the era though, probably due to the lack of a worldwide star, such as Jackie Chan, Sammo Hung or Jet Li. Because of this, I was pleasantly surprised when I heard Eureka were to release the film on Blu-ray. I was also pleased to see the hyperbolic praise being laid on it in the press materials, so I mustn’t have been alone in my love of the film.

Needless to say, I snapped up a copy of Duel to the Death when one was offered and my review follows. 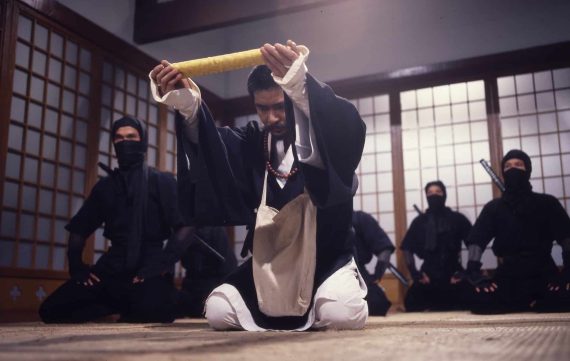 The film sees Chinese sword-fighting champion Ching Wan (Damian Lau) and his Japanese equivalent Hashimoto (Norman Chui) prepare to face off in an official duel held every decade, to fight for their nation’s honour. Ching has been trained by both Shaolin monks and a crazy forest-dwelling master. He contemplates the meaning of the duel, whilst Hashimoto lives by a strict code of honour, with little call for emotion.

During the run-up to the duel though, a band of ninjas, under orders from the Shogunate and led by Master Han (Paul Chang Chung), have been stealing secret martial arts scrolls and kidnapping Chinese fighters. Once our heroes discover this, they uncover a plot to rig the duel, throwing the whole affair into question.

It had been a fair few years since I’d seen Duel to the Death and my prevailing memory of the film, and the reason I’d always recommended it to martial arts movie fans, was how bonkers it is. 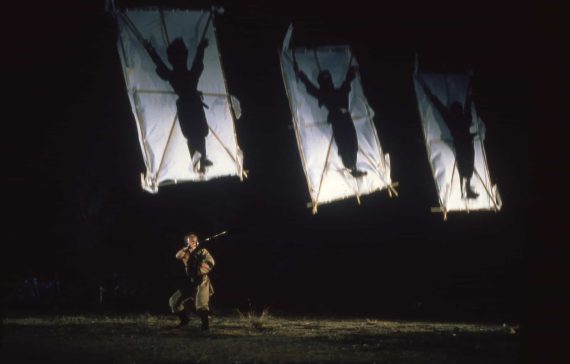 It’s the ninja sequences that are most ludicrous. There’s a giant ‘mega-ninja’ made up of several standard-sized ninjas, then flying ninjas, exploding kamikaze ninjas, a stripping female ninja that distracts a monk with her naked body and, most crazy of all, you get a decapitated head that ends up skewered on a tree branch, managing to say a few final words before exploding!

These scenes, on top of some impossible acrobatic feats performed by the martial artists, make for a film that’s hugely entertaining from start to finish, though mad as a bag of spiders.

However, on this fresh rewatch, in a beautifully remastered HD transfer, I realised that, behind all the wacky fantastical shenanigans, lies a pretty damn good film. 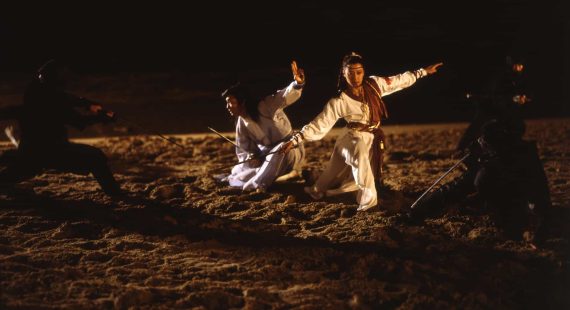 One interesting aspect is how Duel to the Death actually becomes a film that is anti-violence. Despite the swathe of action set pieces and bombastic title, we eventually come to realise that the duel we have been building up to is pointless and that winning or losing doesn’t matter if you’re dead.

The film is also admirable in how it shows both duelists in a positive light. The Japanese are often portrayed as villains in Hong Kong/Chinese martial arts films (think Fist of Fury), but here one of our two heroes is from Japan and even the villains, once eventually unveiled, are from both nations.

The two central protagonists are quite different though and this contrast is what provides the main substance of the film. It examines the different approaches the men take towards the duel and towards conflict, competition and honour, in general. This touches on some stereotypical ideas of the Japanese mentality to such things, but it’s handled with reasonable depth for what seems, on the surface, to just be another goofy martial arts movie. 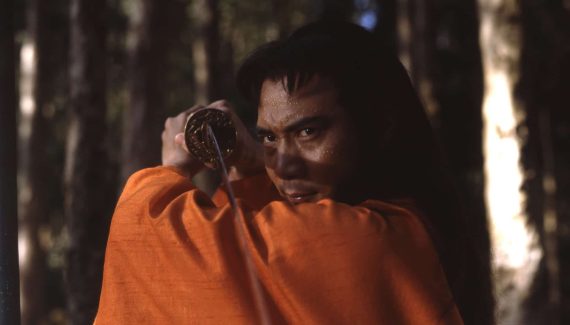 The film tries to give the Hashimoto character and associated scenes/characters a real sense of being Japanese too (despite strangely deciding to cast a Chinese actor as Hashimoto). On top of obvious things like costumes and sets, the way the Japanese characters fight and use their swords are more in tune with that country’s techniques too. I even detected nods to the formal, carefully framed style of shooting typical to Japanese cinema, in appropriate places.

The film looks beautiful in general, and this is something I’d either forgotten or never noticed on DVD. Its cinematography is notably more impressive than most Hong Kong martial arts films of the era, with some wonderfully atmospheric lighting, energetic camera movement and effective use of depth and perspective. Great use is made of locations too, particularly the incredibly dramatic final stand-off on a cliff edge next to crashing ocean waves. 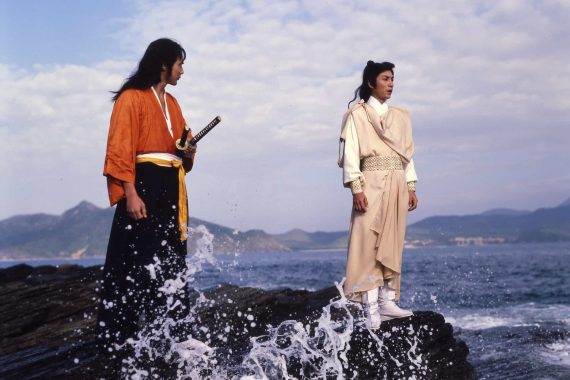 In his interview on the disc, Norman Chui states that he believes the film was quite influential and groundbreaking in how the action was staged too. The editing is much more rapid than most Hong Kong martial arts movies of the era. Rather than letting most of the fights play out in long shots, the camera picks out important details to tell the story in rapid montages. This allows for the wild, gravity and physics-defying moves the characters pull off. It might have helped pave the way for the over-edited Hollywood style of martial arts scenes and goes against what I’d typically prefer, but it works remarkably well here.

It was also quite groundbreaking in its use of wirework. Wires had been used often before in Hong Kong action movies, but rarely to this extent and in such gloriously over the top fashion.

Overall, it’s grand, operatic wuxia at its most spectacular. It’s utterly bonkers, eschewing logic and physics for a series of ever more ridiculous set-pieces, but is all the better for it. Beyond this carnage, there’s a decent examination of the futility of conflict too, as well as some marvellous cinematic craftsmanship. So it’s a film that can be enjoyed both on the surface as a wild ride and beneath as a fine piece of work in its own right. 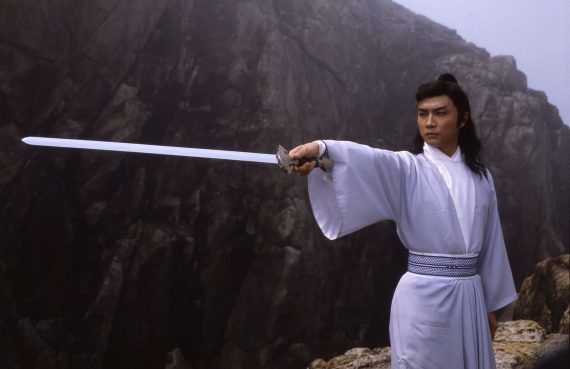 Duel to the Death is out on 20th September on Limited Edition Blu-Ray in the UK, released by Eureka as part of their Eureka Classics series. It looks glorious, with rich colours and sharp details. You get both Cantonese and English dubbed options. I watched the film with the former track and it came through nicely.

Frank Djeng’s commentary is loaded with interesting facts about practically everyone involved in the film, as well as discussing the locations used and the shape of the Hong Kong film market of the time. His tracks are always welcome on these Hong Kong releases and he doesn’t disappoint here.

The interview with Manfred Wong runs around the half-hour mark and goes into reasonable depth discussing his career and the process of writing the film itself. He’s honest about his input into the film and that of the director, so has some enjoyable comments to give.

Norman Chui Siu-keung tells some interesting stories of the Shaw Brothers/TVB actor training he took, in his interview. He also discusses his role in Duel to the Death and his preparation for the part. It’s a decent piece.

Flora Cheung’s interview is quite enjoyable too. She doesn’t have anything particularly eye-opening to say about the production, instead mainly describing how important it was to her career. She has a pleasant and bubbly personality though, so it’s a diverting enough addition to the package.

The booklet consists of a pair of insightful essays on the film, as well as some wonderful archive promotional material.

So, a very strong package for a film I’ll always happily recommend to martial arts movie fans. Get it bought.