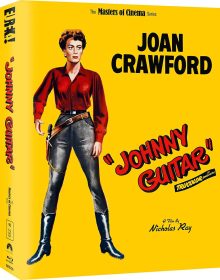 On its original release, back in 1954, Nicholas Ray’s unusual western Johnny Guitar met a less-than-stellar reception in the US. The box-office takings weren’t too bad for a film not from a major studio (it was made by Republic Pictures) but it hardly broke any records and its critical reaction was pretty poor. Variety stated, “let’s put it down as a fiasco”.

However, the Cahiers du Cinéma critics over in France, particularly François Truffaut, looked much more favourably on the film, singing its praises and even referencing it in some of their own work, further down the line.

Perhaps aided by this support, Johnny Guitar grew in stature over the years, eventually being seen by many as either a cult favourite or a straight-up classic.

Due to its now great reputation and the fact it helped inspire Once Upon a Time in the West, my absolute favourite film, let alone western, I’ve been keen to see Johnny Guitar for a long time. Somehow it’s always eluded me though and in recent years I’ve been holding out for a Blu-ray release.

I needn’t hold out any longer though, as Eureka have heard my call and are releasing Johnny Guitar in a handsome Limited Edition Blu-ray package, complete with the usual bells and whistles that come with their Masters of Cinema discs. 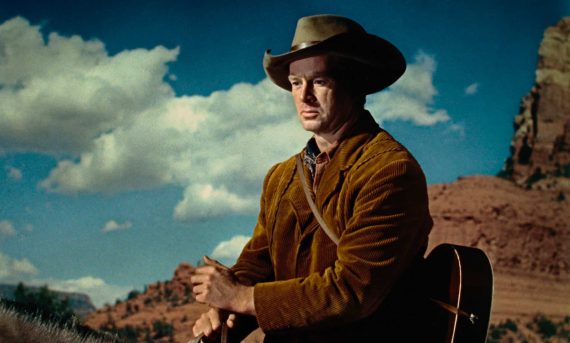 The film sees Sterling Hayden play the titular cowboy, who heads towards the town of Red Butte, Arizona at the request of old flame Vienna (Joan Crawford). On arrival, Johnny finds she’s in the middle of a vicious spat with the nearby townsfolk. A mob, led by Emma Small (Mercedes McCambridge), are claiming she’s in cahoots with a gang led by “The Dancin’ Kid” (Scott Brady), who they believe killed Emma’s brother.

Vienna refutes their claims and defends the Kid, with whom she has also had a fling. Emma won’t stand down though and pressures notable rancher John McIver (Ward Bond) into giving Vienna and The Kid’s gang 24 hours to clear out of town before they lynch them.

Vienna won’t give up so easily though, as she’s built her saloon just outside of Red Butte knowing that the railroad will be developing through there soon. Her blood, sweat and tears are in that place and, besides, she isn’t about to be pushed around by a jealous young woman (she believes Emma is angry at her because The Kid has toyed with Emma but favours Vienna). The saloon owner stands her ground and hopes that Johnny, who is hiding his previous gun-toting past, can help protect her. 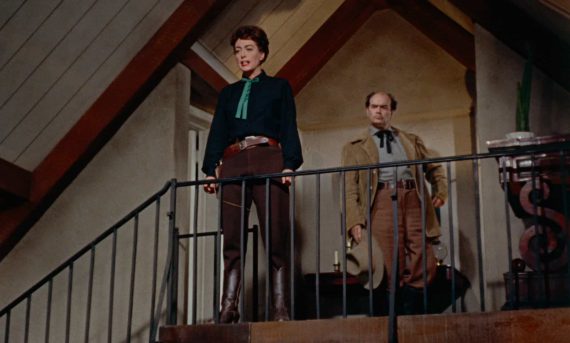 Having finally seen Johnny Guitar after many years of wanting to, I found it didn’t blow me away as much as I’d hoped, but I can still see why it’s so highly regarded.

It’s an unusual film, that can seem overbaked in some fashions. Martin Scorsese and some of the other contributors on the special features included on the disc call Johnny Guitar “operatic” and I think that’s a good way to describe it. The performances, for instance, are larger than life in some instances. On top of Crawford’s typical grandstanding, Mercedes McCambridge amps it up to 11 (reportedly at the request of Ray, to match Crawford’s commanding presence). Emma’s glee at bringing down Vienna borders on orgasmic in places, or at least demonic (McCambridge actually voiced the demon in The Exorcist, which seems fitting after seeing this!)

In fact, the production was reportedly a bit of a nightmare due to a real-life rivalry between Crawford and McCambridge. The former was unhappy at the latter being cast, preferring Claire Trevor for the role, so Crawford made life hell for McCambridge. Supposedly, the famously fiery star threw all of McCambridge’s costumes in the road one day, after the crew had applauded her performance in a scene. Hayden got fed up with Crawford’s tantrums and bickering too. So there was a lot of tension on set. 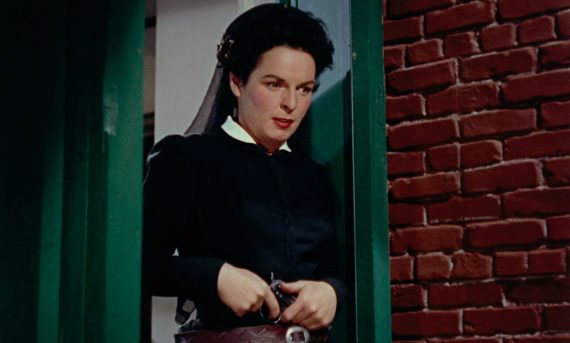 Ray had a background in the theatre as well as architecture and the large, lavish main set of Vienna’s saloon feels very much like one you might see on stage, in keeping with the operatic style. In fact, this single set is used for a large portion of the film. The first scene in there lasts for around half an hour, only breaking out for some quick shots just outside the entrance.

The use of colour is bold and brash too, with Crawford’s costumes standing out most notably, always contrasting against the earthy reds of the saloon or the blacks of Emma’s colour-coordinated mob.

Away from the grand theatrical style of the film though, Johnny Guitar is also rightfully celebrated for its substance. It’s a film that can be read in many ways. I won’t dig too deeply into all of these, but it’s worth mentioning a few key interpretations.

For starters, the film is often seen as an allegory for the McCarthy witch hunts and the booklet included here claims this was Ray’s original intention in adapting the novel. The sense of this is strongest in the scene where Emma forces a young gunslinger called Turkey (Ben Cooper) to finger Vivianne for her brother’s murder. You can also see allusions to this reading in how Emma riles up the townsfolk to drive out or string up the outsiders who don’t share their beliefs and values. 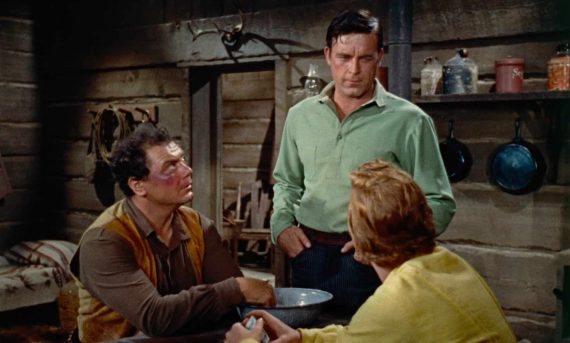 The film is about repression too. Numerous characters repress what they really want, causing furious, frustrated outbursts. In this sense, and others, some have made Freudian readings of Johnny Guitar too. Similarly, some have thought the film to have a queer angle, believing Emma’s not just jealous of Vienna, but in love with her. Some of the dialogue exchanges make allusions about the male characters too, such as “I never shake hands with a left-handed draw”.

Speaking of dialogue, with many of the scenes centring around verbal stand-offs between characters, the film is loaded with wonderfully barbed jabs. It’s one of the most quotable westerns of the era, in fact, with gems such as “down there I sell whiskey and cards. All you can buy up these stairs is a bullet in the head. Now which do you want?”

On a surface sense, the film is quite unique and groundbreaking too. There have been plenty of tough female characters in westerns over the years (the booklet has an interesting essay on the subject), but clearly centring the core drama around the conflict between two women makes Johnny Guitar quite unusual for the time. It’s still rare now, in fact. 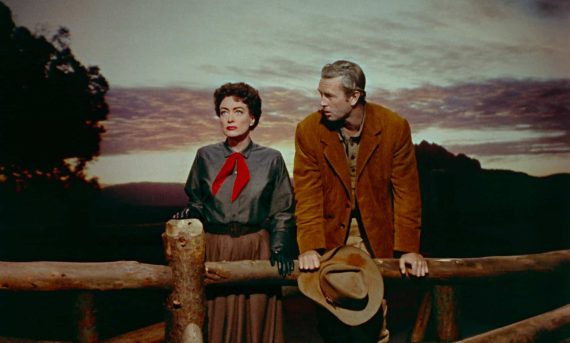 Reportedly, it was Crawford who strong-armed the producer and director into making her character the real driving force of the film (largely in the final standoff) after threatening to walk if they didn’t rewrite it that way. She may have been difficult to work with, but her meddling did help the film stand out in many ways.

Overall, Johnny Guitar is a peculiar blend of high melodrama and tough western that took me a while to attune to but won me over by the end. With much substance to mine under its surface, the film is ripe for rewatching and I imagine, without the hype that had built in my mind over the years, my opinion of it will only grow over time.

Johnny Guitar is out on 20th September on Limited Edition Blu-Ray in the UK, released by Eureka as part of their Masters of Cinema series. The film looks fabulous. Colours are suitably rich and the image is detailed with a lovely natural grain. It sounds great too.

Adrian Martin’s commentary practically gushes with praise for the film. He doesn’t beat around the bush in calling it one of the greatest films of all time. It’s a passionately delivered track with a huge amount of analysis to unpack.

Tony Rayns’ interview mainly discusses the film’s background and history whilst Geoff Andrew’s interview discusses the various readings that could be made of the film. They make a great combo.

David Cairns’ essay tries to figure out how the film ended up like it did, including exploring who truly wrote the film, as the credited writer was likely a front for a blacklisted author. Cairns can never resist some strange quirks and here he throws in some weird slightly animated plasticine models of the cast and crew to represent them during dramatised quotes.

The interview with Susan Ray (and someone else, but I didn’t catch their name) discusses Nicholas Ray’s ethos and attitude. Running alongside the interview is footage of the director running a workshop with film students, offering a glimpse of the man at work. It’s an illuminating piece.

Scorsese’s introduction is short but offers a condensed overview of the film’s history and qualities.

The booklet is excellent, as always. As well as an essay on the film itself, there’s a lengthy look at the history of strong women in westerns and a brief interview with Ray.

Overall then, it’s a well-stacked disc for a classic film, so comes highly recommended.