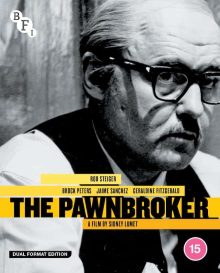 Sidney Lumet’s 1964 adaptation of Edward Lewis Wallant’s novel The Pawnbroker was one of the first American films to deal with the legacy of the Holocaust, or at least the psychological trauma it left on countless people. The Diary of Anne Frank (1959) and Judgment at Nuremberg (1961) had tackled the Holocaust previously but not looked at how it affected the survivors.

Lumet had been approached with the project when it was first doing the rounds but turned it down, largely due to his belief that they couldn’t successfully recreate Spanish Harlem in the UK as planned (taking advantage of British financial incentives). Several other big-name directors and producers turned it down too, including Stanley Kubrick, Franco Zeffirelli and Michael Balcon. Eventually though, the production sensibly moved to New York and Lumet accepted a late offer to direct after Arthur Hiller, the planned director, was fired.

Surprisingly, given the tough subject matter, The Pawnbroker ended up being Lumet’s first financially successful film (Twelve Angry Men, The Fugitive Kind and Long Day’s Journey Into Night may be well regarded now but they didn’t attract large audiences on release). The film isn’t as well-remembered as some of the director’s numerous classics but the BFI have chosen to give it a new lease of life by releasing The Pawnbroker on Blu-ray with their usual respectful treatment. I got my hands on a copy to see how it held up. 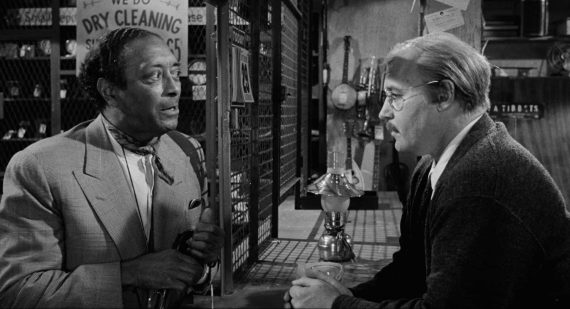 The film sees Rod Steiger play Sol Nazerman, an Auschwitz survivor now living in New York and working as a pawnbroker for local pimp Rodriguez (Brock Peters), who uses the shop as a money-laundering operation.

Sol is a shell of a man, still haunted by the memories of his past. His family were all taken from him during the Holocaust and he won’t let anyone in to help him come to terms with the fact they died and he survived. Even his relationship with his current wife (Marketa Kimbrell) offers little solace, not helped by the fact she was previously married to a friend lost in the camps.

In the pawnshop, the customers, who are often lonely and desperate, reach out to Sol for their own support but he shows them little sympathy. His assistant, Jesus Ortiz (Jaime Sánchez), idolises Sol though. Dreaming of opening his own pawnshop one day, to help find success away from the criminal underworld he was once part of, Jesus begs Sol to teach him the secrets of his financial success. Sol begins to offer a few tips but soon gets lost in his usual misery. Jesus remains persistent but is tempted to fall back on his old ways once Sol grows ever more distant and uncaring. 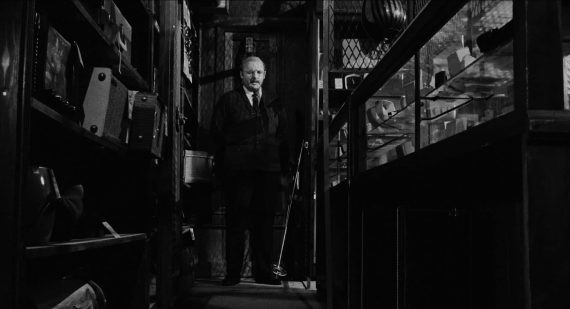 The Pawnbroker is unusual and fascinating in presenting a rare spin on the Holocaust film. For one, it’s rare to be set in America, long after the event. It’s also unique in having such an unlikable protagonist at the core of a film exploring the tragic devastation left by the Holocaust. On top of all of this, it boasts an unusual partially jazz-inflected soundtrack by Quincy Jones. It’s a bold and daring approach that certainly packs a punch, though perhaps too much of one.

The film is relentlessly bleak, offering little hope for any of its characters, let alone Sol. Most interactions between him and others revolve around money. It’s a very cold and cynical film due to this. Any attempts at warmer connections (most notably from Geraldine Fitzgerald as the lonely Marilyn) are usually shunned or extinguished by Sol. As such, the film proves to be a difficult watch. Granted, no film exploring the Holocaust is going to be a barrel of laughs, but there are usually at least some traces of humanity or hope to cling on to. Not here.

Lumet does a damned good job exploring the subject of survivor guilt though. He was a director with a background as an actor as well as in theatre but, unlike similar directors, he was also a great technician and craftsman. He was a master at using cinematic techniques to tell his stories and The Pawnbroker is no different. Its stark, low-key black and white photography and use of claustrophobic, cage-filled sets that clash with the chaos of the outside world, reflect Sol’s internal imprisonment. The bold use of harshly intercut flashbacks, to show Saul’s ever-invading memories of the Holocaust, is very powerful too. This style of editing had not been used in American cinema prior to this, though it had been seen in Alain Resnais’ acclaimed Hiroshima Mon Amour and some other European titles. 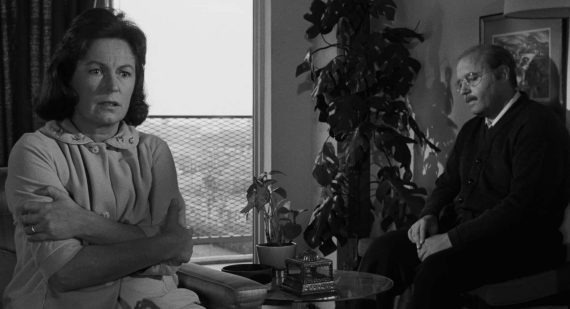 Lumet overdoes the symbolism in places perhaps, * SPOILERS * with a character named Jesus whose fate is unsurprising and the stigmatic nature of Saul’s self-inflicted wounds at the end. * SPOILERS * However, overall it’s effectively kept under the surface.

Lumet was wary of Steiger taking the lead role originally (the actor was brought on board before the director), thinking he’d play it too ‘big’. However, once they met and discussed the project, Lumet found Steiger shared a similar idea of how the character should be portrayed and was more than willing to tone things down. In the end, he did just that, offering a quietly intense and uncompromising performance. There are a couple of moments that threaten to show the often larger-than-life actor doing a bit of grandstanding, but Steiger resists from taking things too far.

Quincy Jones deserves another mention too, for his highly effective score. His music jumps between jazz and classical idioms in a strikingly unusual fashion. The contrasting styles reflect the clash between the modern life of New York and Sol’s entrapment in his tragic past. The score practically explodes with energy when the film breaks outside of the pawnshop, enhancing how overwhelmed Sol feels outside of his shut-away existence.

Overall, The Pawnbroker is a little too punishing for its own good but it’s an undeniably powerful drama and one that effectively showcases the great talents of Lumet, Steiger and several other members of the production team. 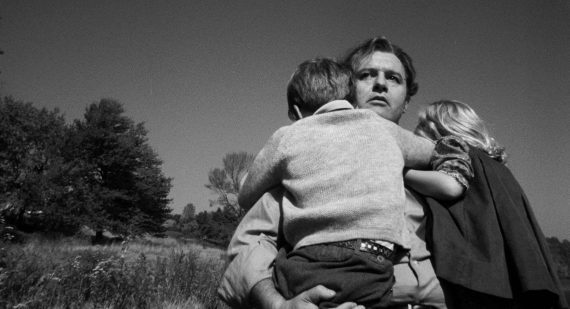 The Pawnbroker is out now on Blu-Ray, released by the BFI. The transfer is immaculate, with a crisp, sharp picture. The images in this review are from screengrabs to give you an idea of the quality. The picture is possibly too clean and sharp though, as you can clearly see the joins on Steiger’s hairpiece in places! Audio is strong too, with Jones’ score pushing through nicely.

It has a strong set of extra features to back this up too:

– Presented in High Definition and Standard Definition
– Newly recorded audio commentary by Maura Spiegel, author of Sidney Lumet: A Life and Annette Insdorf, author of Indelible Shadows: Film and Holocaust
– Guardian Interview: Rod Steiger (1992, 113 mins, audio only): Rod Steiger discusses his career and talks candidly about his mental health issues in this interview with film critic Tom Hutchinson. Recorded at the BFI’s National Film Theatre following a screening of The Pawnbroker
– Now and Then: Quincy Jones (1968, 20 mins): the legendary producer, musician, songwriter and composer is interviewed by Bernard Braden for his never broadcast series Now and Then
– Ten Bob in Winter (1963, 12 mins): Lloyd Reckford’s Ten Bob in Winter is one of the most notable shorts to come out of the BFI Experimental Film Fund. An early classic of Black British cinema about the intriguing social dynamics that arise as a ten shilling note is passed around the Black community
– Trailer
– The Pawnbroker gallery
– **FIRST PRESSING ONLY** Illustrated booklet including new writing on the film by filmmaker and film historian Jim Hemphill, an essay on Quincy Jones by Nicolas Pillai, and a Sidney Lumet biography by Maura Spiegel

The commentary provides some very deep analysis of the film. I felt perhaps they were reaching a bit far to find meaning in one or two moments (the use of a lawnmower in a scene, for instance) but it’s a fascinating track, overall.

Steiger’s lengthy interview is a lot of fun. He has plenty of anecdotes to tell about his long career and interesting life. He’s also frank about his mental health problems. The Pawnbroker gets a few mentions. He calls it one of his favourite performances at one point, so he obviously felt strongly about it.

The Quincy Jones interview doesn’t get into his work on The Pawnbroker specifically but it provides a deep, intelligent discussion on the state of music at the time and his varied career.

‘Ten Bob in Winter’ is an enjoyable short that takes a breezy look at British social problems of the time. It uses some interesting techniques to tell its neat, relatable story too.

The booklet is filled with essential essays on the film, those involved and the supplemental material too. It’s as valuable as any interview or commentary.

So, it’s a very well-compiled release for a great film and comes highly recommended.