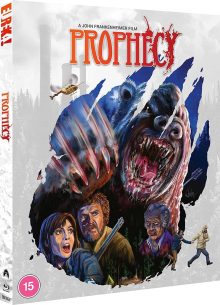 Is it a bird? Is it a plane? The need to pinpoint or label something exactly appears to be a desire attached to humanity. Comparing this with Hollywood’s copycat nature of chasing whatever trends and genres are en vogue at the time leaves some projects caught between a rock and a hard place. Such is the legacy of the John Frankenheimer film from 1979, Prophecy, an eco

The plot revolves around a land dispute between a logging company and the indigenous native American population in and around a woodland area. The relentless push of industry and capitalism butts heads with a people who live and are at one with the land around them. Dr. Robert Verne (played by Robert Foxworth) is hired by the Environmental Protection Agency to write a report into the impact of the logging enterprise on the land. Everything is complicated by the mysterious death of three search and rescue members on the trail. The natives are attributing the murders and subsequent state of the bodies to the legend of ‘Katahdin’, a protector of the land who will strike any who threaten the land. The logging company representatives see this as a cynical ploy by the native people to deter industry.

The film sets about balancing the investigation and discovery of both parties through the eyes and events of the doctor and his wife, played by the ever-recognisable Talia Shire. The questions raised about the environmental impact of a seemingly innocuous logging operation versus are punctuated by random acts of violence as main and side characters alike experience attacks, usually under the cover of darkness.

As if there wasn’t enough complexity in the screenplay, there are numerous layered (and sometimes head-scratching) side plots. Talia Shire’s character has just found out that she is pregnant and is reluctant to share the news with the doctor. The indigenous people seem to be represented by a singular character, Hector who is the only one who really seems wedded and knowledgeable of the ideals that they are fighting for.

What appears to be a film that seeks to make salient arguments about the impact of capitalism on the planet, which for a film released in 1979 would/should have made a strong statement at that time. When you consider that the film had a well-respected director in John Frankenheimer at the helm. It is disappointing that its legacy is not linked to leading that type of conversation.

Which brings us to the film’s legacy. When this film was announced there was a collective groan as it was considered a misstep in Frankenheimer’s career, even if the film was quite successful commercially at the time of release. There is nothing new about a film taking some time to find its audience, especially those that films that fall within the cult film genre, but Prophecy doesn’t exactly scream late bloomer.

My overriding feeling at the end of each watch is one of disappointment. I enjoy a lot of the setup and elements of the horror that are doled out but there is too much going on to feel like a coherent piece of work. For every strong statement on the impact and responsibility of everyone to look after the world in which we live, there is a ridiculous rag doll series of deaths. Herein, lies the biggest issue with the film. Eco-aware films are serious by nature (excuse the pun however deliberate) but horror films, especially those with gruesome and visceral death scenes are supposed to be playful and fun.

The viewer sways between thought, repulsion and laughter like a fairground attraction gone wrong, yet each of the elements on their own and within a different film could have worked much better. It is hard not to believe that the success of films like Jaws and Aliens influenced the direction of both the screenplay and production of the film. On top of the unnecessary sub plots, the believability of each side’s motivations isn’t clearly defined. As alluded to earlier, there is no strong sense of community between the Native Americans, with them living far apart from each other. The logging company are not set up as progress at all costs either, which while quite intentional, leads to confusion, especially when both sides are so bloodthirsty and willing to sacrifice life to achieve their favoured outcome

An entertaining commentary packed with knowledge and enthusiasm for the film itself and its legacy. It looks at the people and places involved in the making of the film with many tit-bits that add a lot of flavour to each of the actors and characters involved as well as the occasional in joke. I’d be interested to hear more commentaries from Mr Harland Smith in the future as it added a lot to my appreciation of a film that was a few years before my time.

A two-handed commentary where each bounce off the other to comment on the themes and ideas that the film presents (of which they are many). It is fun and there is clear chemistry between both Lee and Emma throughout as each entertains the other as much as the audience. The quality of the audio recorded is not at the level of the other commentary but your mileage may vary in how much this impacts on your enjoyment.

David Seltzer is writer of good reputation, most notably for The Omen. He talks about his motivation and expectation in writing the script for Prophecy. He is also quite candid about the film’s reputation and how that has changed over the years. It is always a treat to hear from those who are at the core of any film.

This interview is the pick of the extras for me, with Tom McLoughlin talking about how he got into the world of movies to how he ended up acting as one of the creatures within this film. He also sheds some light on which scenes he was suited (again sorry for the pun) for and how that impacted some of the camera work. An entertaining interview that goes beyond the realm of just this film.

The booklet is fully featured with two pieces. The first one is an essay by Craig Ian Mann which looks at Prophecy’s place in at the tail end of the eco-horror movement within American cinema and how it links to the slasher / body horror genre which was in its infancy.
The second piece presents an interview with one of the cast, Ventia Obols-Graham, who talks about getting her break in the movie business. She expounds on how she became involved in Prophecy and what it was like to work with Frankenheimer.
All in all, a necessary addition to the overall package and a booklet well worth reading.

All in all, I enjoyed Prophecy much more than its reputation had prepared me for. It left me frustrated that a film which should have been a landmark film that stands alongside many of the more lauded contemporaries, got itself caught up in trying to too many things to too many people. I suppose this is the nature of cult films. Imperfect in many of its facets but curious enough to warrant further examination and multiple watches. A worthy addition to the Eureka lineup this year and a solid companion to the earlier double bill release of Shadow of the Hawk and Nightwing, earlier in the year.