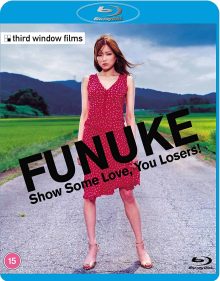 The Japanese family drama is a staple of world cinema. Family members clashing through their different stages of life creates natural gold dust on screen. Except this is a Third Windows Film release and (typically) they provide a sprinkling of the weird and zany to any staple. ‘Funuke, Show Some Love, You Losers’ is as dysfunctional as any you will ever see on screen. It is a family brought back together by the tragic death of the mother and father in the early moments of the film.

Let us meet the Wago family. Shinji is the brother, the new head of the family who has a noticeable scar above his right eye. He appears to be the only breadwinner in the unit. He is married to the subservient Machiko, who is almost robotic in her insatiable attempts to please not only her husband but the entire family. Whether that is rushing out to the shop to meet unrealistic meal requests or playing the meek bystander amid family squabbles.

Then there are the two sisters. The younger, Kiyomi, lives a solitary life wrapped up with her own thoughts, that blossoms into fits of inspiration where she draws graphic depictions of her life in the form of manga art. She is extremely talented but has been shamed into hiding it from the world rather than revelling and sharing. The other sister, Sumika, is an aspiring actress, who has been living in Tokyo, trying to find her big break. She returns home, not to grieve but to enquire as to how she continues to receive money from the family to maintain her city lifestyle.

The homestead is in a remote part of Japan, one of those places with only a convenience store and a post office, with no cell signal. These are the cliff notes, as each mystery and emotion is probed over the run time; the relationship of the husband and wife; the strange hold that Sumika seems to have over Shinji; how the family operated when the parents were alive; how the relationship of the sisters resulted in their distance from each other, both emotionally and in terms of distance.

All of this may read or seem to be routine and barely worthy of note, but the entire piece is spiced up by Sumika’s character. She is unquestionably, one of the most hateful characters I have ever seen in any film. I couldn’t even describe her as evil as she never does anything overtly to harm others. However, her complete disregard for other’s lives or her complete lack of self-awareness over her role in her inability to live her dreams. She expects everyone to provide and make sacrifices for her, while she is ill prepared to do anything to improve her own outcome.

While I admit to being conflicted as to whether I was seeking redemption or punishment for Sumika as the film progressed, the emergence of each of the character subplots gave the film renewed interest through the middle act of this black comedy. There is a strong sense of world-building and it is to the films strength that I was left wishing that I could have delved deeper into the history and interest of the other characters.

A 25-minute making of feature that takes you behind the scenes of the film itself. It is narrated by Kiyomi but splices interviews with the main cast in with montage of film sequences. It feels like a promotional piece showcasing what the film is about rather than an expose to delve further after watching, but fun nonetheless

A set of low-quality scenes that total just over 3 minutes. Most of them centre on the character of Machiko and we do get a sense of the playfulness of the actress involved but there is little added to the story or lore from this.

There are two short extra scenes which show Sumika’s high school play and tv appearance that are used in much shorter form in the film itself. They are interested curiosities and add to the playful nature of the film itself.

If you are fan of Third Window Films releases, this fits right in the middle of them. There is a touch of Taste of Tea and The Woodsman and the Rain about a film that never takes itself seriously, even when the film hits more serious and darker themes. The print looks fantastic, full of vibrant colour befitting of a place that seems removed from both time and civilisation. Moments of tragedy and farce are treated alike and give the film a jovial twist. Third Window are keeping up their excellent tradition of releasing quirky, fun and engaging independent films from Japan and this film is sure to please fans of many of their previous releases.