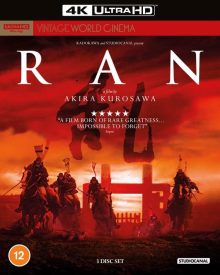 It is feudal Japan and Hidetaka Ichimonji, an aging warlord, decides to retire his throne. In his place he leaves his three sons between whom he divides his kingdom. Soon, however, the greed of two of his sons threaten to disrupt not only the balance of the lands they rule over, but also the very fabric of their family. 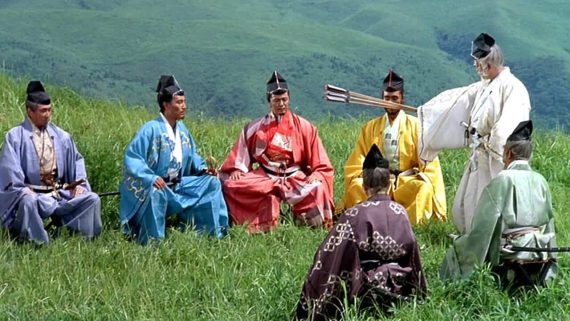 Akira Kurosawa’s Ran, one of the great Japanese directors final films, is considered by many to be one of his finest. Loosely based on Shakespeare’s King Lear, its tale of familial betrayal, lust for power and the ravages to time and old age is genuinely as epic as they get, combining Shakespearean tragedy, wit and drama with Kurosawa’s trademark penchant for samurai action.

David has reviewed Ran previously on this site and I very much echo his thoughts about the film. It is stunning, theatrical filmmaking with shots and dialogue being given time to breathe; the story never feels rushed and the characters are developed slowly with some incredible central performances. It’s a film that takes its time but doesn’t bore, instead using the stillness between words to draw the viewer into the story further. 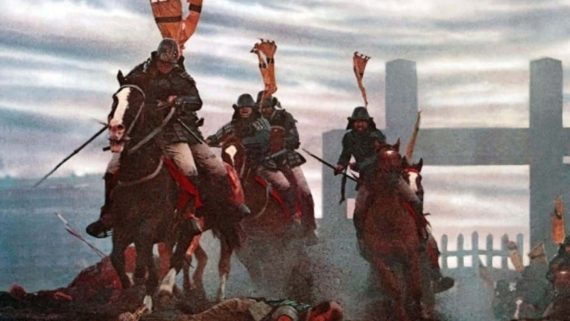 Ran is a very visual film and ultimately that’s where the draw lies for this new UHD release. Previously remastered into 4K for its Blu-Ray release back in 2016, this UHD goes one step further with a full 4K disc and HDR colour grading. It’s this colour grading that’s the star of the show here and, as someone who had never had the joy of watching this film before, being able to compare the Blu-Ray and HDR images was a fantastic opportunity.

The HDR utterly pops from the opening frames of Japanese nobles and warriors on horseback set against rolling green hills and blue skies. Kurosawa very much uses every inch of his full 16:9 frame as a canvas throughout this film and this first scene gives you an idea of what is to come. The palette used is remarkably vibrant and expansive, with distinct and purposeful colours used for each character and their respective faction, and their brilliant blues, greens and reds burst from the screen. Each frame is filled with things to look at and this new transfer opens up the film in a way SDR never could have done.

Nowhere is this more apparent than the central battle scene of the film. The fidelity here is stunning with the three different armies involved being clearly identifiable on the screen, the fire that gradually engulfs the battlefield a rich and hot orange, and the copious amounts of bright red blood (this is a surprisingly brutal film for its 12 rating!) painting each already vibrant frame. 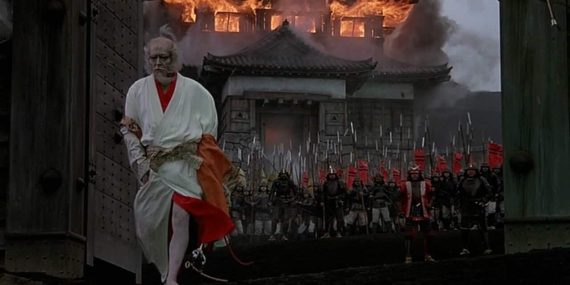 Perhaps disappointingly, however, is how much the resolution of the UHD version of the film seems to enhance the inherent softness of the image. Kurosawa filmed Ran almost entirely in wide shots which means there is little detail to pick out for the 4K image, leading to an image that seems to lack definition. This is a real shame in comparison to some 4K releases, but from a positive angle it does improve the painterly look of the film.

Sadly, another disappointment are the discs themselves. The 3 disc set that’s available is the new UHD transfer on one disc, and the 2016 Blu-Ray release on the other two, complete with the same bonus features. Sadly there’s nothing exploring the ne HDR grading, and owners of the older release may find little here to warrant a double dip beyond the (admittedly superb) new visual upgrade.

For anyone who has never seen this epic film and have access to a UHD screen and player, however, this release of Ran is the version to own. A classic in every sense of the word and an absolutely essential purchase for anyone interested in Japanese cinema.