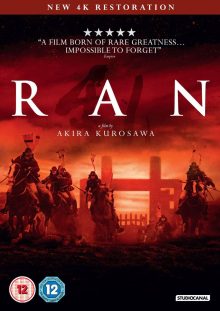 There are only a very small number of directors who have a fully ‘clean’ track record in my eyes (not including newcomers or those who died young). Even filmmakers like Spielberg or Scorsese, whose films I largely adore, have the odd clunker here and there or seem to have lost their touch over time. Akira Kurosawa however has blown me away with every film of his I’ve seen. Admittedly I’m far off watching everything he’s released, so I’m sure one or two of his lesser known titles won’t have the same impact, but I’ve watched a fairly healthy 8 from his filmography and haven’t been disappointed yet.

Ran, often considered his final masterpiece, is a film I first and, until now, last saw at least 15 years ago. At the time I did like it, but I’m not sure I fully appreciated it as I can remember feeling ever so slightly disappointed. I think it was the weight of expectation behind seeing it. I’d heard great things and from stills I was expecting an epic action extravaganza, but the battle scenes only make up a relatively small portion of the running time. What also probably didn’t help is that I saw it on VHS (probably in pan & scan) as DVD’s were only just beginning to grow in popularity at the time and high definition home viewing was but a dream. So I was delighted to be offered the chance to review Studiocanal’s new 4K restoration of the film, which is coming to cinemas, Blu-Ray and DVD in the UK. It gave me a chance to revisit the film with a more mature and clearer eye. 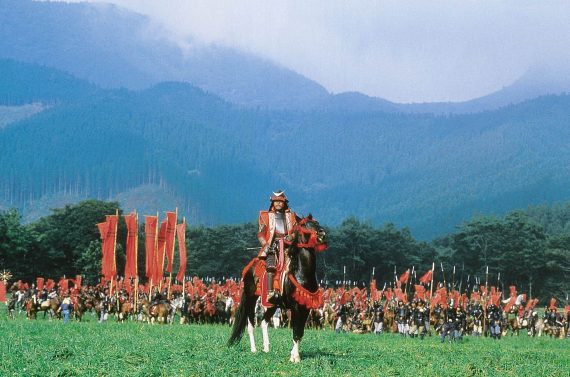 Ran takes Shakespeare’s King Lear (a play which I’m not familiar with I’m afraid so I won’t use it as a comparison) and transposes it to Sengoku-era Japan, much like he did with Macbeth for Throne of Blood. Whereas that was quite a straight adaptation (bar the language and setting), Ran does make a few fairly big changes though (or so I’ve been told).

It sees Tatsuya Nakadai play Hidetora Ichimonji, an aging warlord who decides to transfer power over his realm to his three sons, Taro (Akira Terao), Jiro (Jinpachi Nezu) and Saburo (Daisuke Ryû), before he dies. Saburo doesn’t think this is a good idea though and openly tells his father so, which Hidetora takes as an insult, prompting him to banish and disown his son. Taro is then made the chief ruler, with Jiro his second, whilst their father lives in Taro’s castle and retains his title of Lord without having the actual power to rule.

This set-up doesn’t last long though as Taro lets the power get to his head, swiftly pushing his father aside. Matters aren’t helped by Taro’s wife, Lady Kaeda (Mieko Harada), who is manipulating her husband into making some rash decisions so that she can sit with him as ruler of the castle which had originally been taken by force from her family at the hands of Hidetora. Once Taro and Hidetora’s relationship goes sour, Jiro steps in too, to take advantage of the situation and claim the throne for himself. So everything descends into a bloody mess of treachery and hunger for power, which, half way through, turns Hidetora into a crazed shell of his former self, trapped in a nightmarish hell of his own creation. 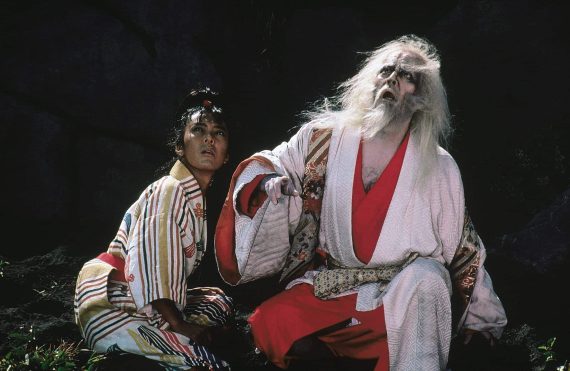 Well, this second viewing certainly restored Ran in my mind as the cast iron classic it was always hyped to be. It’s an astonishingly good film. Kurosawa’s mastery of the medium is ever-present. The epic battle scenes are what many discuss when praising the film and yes these are spectacular. A central sequence when Hidetora’s castle is overthrown by the armies of two of his sons is mind-blowing. There’s an incredible depth to each shot with so much action and layers of smoke and fire assembled in each frame without ever looking messy. The use of colour is striking too, with the bold primary colours of the sons’ banners utilised to great effect. The first half of this scene plays out with no sound effects either, just the orchestral score which gives the scene a stately beauty to counteract the blood and violence on display.

The quieter scenes are equally as strong too, aided by some great central performances. Mieko Harada as Lady Kaeda is particularly memorable. The scene where she approaches her brother in law after the death of her husband and forces herself on him at knifepoint to sleep with her then marry her is fantastic. Mieko has a terrifying menace to her performance and the swift staging of the attack is shockingly aggressive yet gracefully executed at the same time.

The performances in general and Tatsuya’s make-up have an air of theatricality to them, but I don’t mean this as a complaint, it seems purposeful and suggests a Noh theatre influence (or a nod to the Shakespeare play perhaps – Kurosawa always seemed more influenced by Western entertainment than Japanese).

In terms of writing, Kurosawa and his regular co-writers Hideo Oguni and Masato Ide do a wonderful job of transposing Shakespeare’s play to the screen. What they lose in terms of language is made up for in terms of storytelling. There’s quite a lot going on in the film (my notes were epic in themselves), but never too much to keep tabs on. The central family tragedy is always front and centre, despite the large scale battles going on around it, and the Lady Macbeth-like Kaeda character doesn’t get a huge amount of screen time, but the scenes are so powerful they carry a lot of weight.

I could rave about the film for several more paragraphs, but the film is a classic so you’ve probably heard about how good it is many times before. All I can say is you must watch it if you haven’t already or, if you have, it’s time to watch it again.

Ran is out in this new 4K restored form on DVD and Blu-Ray in the UK on 2nd May, released by Studiocanal. It is also currently playing in selected cinemas across the country. I was sent the DVD to review and I’m happy to report they did a fine job with the restoration. I’m desperate to see the Blu-Ray though as I’ve been spoilt by high definition in recent years so watching such a beautiful film in standard definition seemed a little wrong.

The special features are as follows:

Blu-Ray – as DVD, but with these added features:

Most of these features have shown up on previous releases, but they’re very impressive so you can’t complain and don’t really need any more. Front and foremost is AK, a feature length documentary from acclaimed filmmaker Chris Marker. It’s possibly one of the greatest ‘making of’ films ever made. Shot beautifully, it takes a refreshingly observational approach rather than relying on talking heads. To give the film structure and further depth, Marker narrates and there are some audio interview excerpts from Kurosawa here and there too. Interspersed between the footage are occasional clips from Kurosawa’s previous films to examine his style and approach and a brief glimpse of the devastating earthquake in Tokyo in the 20’s to highlight the importance that had on Kurosawa as a child. The on-set footage is fantastic, allowing an honest glimpse of the great director’s working practises and even offering some nicely comic moments in between takes. It’s a must see.

The interviews with DOP Mr. Ueda and actress Ms Mieko Harada are decent additions too. They discuss the amount of preparation done before shooting, which allowed for the best results to be achieved on the day. Historian Michael Brooke’s interview provides more background on the production and is great to listen to, as the features he’s involved with usually are.

The stage appearance feature is decent too, with cast and crew members offering some nice anecdotes about the production and their thoughts on the film.

Finally, the restoration featurette is an interesting little piece, showing the hard work and passion that went into bringing the print in line with the original and intended look of the 30 year old film.