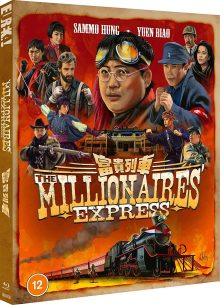 After taking a bit of a gamble with the less action-heavy Heart of Dragon, which performed quite well at the Hong Kong box office but wasn’t as big a hit as some of his previous blockbusters, Sammo Hung decided to take another risk. For his next turn behind the camera in a production for his own company, Bo Ho Film, Sammo decided to make a western. Though he’d long been a fan of the genre, Hong Kong audiences were not. However, by loading the film with stars and the mixture of action and comedy that had made him a household name in Hong Kong, Millionaires’ Express (a.k.a. Shanghai Express or Foo gwai lip che) was another hit for Sammo, becoming the second highest-grossing film of the year in its home territory.

I’ve always enjoyed Millionaires’ Express so was delighted to hear Eureka Classics would be releasing the film on Blu-ray in the UK with a host of special features, including a whopping four different versions of the film. I grabbed my ticket and boarded the train, to see if the journey matched up to my memories (apologies for all the terrible train analogies – I’ll leave them here, at the station – sorry!)

Millionaires’ Express has quite a lot of storylines but, basically, the titular train is headed across China, carrying not only many wealthy patrons but a group of Japanese warriors who possess an invaluable map to the treasure of the Terracotta Army. A large group of bandits plan to intercept the train and take the map for themselves.

However, Ching Fong-Tin (Sammo) has plans that get in the way. He’s come back to his hometown with a group of prostitutes in the hope of getting rich and bringing prosperity to the town which is suffering due to him destroying the local dam when he was younger. Fong-Tin’s plan is to derail the Millionaires’ Express so that its passengers will be forced to spend time and money in the town, helping it blossom. However, fireman turned police chief Tsao Cheuk Kin (Yuen Biao) and CIA agent Fook Loi (Kenny Bee) are on to Fong-Tin and want to put him behind bars.

As these plots and characters, on top of many others, convene in the town, chaos ensues.

The vast range of characters and often episodic comedy-skit nature of the scenes sound like a recipe for disaster, but somehow it all works a charm. Though many of the side plots and characters are hardly vital to the central narrative, Sammo and screenwriter Keith Wong manage to keep a good handle on it all and the threads are intertwined often enough to keep the film cohesive.

The scale and chaos of it all helps keep the film consistently entertaining too. Hollywood equivalents would be It’s a Mad, Mad, Mad, Mad World or Cannonball Run, though I’d argue this is the better film.

Yes, the humour is rather lowbrow and often dated in how it pokes fun at people’s weight and physical impairments in places, but if you can accept this was the norm in Hong Kong at the time, the film can be very funny. I love the room number 5 scene, for instance, which just keeps escalating and escalating in its bed-hopping/unwanted intruder antics. It’s all silly stuff with a hint of Carry On and Benny Hill, but I found it hilarious.

You’ve also got the comedic talents of the likes of Eric Tsang and Richard Ng in the cast, who are always a lot of fun to watch, even if their brand of humour is very broad.

It’s not a straight-up comedy though. There’s still plenty of action in Millionaires’ Express and it’s incredible. There are so many big-name martial artists in the cast list, including Sammo Kam-Bo Hung, Biao Yuen, Cynthia Rothrock, Dick Wei, Ching-Ying Lam, Jang-Lee Hwang, Yasuaki Kurata and Yukari Ôshima, so you know you’re in for something special.

Norton and Rothrock were both injured coming into the film but it doesn’t show. The latter has a memorably high-impact brawl with Sammo. The director/star also gets to fight with his ‘little brother’ Yuen Biao, which is surprisingly quite rare, despite them being in many films together. It’s a doozy too, with both stars displaying the acrobatic skills and abilities to take wince-inducing falls they learnt in Peking Opera school. Yuen also performs a death-defying jump from a burning building and gets an incredible fight with Dick Wei, which involves some mind-bogglingly impressive use of bannisters and railings.

On top of being hugely entertaining, Millionaires’ Express is also very well made for a Hong Kong action-comedy. Produced on a grand scale, with a snowy introduction shot in Canada and other exteriors shot in Thailand, Sammo puts the money on the screen with epic sequences involving horses and trains. The lighting can be very atmospheric too, in the set-bound sequences.

So, with a heavy emphasis on comedy, your mileage will depend on your tastes for the daft, bawdy humour of 80s Hong Kong cinema but I’ve always found it incredibly entertaining. With an epic scale, countless stars and some stunning martial arts and stunts, it’s a real treat for fans of Sammo, the genre and era.

Millionaires’ Express is out on 26th July on Blu-Ray in the UK, released by Eureka as part of their Eureka Classics series. The picture quality is superb, looking sharp and richly detailed and coloured. I’ve used screengrabs throughout this review to give an idea of what it looks like. You get a variety of audio options too (see below).

I must admit, I’m not usually as excited as others about getting extra versions of films, but here it’s worthwhile because it’s not a simple case of one version having bits cut out or added. There are scenes in the theatrical cut that aren’t in the extended cut and vice versa. I wasn’t quite clear on what’s different about the English language cut though (other than it clearly missing some sequences, running the shortest of the cuts).

What’s special here though is the ‘hybrid cut’, which is a great idea, fusing the versions together to get the ‘fullest’ cut of the film available. It may not be as Sammo intended, but it’s great for fans to see all available scenes together as one film. I watched this version on top of the extended cut (I didn’t have time to watch all 4 and I’ve seen the theatrical cut in the past) and really enjoyed it. Most notably, the hybrid cut adds more scenes with the prostitutes that were missing from the extended cut, including a fairly vital introduction. There’s some more added action in the finale too and the extra scenes don’t affect the fast pace of the film, so I actually found it to be the best cut of the bunch.

If you’re wondering about the difference in running times, here’s a breakdown (rounded to the nearest minute according to my Blu-ray player):

Djeng’s solo commentary is very good. As usual for his tracks, it’s dense with background information on those involved as well as setting some of the more perplexing and hidden gags in cultural context.

Cynthia Rothrock does a scene-specific commentary with Frank Djeng too. It runs for 17 mins, basically over the film’s final act. It’s a fun track that maybe doesn’t add a lot on top of Cynthia’s other contributions on the disc but it’s always a pleasure to hear from her.

The Mike Leeder and Arne Venema commentary on the extended cut is more light-hearted. It’s a fun listen, even if it offers less facts and anecdotes than Djeng’s solo track. They clearly have a great love for the film as they spend a lot of the commentary simply laughing along with it, though they do poke fun at a lot of the dafter, more dated elements.

Yuen Biao’s interview, which originally appeared on the old Hong Kong Legends DVD, is very enjoyable. I find him such a likeable person on and off-screen and he cheerfully recollects his time working on the film.

There are three Cynthia Rothrock interviews, one an archive piece from the HKL DVD, a new one recorded for this release and also a video presumably made for her website or YouTube channel. It’s fascinating to hear about her beginnings and extensive career in martial arts and filmmaking. She seems like a genuinely nice person too, who shares warm but honest recollections of her time on the film. There’s a lot of crossover between the interviews though, so I’m not sure they’re all needed. The web video is slightly unique, in that it gets a little more detailed in describing her martial arts techniques.

Yukari Oshima happily describes her time making the film too. It was her debut feature as an actress in Hong Kong and she had always wanted to work with Yuen Biao, so the role was a dream come true. It also led to a fruitful career, so she speaks fondly of the experience.

Sammo’s interviews are great too. Unlike some of the other archive interviews with him on prior Eureka releases, he focuses more closely on the production of the film itself, which makes a nice change. There’s only so many times I need to hear about his past. I enjoyed hearing about his love of the western genre too, a sentiment I very much share.

Also included as a special unlisted extra is a behind-the-scenes featurette for the making of My Lucky Stars! It was supposed to be on the Lucky Stars 3-Film Collection but was missed off for a technical reason.

And, of course, you get one of Eureka’s usual booklets, which has an informative essay on the film’s production.

So, a thoroughly extensive package for a wonderfully entertaining film. You can’t go wrong picking this one up.