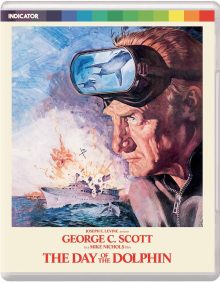 Anyone who knows a little about Mike Nichols, one of Hollywood’s supreme director of actors and purveyor behind the classic 60s character dramas Who’s Afraid of Virginia Woolf and The Graduate, as well as heartwarming comedies such as Working Girl and The Birdcage, might be surprised to find that he has also directed a film featuring talking dolphins. Yep, you read that right. Yet you’d be forgiven for not knowing, however. The Day of the Dolphin, a little seen 1973 curio starring the indomitable George C. Scott, was virtually written off by Nichols himself, being the second film in a string of failures that drove the director away from Hollywood for almost a decade. Yet will a new Blu Ray edition of the film, released this month by Indicator, shed a revealing light on a long lost classic, or was Nichols right in wanting it struck off from his filmography?

Judging by the subject matter, it is not surprising to find out that Nichols never actually wanted to make the film in the first place. For a director whose work so often centred on the intimate whirlwind of human relationships, a film revolving around a shady conspiracy and talking dolphins probably wasn’t high on his list of potential projects. Yet Nichols was tied into a contract with Producer Joe Levine, to whom he owed one more film. Desperate to escape the contract, The Day of the Dolphin seemed to offer the quickest route to freedom. Reluctantly, Nichols took on the project but was so disinterested that he put no effort into pre-production, lost interest half way through filming and hardly seemed to set foot in an editing room afterwards. For a film with such a difficult and apparently rudderless production, The Day of the Dolphin should have been doomed to failure. 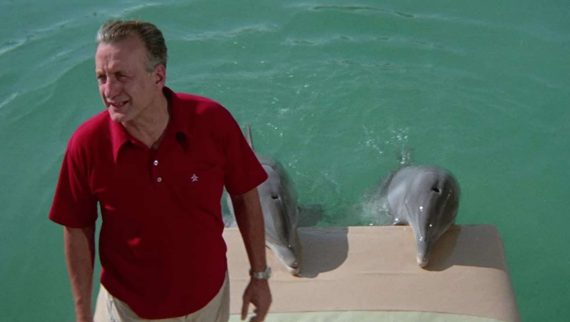 The plot certainly doesn’t seem to offer any rays of hope, coming across more like a bizarre B-movie that a project destined to be tackled by a major Hollywood director. George C. Scott plays Jake Terrell, a scientist who has been training dolphins to speak to humans. When the company who have been funding his work get wind of his experiments, Jake soon finds himself caught up in a sinister conspiracy that threatens not only the US president, but the very creatures he has trained and come to love.

Adapted from Robert Merle’s novel, Nichols’ collaborator and screenwriter Buck Henry stripped out some of the novel’s more outlandish elements (such as having the dolphins being so fluent in English they could discuss philosophy) and actually delivers a fairly streamlined, straightforward screenplay. In fact, considering the subject matter, perhaps the most remarkable thing about The Day of the Dolphin is how seriously it treats its outrageous plot. Both Nichols and the cast tackle the story with completely straight faces, which proves to be masterstroke. Instead of being distanced by the ridiculousness of the narrative, you instead find yourself being drawn in.

The biggest contributors to this unexpected success are surely the dolphins themselves. Despite sounding like they have swallowed Ralph Wiggum (their voice was actually provided by Buck Henry, under heavy electronic processing) their interactions with the cast are powerfully convincing. In an era when convincing CGI was still two decades away, the effort taken to ensure that the animal ‘performances’ in The Day of the Dolphin are never less than brilliant must have been intense to say the least, but there is no doubt that it pays off (and for anyone concerned, the American Humane Association passed the film with flying colours). By the time the movie ends, you have become as attached to the dolphins as much as, if not more so, than the human characters.

But of course that is not to disparage the human performers in the film. George C. Scott was one of those actors who seemed incapable of delivering a bad performance, and his work here is as great as ever, imbuing his character with conviction, drive and a subtle sense of pathos. An early role for Paul Savino also stands out, evoking a similar sense of threatening affability that he displayed as Paulie in Goodfellas. In fact, each member of the cast commits to the story the with the same admirable sense of duty as Nichols and Henry.

As the film progresses, you slowly realise that what you are watching here is not an over the top B-movie but an ecological thriller that is suffused with an almost melancholy tone. With its plot featuring shady government agents, conspiracies and untrustworthy characters in positions of power, The Day of the Dolphin is in fact very much a part of the post Watergate paranoid thriller genre that dominated Hollywood in the early and mid Seventies. This unexpected sophistication infuses other elements of the production. The cinematography by William A. Fraker (the DP behind Bullitt and One Flew over the Cuckoo’s Nest) is beautiful, especially as he captures Dolphins twisting and swirling with divers underwater. When that is combined with Georges Delerue’s Oscar nominated score, the film achieves a lyrical beauty that feels a million miles away from its pulpy premise.

Yet The Day of the Dolphin can never fully escape that premise. Not matter the seriousness and commitment from cast and crew, this is still essentially a film about strapping bombs to talking dolphins. Despite some more contemporary grounded elements weaving their way into the plot, the film can never escape the faint air of the ridiculous. Coupled with a pace that seriously takes its time to get going (the key plot doesn’t really kick in until at least an hour) and several frustrating plot holes, The Day of the Dolphin feels like a film straining towards something that is greater than the sum of its parts but never quite gets there.

What is interesting when watching the extras, however, is how the film’s ardent fans fell in love with it when watching the movie as children. Despite the tone of the film feeling like it has been made for adults, perhaps it works best when viewed as an animal adventure story designed for kids. The very fact that The Day of the Dolphin can work as a slow burn paranoid thriller, a Saturday morning animal  adventure or an ecological exploration of man’s exploitation of animals proves to be one of its greatest achievements and, if judging the film’s original marketing campaign, its Achilles Heel.

Ultimately, as it is certainly an outlier in Nichols’ filmography that bears almost none of his familiar hallmarks, The Day of the Dolphin may not appeal to fans of the director. Yet as an unfairly forgotten curio that feels very much a part of the paranoid, melancholy Hollywood that dominated the early Seventies, it is very much due a reappraisal and a new audience; something that this new Blu Ray edition will hopefully help bring to fruition.

The Day of the Dolphin is released on Blu Ray via Powerhouse Films on their Indicator label on 26th July. For the most part, the picture, from a new 4K restoration, looks great, with a rich, deep contrast and crisp, detailed picture. There are a few instances of print damage here and there, as well as a few shots that are very soft, but this is clearly the best source that Indicator had to hand. Overall, it is a fine presentation of the film. Audio comes in a original 2.0 Stereo track or 3.o channel DTS track. I watched the film with the original stereo track and it sounded great.

Selected Scenes commentary: Film Historian Sheldon Hall spends 40 or so minutes discussing the film over selected scenes, which are weighted towards the first half of the movie. He discusses the background to the production, the difficulties of marketing it, as well as examining Nichols’ dislike for the finished article. As a fan of the film, he also provides some great personal details in explaining why the film means so much to him, as well offering interesting analysis of key opening scenes.

Interview with Jon Korkes: Jon Korkes spends forty minutes discussing his time on the film and his career. He explains how shooting Day of the Dolphin proved to be a great experience and how he actually fell in love during the production. He gives some fascinating insights to working with the dolphins, as well as offering some riveting and candid stories about working with George C. Scott.

Interview with Michael Haley: The 2nd AD on The Day of the Dolphin gives us another forty minute interview (looking like this one was held over Zoom) going into great detail about his career working with Mike Nichols. He proves to be an anecdote factory, offering stories about everyone from Scorsese to Scott to Nichols himself. Like Jon Korkes, this is an open, interesting and candid take on the film and its production. A great watch.

Archival Interviews: There are three older interviews included on the disc from Screenwriter Buck Henry and actors Ed Herman and Leslie Charleson. While Herman and Charleson provide a few interesting nuggets about working with Nichols and George C. Scott, the star here is the interview with Henry, which is honest, hilarious and humble in equal measure.

Trailer Commentary: Larry Karaszewski from Trailers from Hell provides a naturally short but interesting appraisal of the film. Like Sheldon Hall, he saw the film as a child and it has remained with him ever since.

The rest of the package is rounded out with some radio spots, a gallery of promotional material and one of Indicator’s peerless booklets. The booklet contains a great critical appraisal by critic Neil Sinyard, which cleverly links The Day of the Dolphin to more modern films like The Shape of Water, excerpts from various interviews focusing on Producer Joe Levine and Mike Nichols with contextualising notes, excerpts from an interview with Trish Van Devere offering brief insights into her relationship with George C. Scott, some textual examples and analysis of how the novel differs from the film as well as selections of contemporary reviews.