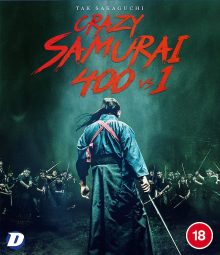 When I first became aware of Crazy Samurai: 400 vs 1 (a.k.a. Crazy Samurai Musashi), I knew I had to see it. Famous for its 77-minute central action scene which contains no (visible) cuts, the film has been rather divisive among critics and audiences alike. I’m a sucker for samurai movies though and, particularly due to being involved in filmmaking myself, I was keen to see how director Yûji Shimomura, star Tak Sakaguchi and the rest of their team managed to pull off this extraordinary feat.

Crazy Samurai: 400 vs 1 centres around the legendary samurai Musashi Miyamoto (Sakaguchi). He was a real-life figure and reportedly had an undefeated record of 61 duels to his name. The film is a huge exaggeration of his skill though and not based on any historical record of the man.

Instead, the film crafts a story that sees Musashi return to the home of the Yoshioka family after having defeated their master Seijuro and his younger brother Denshichiro in previous duels. To save face, the Yoshioka family have challenged him to another duel but have 100 clan members and 300 mercenaries in the wings to take Musashi down (a lot of the film’s reviews and articles state he kills 588 enemies, so I’m not sure where the rest come from). They didn’t count on the samurai’s skill and resilience though, as Musashi slices his way through an endless wave of opponents. 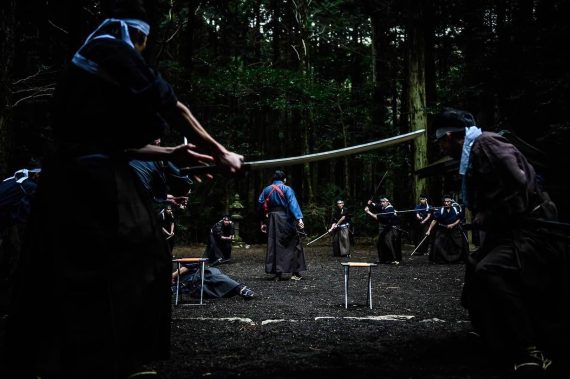 Other than a coda set a few years later, that’s it to Crazy Samurai: 400 vs 1. Though notable for its technically impressive long-take approach, in essence, the film is as stripped back as you get. It’s just pure action from start to finish, other than a brief (standardly shot and edited) introduction, the aforementioned coda and a couple of moments where Musashi catches his breath and has a drink. Dialogue is kept to a minimum too and music is used sparsely.

This minimalist approach is what makes the film special, but it’s also what makes Shimomura’s experiment somewhat of a failure. With very little plot, no character development and a never-ending stream of faceless opponents, the film lacks drama. The audience is never invested in who’s fighting, so doesn’t care who wins. As such, rather than being an exciting experience, it gets pretty tedious.

The first 10 minutes of the ‘single-take’ fight scene are a particular challenge, as it takes a while to attune to the stripped-back approach, the woodland setting is a bit bland and the opponents are kept low-grade. Due to the nature of the way the film was shot and the fact that so many people are despatched, Sakaguchi’s moves are kept simple and swift too. Whilst this is likely more close to the reality of fighting with razor-sharp swords, it means the action seems pretty bland from the offset. Sakaguchi often uses the same handful of moves again and again too, though you can’t expect anyone to memorize totally varied, complex fight choreography over 77-minutes. 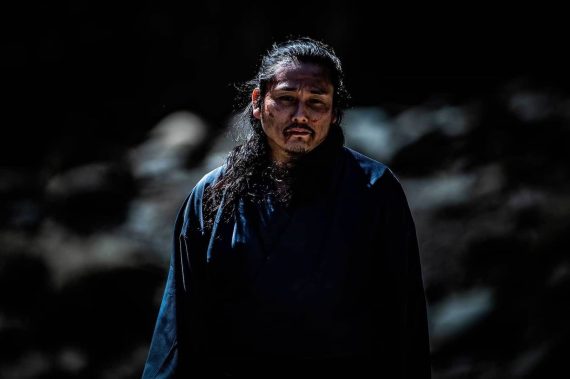 After the rocky, over-extended start to the action sequence though, I eventually warmed to the style. Musashi and the camera gradually move out of the woods and through the Yoshioka family compound, making for more varied locations. Some more skilful opponents crop up here and there too, to allow for a couple of higher-stake duels. Musashi also takes little breathers here and there throughout the film that give the audience a rest as much as him. A couple of short non-action sequences within the long take also offer a little variation.

However, the monotony of the constant sword fighting still gets too much, despite Shimomura’s efforts to change things up at regular intervals. The climactic sunset duel, though offering a rare chance for some nice lighting (elsewhere the film looks pretty bland), is particularly overplayed and dull by the end.

There are some other minor niggles, such as the fact that almost every opponent manages to stumble or roll completely out of shot, their bodies mysteriously disappearing when the camera swings around/moves over. Obviously, they needed to get out of the way of the camera crew and actors or needed to re-enter the scene as new enemies to kill, but it does feel rather artificial. The sword slashes don’t appear all that believably deadly either, utilising only quick squirts of CGI blood to suggest any impact. Any more realistic practical effects would have been risky to pull off in the long-take approach though and you can’t expect elaborate CGI effects on all 400 (or 588) kills in a relatively low-budget film. 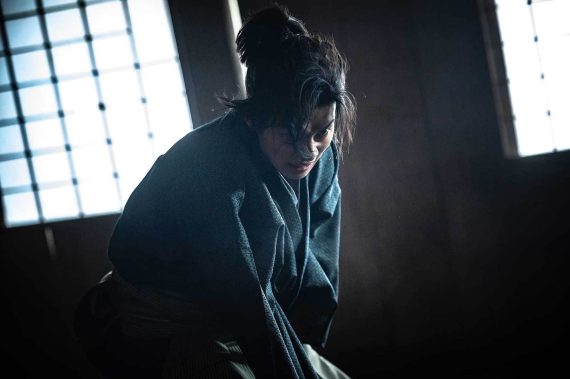 I did appreciate how visibly exhausted Sakaguchi became though, as it added a layer of realism to proceedings on top of reminding the audience how tough it must have been for him to shoot.

Overall then, Crazy Samurai: 400 vs 1 is an impressive and unique experiment, but ultimately it doesn’t work as a film. It certainly has its moments but in taking its bold, stripped-back approach it sacrifices the fundamental drama required to sustain interest.

Dazzler Media presents Crazy Samurai: 400 vs 1 on Blu-ray, DVD & Digital 5th July. I was only sent an online screener so I can’t comment on the picture and sound quality.

There are no special features listed on the discs, unfortunately.