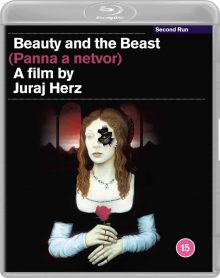 Many of the Czechoslovakian directors who flourished in the new wave brought on by the Prague Spring soon found themselves struggling to maintain a career after the state began to take greater control over national film production. Juraj Herz, however, who had troubled the authorities with films like The Cremator and Morgiana, managed to maintain a healthy career in the industry. He found that he could still make quite bold and interesting films by working in the fantasy genre. The authorities naively viewed fantasy films as simple entertainment made for children that were never viewed as ‘realistic’, so couldn’t house any clear criticisms of the state. Therefore, Herz and a few contemporaries were able to make bold and interesting work under the shroud of fantasy without much interference.

One such film Herz made was Beauty and the Beast (a.k.a. Panna a netvor or The Virgin and the Monster, it’s literal translation). Based on the classic fairy tale by Jeanne-Marie Leprince de Beaumont (who herself had adapted it from a longer version), it’s one of many versions but Herz ensured it had its own distinct style to set it apart from the rest.

Those great purveyors of Czechoslovakian cinema, Second Run, are releasing Beauty and the Beast on Blu-ray this month, so I thought I’d give it a look. 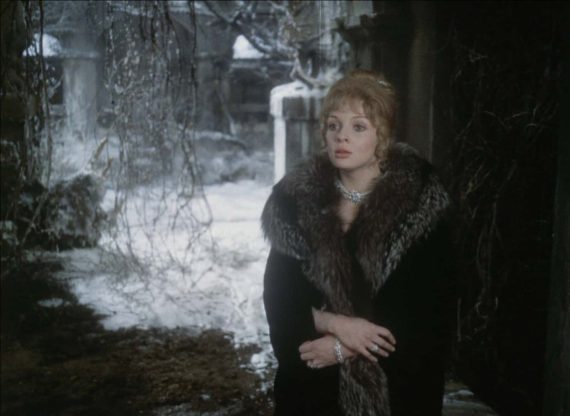 The general plot is fairly similar to the classic Beauty and the Beast tale, but I’ll restate it, in case you’ve somehow avoided the numerous adaptations and the fairy story itself.

Rather than Belle, we have Julie (Zdena Studenková) as our protagonist. She’s a young woman living with her father Otec (Václav Voska) and two greedy step-sisters (Jana Brejchová and Zuzana Kocúriková), who are both preparing to get married.

Unfortunately, a caravan of carts carrying most of Otec’s most valuable possessions, meant as dowries and crockery for the celebrations, gets lost/destroyed on the journey over, meaning the family are left penniless.

Otec is forced to sell most of his worldly possessions to get by and the last item of any value he has leftover is a portrait of his former wife, Julie’s mother. He heads out towards town one night but gets stuck out in the wilderness and decides to take shelter in a decrepit nearby mansion. 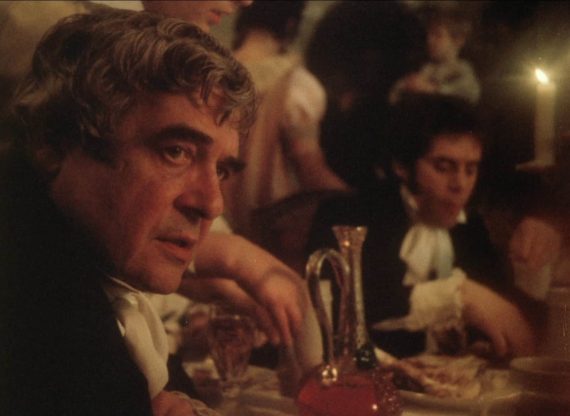 In the mansion, he is given a warm welcome of food and riches, by an unseen host. He takes this gladly and gives thanks but, on his way out, Otec takes a single rose for Julia on his return. This angers his host, who reveals himself to be the beast of the title (played by Vlastimil Harapes). He tells Otec he can return home to get his affairs in order but must come swiftly back and remain a prisoner in the mansion for the rest of his life. The only way he can avoid this fate is if one of his daughters volunteers to take his place.

Being a doting, loving daughter, Julie rushes over to the mansion as soon as her father mentions this clause and takes his place as the beast’s prisoner.

Whilst spending her lonely days there, Julie gradually falls in love with the beast, who won’t show his face to her but visits her each night, talking to her from a distance, in the shadows. He falls for her too, but daren’t let her see his face, not only because she might be frightened off, but because it may cause him to lose his beast form. The beast also fights off his primal urges to kill Julie, as his inner demons vocally suggest he do. 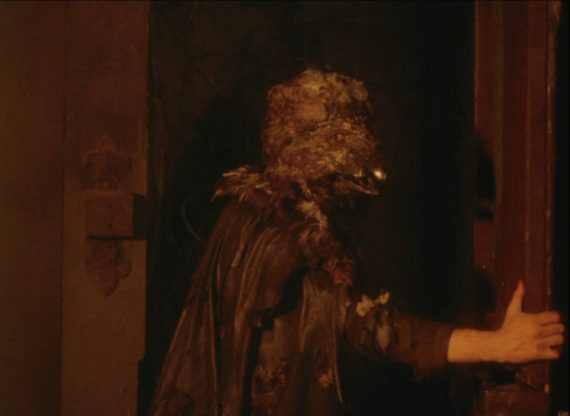 I’m ashamed to admit, of the three most famous adaptations of the Beauty and the Beast tale, Jean Cocteau’s La belle et la bête and the two Disney adaptations, I’ve only seen the latter pair. So I can’t compare all of these to Herz’s take on the material but I can safely say that this 1978 version is vastly different to the Disney films.

From the offset, you have a scene right out of a horror movie, where we follow the caravan at night and hear a woman warn the drivers that the road is cursed. Even the seemingly joyful wedding preparation scenes that soon follow (after the beautifully rendered and equally creepy credit sequence) are filled with blood and graphic butchery.

Herz clearly wants to present a darker, more grittily ‘realistic’ spin on the fairy tale. This may seem an odd approach to material thought to be a children’s story but, in fact, if you look back at most original fairy tales, they were very dark and grim (no pun intended). It’s largely Disney who are to blame for dressing fairy tales in a sickly, saccharine coat. 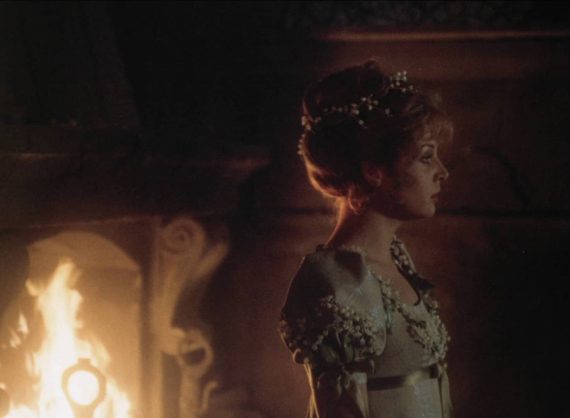 I also got the feeling Herz was keen to make a straight-up horror film but likely wasn’t allowed, as the genre was frowned upon by the Soviet authorities, which is why so few horror films were made in the USSR and other related states. The studio was reportedly angry at Herz after the film was released, as they asked for a fairy tale and, instead, got a horror movie. There were tales of children crying and fleeing from screenings, in fact.

Though not a lot has changed from the original story, this more frightening approach was achieved through an altogether more Gothic tone. The stunning production design plays a key part in this. Supposedly, it took 3 months to build the elaborate sets, making use of Barrandov’s biggest studio space. They were so expensive, the studio requested Herz make two films at once on the same sets, to better justify the cost. Thankfully, Herz had a suitable script for The Ninth Heart to hand and did as they asked. He reportedly shot Beauty in the mornings and The Ninth Heart in the afternoons. How he managed this and still came out with such a good film (probably two, but I haven’t seen The Ninth Heart) is a testament to his skill as a director. 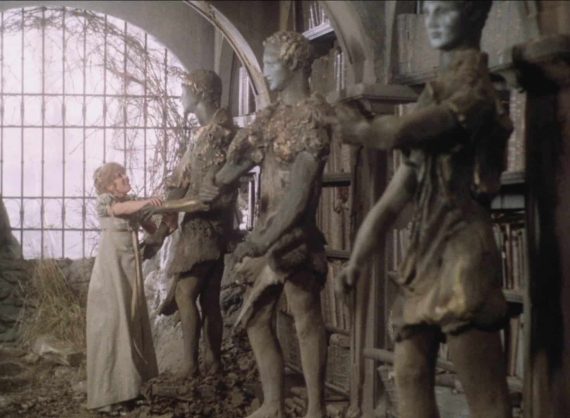 The film has a much more frightening monster than other versions of the story too, with a bird-like appearance instead of the usual cuddly lion-like character. There’s an artificial, theatrical look to Herz’ monster that some might scoff at, particularly when Harapes glides and almost dances around the set (the actor, indeed, was a ballet dancer and choreographer). The actor overdoes the movement perhaps, but it fits the gothic fairy tale style.

Also, instead of the cheerful, eager-to-serve living ornaments and crockery of Disney’s films, this version of Beauty and the Beast has a creepy imp servant that descends from the chandelier or lurks behind the fireplace. He looks as monstrous as the beast himself.

Though I loved the atmosphere Herz and his crew created, I wouldn’t say I was totally won over by the film, overall. The first half had me enthralled, but I felt the second half, once Julie is kept prisoner and the love story begins, was a little less successful. There’s a wonderfully dramatic climax, when the beast’s frustrations ignite (literally, as he begins to set fire to his mansion) but then this is followed by a corny, happy ending that seems out of place. It’s in keeping with the original, I guess, but it felt rather clunky here. 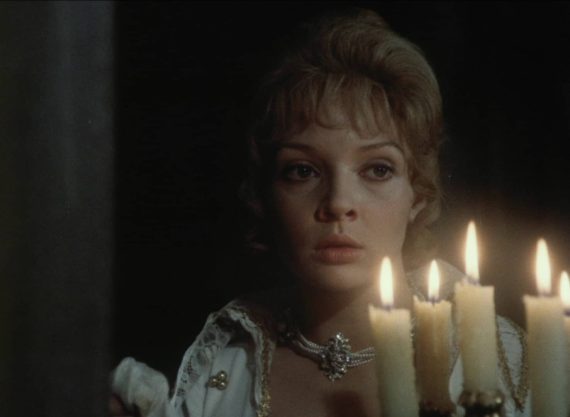 I liked how many of the details of the story are unexplained or skimmed over though. How did he become a beast is a key one. Herz either assumes we all know the story or wants to add an air of mystery, which works a treat and keeps the film tighter, through avoiding exposition or flashback scenes.

Overall, though it runs out of steam a little as it goes on, Herz’s version of the classic fairy tale offers a wonderfully atmospheric and gothic spin on the material. Those who might not be interested in watching another version of Beauty and the Beast needn’t worry, as they’ve certainly never seen it look like this.

Beauty and the Beast is out on 26th July on region-free Blu-ray, released by Second Run. The picture quality is a little disappointing. There are quite a lot of flecks and scratches on the picture, most notably. It has a slightly murky look too, but I imagine this is as intended, as it suits the style. Otherwise, it looks fairly pleasing, with a consistent look and fairly detailed, if not pin-sharp, textures. I’ve used screen grabs in my review to give you an idea of what it looks like.

There’s some crackle/hiss on the audio too, so it’s not a pristine presentation, unfortunately.

– Beauty and the Beast (Panna a netvor, 1978) presented complete and uncut from a new HD transfer from original materials by the Czech National Film Archive.
– A newly-recorded Projection Booth audio commentary with Mike White, Samm Deighan and Kat Ellinger.
– František Hrubín (1964): a short film on the Czech writer and poet, and co\-screenwriter of Beauty and the Beast.
– 20-page booklet with new writing on the film by author Jonathan Owen.
– New and improved English subtitle translation.
– Reversible sleeve with the alternative title, ‘The Virgin and the Monster’
– Region free Blu-ray

I’m a big fan of the Projection Booth commentaries and the team doesn’t disappoint here. As usual, their love and great knowledge of Czech cinema shine through and they offer plenty of background information and interesting interpretations of the film.

The short film mixes nostalgic recollections of youth with slightly surreal stylistic flourishes, a blend I enjoyed quite a lot.

As usual, Second Run’s booklet is a must-read, offering some background on Herz and the film, as well as breaking down the film and its themes in great detail.

So, though not loaded with extras and featuring a less-than-stellar print, it’s a decent package overall and I’d still recommend it to fans of Czechoslovakian cinema and gothic fantasy/horror.