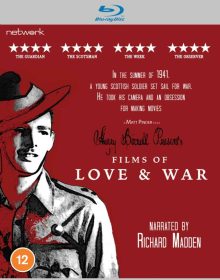 There goes Grandad. Loves films he does and never seems to have the camera out of his hand.

The lives of our parents and grandparents are often shrouded in mystery. Sure, we have seen pictures of them with long hair or making very questionable fashion choices. But who they were as people, or the experiences that made them who them who they are, are rarely discussed. Imagine then, upon the death of your beloved grandfather, being left a note detailing that, in huge storage trunks in the shed in the garden, there was a filmic record of many aspects of your life. Accompanying this were many handwritten journals that tell the story and emotions behind the images. The pain, the joy and the fears.

This is the story of Carina Birrell, the granddaughter of Harry, an amateur Scottish filmmaker who was given a cine camera at any early age. Armed with his love for cinema and a keen eye for film, he documented the mundane of his life as much as the extraordinary. Like many of us, there are visual records of holiday trips to Blackwater Foot and London (of which he had a profound fondness for). What is extraordinary about these, though is the time in which they are set. Visual records of this type from the late thirties and early forties are usually the remit of the BFI but family pictures of the seaside or day trips wouldn’t make for that interesting a release. Thankfully, Mr Birrell filmed many extraordinary events to balance out the awkward glances of family and friends who have been caught by the camera.

Harry was an early enlister for the Second World War and took his camera with him on his travels around the world with the British Army. He even got the British Army to furnish him with film stock with which to capture the terrain and help map the world. Information was king and Harry’s role was to produce as much of it as he could. There is even a wonderful tale recanted that he managed to convince the army to buy him colour film stock as he could determine the difference between real and fake foliage by the colour of the shrubbery.

But while there are stories about battles or close brushes with death, it is in the relationships between people that the film really shines. Birrell’s time with the Gurkhas was one he treasured greatly. He led a battalion of men through Burma during a time where there was the threat of being overrun by the Japanese army ‘s spread across the region.

It is not all footage from the reels though, as we are treated to the Birrell family and friends discussing their views of the footage intermixed with their own memories. Richard Madden provides a measured narration of the words in the diaries. It is presented like a living record of that period and works wonderfully in portraying this.

Interviews with Anne, Johnny and Judy Birrell
Granddaughter Carina interviews each of the children of Harry Birrell to ask about their knowledge of the events found in what he has left behind. None of the interviews are very long but there is an expected warmth in their stories that brings much of the humanity out of the man.

Four Short Films from the Archives
London Diary (1939)
A record of some holidays and breaks with friends to not only London but Blackwater Foot as well.
Officer Cadet Training Camp (1940)
Some footage of an early soldier training camp which shows much of the joviality and youth that was soon to be sent into battle.
Around Tamu (1944)
The people and surroundings of his time in Tamu, in Burma. There is a sense of how much Harry liked spending his time there.
When We Are Young (1959)

When I finished the main feature, I was left feeling unusually sated. Often, I am hungry to learn more about the filmmaking process or the themes that have been introduced but I was not sure how they could add to the main event. They have supplemented it with subtlety, letting the family members speak for the man himself and his reluctance to talk about the events in the film in addition to living with such an ardent cinephile.
There are also some of his films showcased in their entirety. You can see Birrell’s talent evolve in not only filmmaking but in his editing and presentation. None of these add too much to the footage already shown but it is welcome to see the raw footage in its original state with some additional sound tracking.

In conclusion, this is sold as an alternative presentation of some notable events in history. This is something that it achieves with some aplomb and is an easy watch that will have you pondering about the human aspect of many of the things that happen throughout. There is also little doubt that you may revisit some old family footage and see it in a new light.