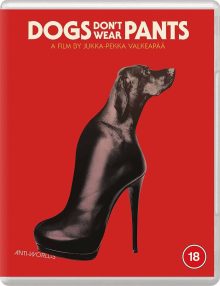 Valkeapää liked the concept but felt the original script wasn’t working, so spent a long time developing it. His hard work paid off though, as Dogs Don’t Wear Pants, after an expectedly mixed reception at its premiere at the Director’s Fortnight at Cannes, went on to enjoy a successful festival run and critical praise around the world. A screening at London Film Festival went down particularly well and the film gained a high profile fan in the shape of Mark Kermode.

Dogs Don’t Wear Pants is now being released on Blu-ray by Anti-Worlds. Intrigued by what I’d heard of the film, I got hold of a screener and my thoughts follow.

Dogs Don’t Wear Pants sees Pekka Strang (best known for his lead role in Tom of Finland) play Juha, a man who loses his wife in a drowning accident, leaving him to bring up their four-year-old daughter Elli (Ellen Karppo) by himself.

We then swiftly move forward several years. Elli is now a teenager (and played by Ilona Huhta) and Juha is a shell of his former self. Disconnected from the rest of the world, he drifts along, keeping to safe, rigid patterns of behaviour at work and home. He’s becoming distant from Elli too, often communicating via notes due to his unsociable working hours (he’s a heart surgeon).

Juha finds that the practice of asphyxiation brings on vivid memories of his wife as she was drowning (he went in the water to try to save her and nearly drowned himself). So, he becomes obsessed with Mona and her ‘talents’. Things are taken too far though, so Mona refuses to accept him as a client anymore. Juha can’t handle this and continues to stalk her, begging to be allowed one more session.

As the synopsis might suggest, Dogs Don’t Wear Pants takes the extreme world of BDSM and uses it to tell a rather poignant story of loss. It’s a fascinating film that has enough shocking material for an attention-grabbing trailer (see below) but is equally quite subtle and moving. It’s quite a balancing act, as we are drawn into the story of this tragic central figure, who’s drifting apart from his teenage daughter, yet the film is full of eye-opening, squirm-inducing scenes of sadomasochism and strangulation. There’s even a horrific tooth-related scene that gives Marathon Man a run for its money.

Helping ease the tension between the seemingly disparate sides of this stylishly shot film is an underlying sense of humour. Reportedly the original script was very bleak and dark, but one major change Valkeapää made was to inject comedy into the story.

I’d hardly call Dogs Don’t Wear Pants a laugh-riot and I’m not sure I totally buy into Valkeapää’s claims that it’s a romantic comedy, but there’s just the right amount of dry humour to prevent the grimmer aspects of the film from taking over. Even the aforementioned dental sequence contains a couple of gags to keep it from becoming utterly sickening.

Dogs Don’t Wear Pants, then, is an unusual, strangely touching film about grief and rediscovery. Sensitively approaching extreme subject matter without judging, poking fun or exploiting it, the film is maturely directed. It won’t be for everyone and it’s hardly a date movie but, if you’ve got an open mind, there is much to admire and appreciate.

Dogs Don’t Wear Pants is out on 7th June on Blu-Ray in the UK, released by Anti-Worlds. The picture quality is pristine, handling the deep blacks and neon colours beautifully. The audio is exceptional too.

There are also plenty of special features included in the package:

Though the decision to record the commentary in English means Valkeapää’s delivery is a little slow and stilted, it still contains enough dry humour and interesting tidbits about the film to remain engaging.

The interviews with Valkeapää, Krista Kosonon and Pekka Strang are also very informative and engaging. The director repeats some information from the commentary, but there is still enough new material to make his interview worth a watch.

The shorter Kermode interview isn’t particularly insightful but it’s entertaining as the pair don’t take things too seriously. They have a bit of an argument about the merits and flaws of Forrest Gump, for instance.

The storyboards are a nice addition, for those interested in the visual aesthetics of the film.

I didn’t get a copy of the booklet to look at, unfortunately, but if Anti-Worlds’ sister company Indicator is anything to go by, it will be a fabulous addition to the set.

Definitely worth a purchase then, if you think the film sounds intriguing.