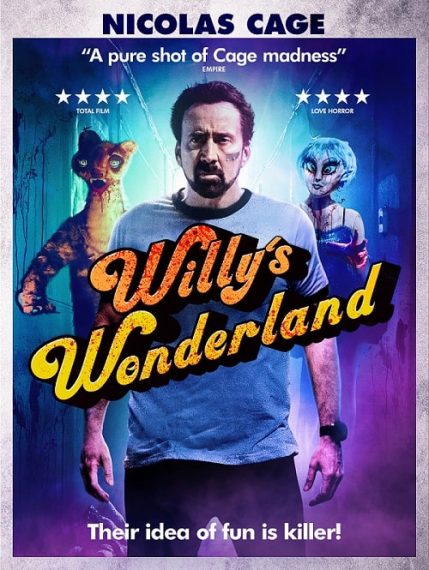 Nic Cage is showing no signs of slowing down and his eclectic range of movies continues to grow, he seemingly always wanting to try something different or push the creative edge (for better or worse!). While this may not reach to heady creative heights of say recent hits (and fanboy favourites!) Mandy and Colour Out of Space, Willy’s Wonderland is nevertheless a gory, over-the-top, wild ride ala Cage.

He plays the possibly mute (Cage has no dialogue here) man-with-no-name who when his car breaks down is offered the job of staying the night at Willy’s Wonderland to clean it up in return for his car being fixed. Now referred to as The Janitor, he gets to work cleaning the place up along with taking regular breaks to chug his favourite pop and play pinball. However, there is a catch, (and he should have known this when the job was given to him by a character named Tex Macadoo!!): Willy’s is home to murderous satanic animatronic creatures that come alive to feast of human flesh, meaning The Janitor must now do battle with them in order to survive the night.

And that’s the flick in a nutshell: Cage vs giant come-to-life murderous puppets. Well, there is some shoe-horned in youngsters who break in with their own agenda to destroy Willy’s but mainly they’re just there to provide extra fodder for the puppets, a bit of levity and one too many exposition dumps to explain why what is happening, is happening. Otherwise, it is Cage doing battle with puppets and taking breaks to chug some soda. On those unpretentious terms, it works. It’s gory, it’s daft, doesn’t always make sense but there’s plenty of gore, funky music, freaky looking animatronics being ripped apart, and Cage posing like the cool motherfucker that he is.

It stays just the right side of trying too hard (mainly down to Cage’s charisma and enthusiasm for genre fare like this) and while the momentum doesn’t quite keep up with the crazed concept (the vibe maybe a little too sedate, certainly in the second half, when the craziness  ramps up!) there’s fun to be had if you can go with it. The young cast aren’t bad, genre stalwart Beth Grant has a cool part as a sheriff who knows the secret of Willy’s (read: she’s on hand to dump more exposition!) and Cage carries the whole thing through its budget limitations.

It’s a grungy (they really should have pumped up the colours to make it more of a day-glo nightmare!), gory, goofy ride and a bigger budget would have meant they could have really gone to town with the concept. Still, director Kevin Lewis adds some style to proceedings and brings plenty of grue and absurdity. Probably a film that will split audiences into either the love it or hate camps, but this is a fun slice a Cage genre silliness.

Special features on the disc include: 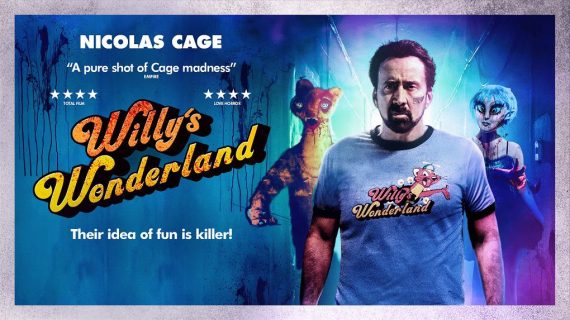