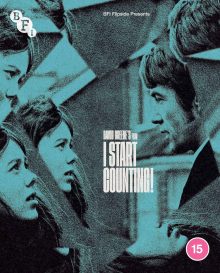 There is a very unique, yet slightly uncomfortable tone set in motion from an early scene in I Start Counting!. Fourteen-year-old Wynne who is played by the sixteen-year-old British actress Jenny Agutter gently walks upstairs and gazes lovingly upon her much older brother George, played by Bryan Marshall. There is an abundance of feelings that start to be revealed very early on. However, this is not just a case of admiration from a younger sister to a brother, Wynne is madly in love with George, and almost seems sure that their relationship will truly blossom at some point in time. But what Wynne soon begins to suspect is that George may also be guilty of a series of murders.

What is quite interesting about the story of I Start Counting! is how many genres it falls into. It is part thriller, Drama, Horror, but most of all in my personal opinion this is mainly a coming-of-age story. Based on the 1966 novel of the same name by Audrey Erskine Lindop, the character of Wynne is where the heart of the story is. Jenny Agutter’s performance of innocence and intrigue really comes across brilliantly. Because of David Greene’s directing, at times it can feel like a dream being in the world of Wynne. No matter what happens, it just seems that her love for George can never be disturbed.

Bryan Marshall as George is charming and confident, and the chemistry between both Wynne and George can at times be almost peaking at the level of awkward. This especially happens during moments when Wynne falls deep into a heavy dose of dreaming. It is within these dreams that I felt the overall movie had some similarity to Park-Chan-wook’s 2013 movie Stoker, but there were also slight tinges of the Giallo genre.

There are also some superb special features included in this release:

Straight away I have to mention the outstanding audio commentary provided by Samm Deighan. She gives such an amazing insight into the entire story of I Start Counting! from the crew, cast, influences, music, real-life serial killers, it’s all here. The wealth of knowledge she provides makes this an absolutely essential listen.

Another favourite feature was Worlds Within Worlds. A decent length interview with Jonny Trunk, founder of Trunk Records. I’ll be honest in saying that I only ever really knew this label from their logo, but it was quickly changed after this interview. Jonny discusses the history of Trunk Records, what the term ‘Libary Music’ means, and the life of the composer of I Start Counting! Basil Kirchin. Since watching this I have spent all week diving into the world of Kirchin. It really is a journey. A brilliant feature about a man who seemed to do what he wanted when it came to music.

The twenty-minute interview with Jenny Agutter is another highlight. She discusses her rise in film, what it was like to be only sixteen, starring in movies such as I Start Counting!, and her overall appreciation for David Greene and others on set.

Chris O’ Neill’s video essay Loss of Innocence tremendously breaks down the character’s profiles and the psychological thought process of Wynne. The excellent essay is guided along with an eerie piece of music provided by Gabbie Bam Bam.

I Start Counting! is a very unique movie for its time and one that definitely deserves the spotlight in 2021. The overall audio and presentation of this release are excellent and the special features alone make this a highly recommended purchase.

I Start Counting! will release on Blu-ray for the first time in the UK on 19 April 2021 through BFI.