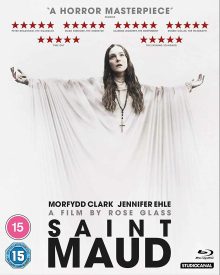 Rose Glass’ feature film debut Saint Maud is a film that was both helped and hindered by the COVID-19 pandemic. After impressing audiences at its premiere in TIFF in autumn 2019 and a few other festivals shortly afterwards, the film was due to be released in the US and UK in April/May 2020. With cinemas around the world closed though, those dates got pushed back. It’s still not been released in the US (IMDB says 29th January in limited cinemas and 12th February online) but in the UK it finally hit the big screen on 9th October. With little competition and very strong reviews, Saint Maud ended up being the surprise hit of the season. OK, it didn’t do blockbuster figures, making close to £900,000, but, for a low budget British horror film released during a pandemic, it did much better than expected.

Flash forward a few months and Studiocanal are releasing Saint Maud on DVD, Blu-ray, Limited Edition steelbook and digital platforms. I didn’t venture out to the cinema to catch the film but the reviews made me eager to see what the fuss was about when it came to Blu-ray. So I got my hands on a copy and my thoughts follow.

Saint Maud sees a young nurse, Maud (Morfydd Clark), begin a new private palliative care job after leaving hospital work due to a traumatic incident. She has been hired to be the home nurse for Amanda (Jennifer Ehle), a former dancer and choreographer who is terminally ill with stage four lymphoma.

Maud has recently deeply devoted herself to Catholicism and sees this new job as part of her ‘calling’. As she learns more about Amanda and her ‘sinful’ ways (she likes to party hard, despite her illness, and is a lesbian), Maud believes she must do more than just care for her. She must save her soul.

Maud’s religious devotion is frighteningly intense though. Not only does she attempt to control Amanda’s life, she has strange orgasmic seizures she believes are signs of God physically within her.

When this alarming behaviour causes Amanda to fire her and send her away, Maud’s faith is tested and she is lost as to what God wants her to do. After some soul-searching, she thinks she’s figured it out though and begins to put her twisted plan into practice. 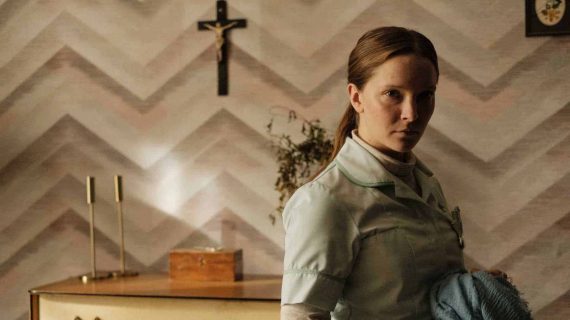 Saint Maud has been marketed as a horror movie and though it fits the genre in many ways, it actually works equally well as an intimate yet intensely dark drama. As Glass describes in a Q&A included on the disc, she would pitch the project to potential investors by asking them to imagine “Travis Bickle as a young Catholic woman living in an English seaside town”. This sums up the film nicely. Like Bickle, Maud is a troubled individual who’s lost and alone in a world they see as being full of sin. They both believe they can cleanse it through misguided, destructive means. As such, it’s less about religion as it might seem on the surface and more about dealing with mental illness, chiefly trauma and loneliness.

Being such a dark, bleak and horrific film, you could argue it’s not the most sensitive portrayal of someone suffering from mental health issues. However, it makes for powerful drama, highlighting the importance of dealing with such problems, even if it does so by underlining its points in blood.

Saying that, the film isn’t a gruesome, bloodbath style of horror movie. There are one or two big shocking moments of gore but these are very short and sharp, providing more of a jolt to the system than revelling in blood and guts. There are, however, several squirm-inducingly nasty sequences, largely involving Maud inflicting pain on herself in various acts of self-flagellation.

Away from these short bursts, the film earns its horror accreditation through slow-burning subtle chills. It’s Maud’s blinkered, misguided devotion to her ‘cause’ that’s frightening, as well as some minimal effects such as fluctuating lights, bodily contortions and surreal alterations to the world around Maud.

Many strange things happen to the character and she sees weird vortexes wherever she goes. These are never explained and it isn’t made clear whether or not they’re actually happening or if they’re just a by-product of Maud’s fractured mind, but I lean heavily towards the latter.

Away from the film’s content, it’s beautifully crafted on a technical level. The cinematography is bathed in darkness and textures and colours are used to contrast Amanda’s gothic home with Maud’s rotten little bedsit and the grubby, unnamed seaside town they live in.

The music is very effective too. It’s sparingly used in the first half but builds as the film goes on, using discordant swells to further unsettle the audience. It’s rarely used for cheap jolts as in a lot of horror films. In fact, the film only has literally one or two moments that could be classed as jump scares.

The film is nice and lean too, tightly cut to a short 84 minutes and containing no unnecessary padding. It’s nice to see a film that gets to the point at a time when most blockbusters are hovering around the two-and-a-half-hour mark. The film achieves this partly by avoiding spelling too much out to the audience. The event that sparked Maud’s sudden change in character isn’t fully explained. We just get a couple of very brief flashbacks that let your imagination fill in the gaps. This adds to the uncomfortable uncertainty about what’s happening to Maud and avoids the pitfalls of trying to use cod-psychology to explain her issues. 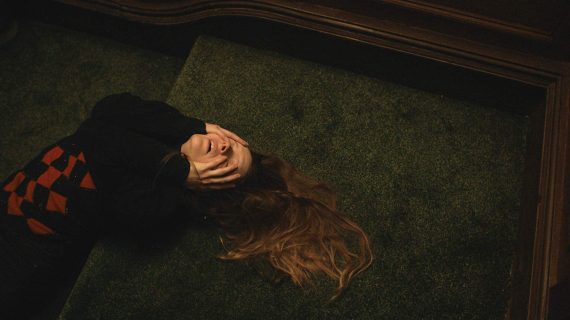 All in all then, it’s an intensely focussed drama blended with creepy psychological horror that buries itself deep under your skin. It’s a disturbingly captivating film that never over-plays its cards, building moments of surreal old-testament fire and brimstone but pulling them away before they interrupt the bleak story at its core. Its vision of mental illness might be too extreme but it’s strong stuff nevertheless and certainly marks Rose Glass as a writer/director to watch out for in the future.

Saint Maud will be released on DVD, Blu-ray, Limited Edition steelbook and Digital platforms on 1st February 2021, courtesy of Studiocanal. I watched the Blu-ray version and the picture quality is excellent, with the format nicely handling the dark visuals, retaining detail whilst keeping the blacks deep. Audio is strong too. It gave my subwoofer a good workout when the music got incredibly bassy later on.

All physical editions include the following extras:

The commentary is very good. Glass and editor Mark Towns have fun recollecting the shoot and discussing how things changed from script to first cut to final cut. They have a nice rapport so it’s an easy listen.

Glass’ Q&A is great too. She’s clearly quite nervous but answers in fair detail and good humour so it’s a pleasure to watch.

‘Maud and Amanda’ and ‘Creating the World’ are short but illuminating behind-the-scenes featurettes. ‘Constructing the Scene’ shows some outtake footage with added commentary from Glass. Like in her other contributions, she’s fairly self-effacing and full of interesting anecdotes about the shoot.

So, a great package for a great film. Highly recommended.