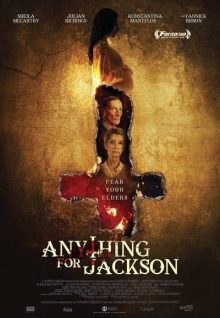 Suffering after the death of their grandson, Jackson, an elderly couple attempt the unthinkable – to bring their grandson’s soul back and place it into the body of an unborn child. But, after completing this satanic ritual, they realise that they may have made matters worse by inviting an unwanted malevolence into their lives.

Shudder is fast becoming one of the go to streaming platforms for horror fans. As with all streaming platforms, however, viewers will find a gamut of both quality and choice. 2020 has seen the platform go from strength to strength, however, with breakout hits such as Host and The Mortuary Collection, and the year is closing with another unexpected hit in the shape of Anything For Jackson.

Anything For Jackson is one of those special films that challenges you to find its pidgeonhole. From the opening scene it frames itself as a kidnapping thriller, but quickly shifts gear into an occult horror. Then it’s a ghost story with a tinge of the surrealism at the heart of cosmic horror teasing at its edges. But throughout, there’s no doubt that the heart of the story is a drama about grief, namely the grief of two grandparents at the loss of their only grandchild.

Audrey and Henry Walsh, played wonderfully by Sheila McCarthy (Die Hard 2) and Julian Richings (Man of Steel) are simultaneously the protagonists and antagonists of the story and their act of kidnapping Shannon (Mantelos) is both coldly callous and heartbreakingly desperate. The mundanity of this initial part of the story helps to build a picture of both this couple and their victim, how they have come to know each other and why they are all in the situation they find themselves in. Told non-chronologically with flashbacks to fill in narrative gaps, the slow burn leads up to a second act change of pace that ratchets the film into proper supernatural horror territory.

The photography from DoP Sasha Moric is front and center one of the driving forces of the emotion of the film, shifting gears from static shots through to handheld camerawork, breathing life and depth into the Walsh’s and their house, the location in which we find ourselves for the most of the film. It never feels workmanlike and every frame is absolutely set up to tell a story, especially as Henry and Audrey find themselves hosts to unwanted guests.

The horror in Anything For Jackson, at the hands of scriptwriter Keith Cooper and director Justin G. Dyck, manages to find a superb balance between creepy and horrifying, placing the ghosts of the film in the corners of frames, exploding onto the screen in moments of sharp and sustained terror. It’s rare to find a horror film that manages to be both gory AND scary, and the balance here is profound with the gore never feeling gratuitous and the scares feeling unsettling. The film also makes good use of prosthetics and animatronics with very little CG, something that many mid to low budget films often fall onto as a crutch. There’s plenty of claret thrown around in many scenes, and the performances of the silent actors that breathe life (death?) into the spirits that haunt the Walsh’s are some of the best I’ve seen in the genre for a long time.

There’s a definite sense of love for the story at the center of this film and a desire to see it done well. It’s great to see something that puts older stars front and center and lets them carry the emotional weight of the story rather than the usual pretty young things that frequent the horror genre, and it makes the film all the more engrossing. With its unpredictable script, horrifying set pieces and ambiguous ending, Anything For Jackson is a great horror to see out 2020 with, and a film that’s easily on its way to becoming a cult classic.