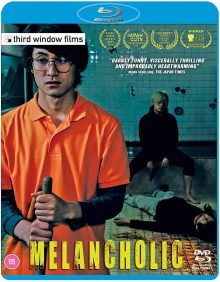 Melancholic came about after friends Seiji Tanaka, Yôji Minagawa and Yoshitomo Isozaki decided they wanted to make a film together. Tanaka knocked up a script and the trio brought together people they knew from their theatre troupe to act in a short pilot version of the film, with Tanaka directing. This attracted enough interest for them to turn the idea into a low-budget feature film and the end result, Melancholic, with its meagre beginnings and inexperienced team, ended up taking home a raft of awards in Japan and has now made its way to UK shores via Third Window Films.

Melancholic sees Minagawa play Kazuhiko, a young graduate of Tokyo University who is at a loss for what to do next with his life. He doesn’t want to pursue a potentially well-paid but stressful high-flying career as is expected from him, so is merely drifting through life, still living with his middle-class parents. However, a chance encounter with an attractive former classmate Yuri (Mebuki Yoshida) at a bathhouse changes his life forever.

She talks him into going to their high school reunion and there suggests he gets a job at the bathhouse. Knowing that she visits there regularly and seems to like him, Kazuhiko follows through on the suggestion, answering owner Higashi’s (Makoto Hada) advert for staff in the window. All goes as expected in the job at first, but Kazuhiko discovers one night that the bathhouse is being used as a place to execute enemies of the local yakuza gang (led by Tanaka, played by Masanobu Yata). When he’s spotted, hitman Kodera (Yasuyuki Hamaya) almost takes Kazuhiko out too, but Higashi instead lets him get involved in the establishment’s evening activities. 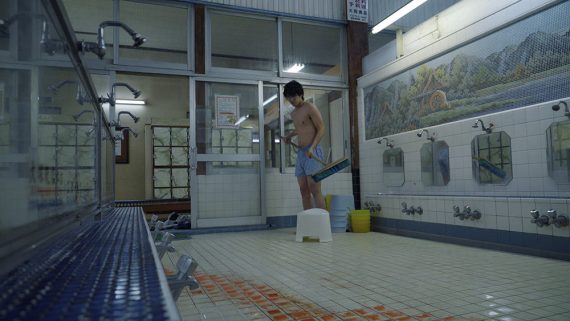 So, alongside his colleague Akira (Yoshitomo Isozaki), Kazuhiko spends his nights disposing of dead bodies and cleaning up afterwards. This new lease of life invigorates the young man and helps him move forward with his relationship with Yuri too, but when he starts to get in too deep, largely due to added pressures from Tanaka, Kazuhiko must seriously consider where his future lies and what he must do about it.

I liked Melancholic quite a lot. It effectively balances a range of styles and moods to create a unique film. There are some typical gangster movie tropes (complete with surprisingly good fight choreography by Isozaki in the film’s couple of action sequences) but these are countered by taking a blackly comic look at yakuza life, showing it as yet another mundane career path open to people. Characters are non-plussed by the bloodshed after a short while on the job (“I kill people for a living. It’s not so violent as it sounds”) and there are even ‘office politics’ in Kazuhiko’s jealousy over Akira’s preferential treatment. 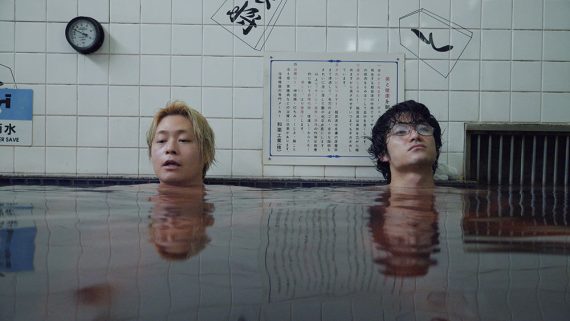 This humour and violence is further offset by some genuinely touching moments. For one, there’s the relationship between Yuri and Kazuhiko, then you’ve got the friendship and understanding growing between the employees of the bathhouse. This side of things threatens to mire the film in sentimentality at the end but Tanaka (the director, not the character) gets away with it by keeping a few details ambiguous and through offering a final message about living for the brief, perfect, happy moments in life that is hard to argue with.

This final message also makes it clear that the film is really about careers in general and not letting work and the pressure to do what is expected overwhelm and become you, so to speak. You can see this in how Tanaka (the character) forces people to work in his organisation mirrored by how everyone around Kazuhiko expecting him to be in a ‘respectable’ job, following his prestigious degree.

The only minor quibble I had with the film was that I felt Minagawa’s performance was a little forced. He’s not bad as an actor, but overplays some of his little ticks and mannerisms, playing the awkward ‘geek’ character a little too obviously. His scenes with Yoshida are touchingly clumsy though, so it does work at times, I just felt he overplayed it a tad. 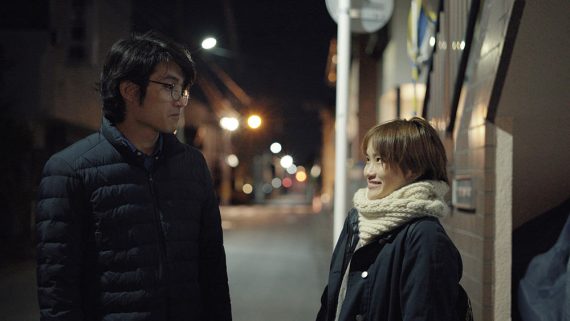 Being a low-budget feature, it can look a little cheap at times too, though Tanaka does the most with his minimal resources and delivers a few nicely shot sequences throughout the film

Overall though, it’s a refreshingly low-key, funny, and occasionally sweet spin on the yakuza/crime genre. Deglamourising the underworld, showing it as just another mundane career path people are forced into, it makes some meaningful general comments on life and work whilst offering an enjoyably off-beat story of a young man trying to figure out what to path to follow.

Melancholic is out now on dual format Blu-Ray and DVD in the UK, released by Third Window Films. The picture quality is immaculate, with a sharp and clear picture. Audio is solid too.

As with a lot of Japanese behind the scenes featurettes, the one here spends far too much time showing all the principal cast members’ wrap ceremonies, but it’s still nice to catch a glimpse of the work that went into this low-budget production. The Q&A is more revealing though, filling you in on how the film came about and its reception.

The short film is also a welcome addition. Though the basic idea is the same, along with much of the cast, it’s markedly different in how it develops and how some of the characters are presented. It’s not as strong as the feature film, so it’s good to see Tanaka wasn’t precious about his initial attempt at the story and knew what to change to flesh the idea out to feature-length.