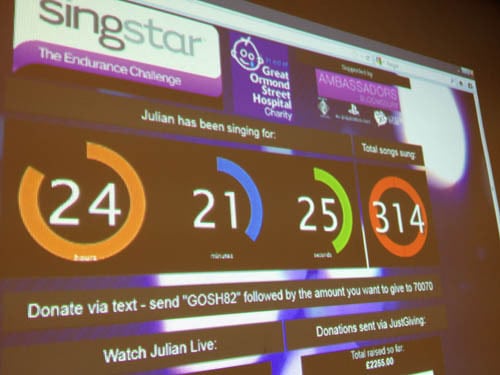 As posted at the end of last week, Julian Hill finally set forth on the ‘SingStar The Endurance Challenge’, a Guinness World Record attempt to raise money for Great Ormond Street Hospital Children’s Charity (GOSHCC). Well Julian contacted us yesterday to thank everyone for all for the support you’ve given him as well as to fill us in with what happened on the day.

Here’s what he had to say:

Well on 13th of April – 14th of April in the Ambassador’s Bloomsbury Hotel London, I completed my challenge. This involved playing the Playstation game SingStar continuously for 24 hours 21 minutes 25 seconds, a total of 314 Songs in that time. Achieving this meant I was awarded the Guinness World Record for “longest video games marathon playing a karaoke game”. The whole event was streamed live over the Internet, with nearly 2000 unique viewers watching a grand total of over 500 hours between them. I was viewed in UK, Ireland, France Germany, New Zealand, Japan, America and Australia, with the most popular moment being my final song. In total I have now raised nearly £3000, from over 150 different donations.

I really want to thank you for all the support you gave the event, up to and during the day. I was overwhelmed by how the online gaming community got behind this and that’s obvious in donations.

London Studios have now made a video of the day which can be viewed here:
http://www.singstar.com/news/SingStar-Endurance-Challenge-Video.html

I will also be featured on the PlayStation Network TV show Access either this week or next.

Donations are still very welcome at www.justgiving.com/julianhillGOSH, I’d love to smash the £3000 mark!

Thanks again for all your amazing support!
Julian 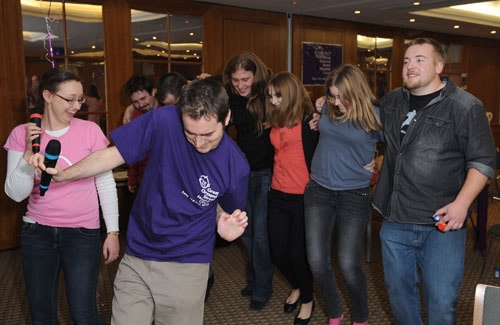