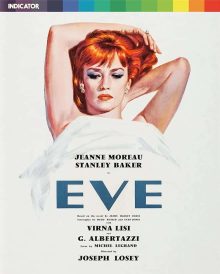 “One of the biggest opportunities of my life to make a really personal statement was destroyed by a couple of peanut men.” Joseph Losey, on Eve in 1985.

The story of Eve is one of those frustrating “could have been” tales, akin to The Magnificent Ambersons, where interference from a film’s producers led to a butchered version (or versions) being released and the director’s intended cut being lost forever.

Joseph Losey’s original cut of Eve, which was submitted to the Venice Film Festival, was 155 minutes. The director approved a cut-down 135 minute version soon after though. In Losey’s own words, this “is approximately the length I think the picture should be”. However, Eve’s producers, the Hakim brothers (Raymond and Robert), cut this down further, without the support of Losey, first to 125 minutes and later to 115 minutes for the commercial release of the film. The soundtrack was altered for these shorter cuts too, and the film’s title was changed to Eva in most territories and The Devil’s Woman in others.

After coming across the 135 minute version playing in Helsinki in the 60s, Losey bought the print, but when it arrived he found 15 minutes excised from it, much to his frustration. In 2005, when Eve was planned to open a special season of Jeanne Moreau films at EYE Filmmuseum in Amsterdam, they wanted to screen it in as complete a form as possible. The problem was that this ‘director’s cut’ print, on top of missing some footage, had distracting Finnish and Swedish subtitles written onto it. So, the painstaking job of combining the available prints (as well as finding some non-subtitled footage in Rome’s State Film Archive) began and the film was restored to not-quite Losey’s preferred original version, but at least as close as possible. 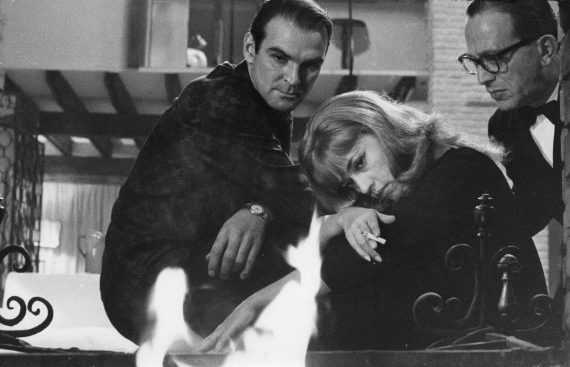 This 126 minute cut of the film is being released on Blu-ray by Indicator, along with the Eva and The Devil’s Woman versions for comparison. I must admit I’m a Joseph Losey ‘virgin’, so I thought Eve, which the director considered one of his favourite and most personal films, would be a good place to start, despite it being unavailable in its ‘complete’ form.

Eve sees Stanley Baker play Tyvian Jones, a Welsh author who’s written a best-selling gritty novel about miners that has been adapted into a hit film. He’s enjoying the high-life, growing used to getting what he wants, when he wants it, and is set to marry the beautiful and doting Francesca (Virna Lisi). However, when he finds the titular Eve (Jeanne Moreau) uninvited at his house, sheltering from a storm one night with her partner, his desires get the better of him.

Eve is no pushover though. She constantly toys with Tyvian’s affections, driving him to drink and destruction as his proposed marriage hits the rocks and the anger of the jealous Michele (Riccardo Garrone), who loves Francesca, threatens his career. Tyvian becomes obsessed with Eve, but she forever remains distant and unobtainable. 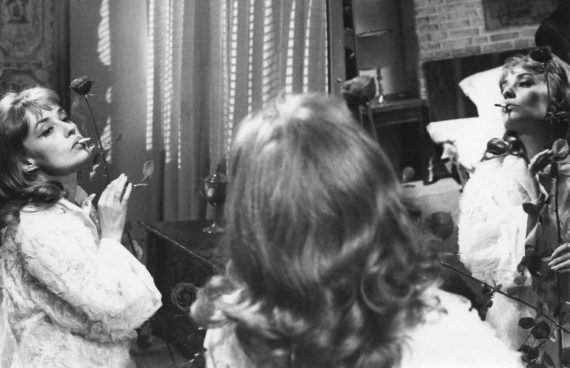 I wasn’t convinced I’d think much of Eve, because on the surface it looked like a type of film I particularly dislike – a story of rich, unpleasant people in toxic relationships. My worry proved in many ways well-founded, as I found the film a bit of a chore due to its prime focus being on its unlikeable characters rather than any sort of engrossing story. However, the film grew on me and I found much to admire, despite the off-putting subject matter.

For one, I didn’t actually find the Eve character wholly unlikeable. Some critics describe her as an evil seductress, ensnaring Tyvian into her web of sin. However, I prefer to take Gavrik Losey’s (Joseph’s son) view that she’s an “avenging angel”. It’s Tyvian who originally forces himself onto her and doggedly pursues her throughout the film. He’s a repulsive character whose despicable deeds culminate in a shocking revelation about the source of his success. So the games Eve plays with him, which ultimately lead to his downfall, can be seen as revenge for womankind’s subjugation at the hands of such monsters. 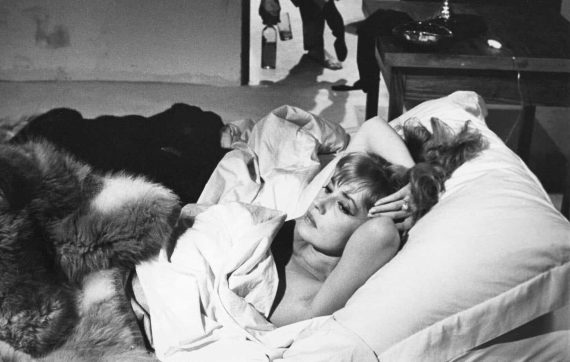 Away from the film’s content, I was also very impressed by its style. Losey and his cinematographer Gianni Di Venanzo make great use of visual framing devices, depth and movement to create an atmospheric and artful film. This is further aided by some excellent editing by Losey’s regular editor Reginald Beck. His skill is particularly notable in a jazz-club scene where the cutting and camera angles perfectly match the abstract, percussive music playing on the soundtrack.

Speaking of the soundtrack, Michel Legrand provides an excellent jazz-inflected score, which drives the film along. Losey originally wanted Miles Davis to score the film, with lots of Billie Holiday tracks countering and interweaving with this. The Hakim brothers let him down though, failing to follow through with obtaining a contract with Davis and only licensing a couple of Holiday tracks, so Legrand ended up getting the job instead. Losey was happy with Legrand in the end though and worked with him again subsequently. 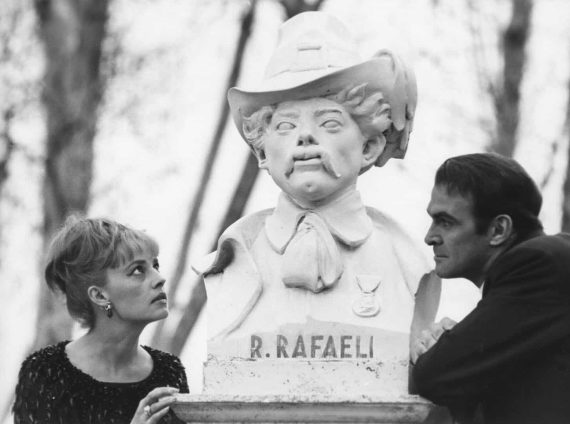 The performances are excellent too. Baker is well-cast as the tough and driven but ultimately impotent Tyvian, but Moreau steals the show. She perfectly fuses a care-free attitude with a tough, sly edge that proves a deadly combination for our male protagonist. Right from the early moments when she quietly makes herself at home in Tyvian’s house before they meet, she exudes sexuality but with a child-like playfulness that’s irresistible to watch.

So, although I had my reservations about the film and found it a difficult watch, it’s undeniably exquisitely crafted and well-performed. Whether or not Losey’s original cut would further improve the film is under question, but in this ‘long as possible’ form, it’s certainly worthy of reappraisal.

Eve is out now on Blu-Ray in the UK, released by Indicator. Due to the nature of the restored longer version of the film, the picture quality is a little hit and miss. The added footage is often quite damaged and occasionally has Finnish subtitles burnt in. Some of the darker scenes suffer in particular but elsewhere the picture quality is decent. I had no issues with the audio though.

– Brand new 2K scan of EYE Filmmuseum’s photochemical restoration of the longest known version of the film (126 mins)
– High Definition remaster of the original European theatrical release version of Eva (109 mins)
– High Definition remaster of the alternative The Devil’s Woman version (109 mins)
– Original mono audio
– Archival Interview with Joseph Losey (1967): the acclaimed director discusses Eve in this extract from the French television programme Cinéma
– Archival Interview with Jeanne Moreau (1972): extract from the French television programme Tête d’affiche, featuring the celebrated star in conversation with actor France Roche
– The BEHP Interview with Reginald Beck (1987): archival audio recording, made as part of the British Entertainment History Project, featuring the editor, and regular Losey collaborator, in conversation with Alan Lawson
– All About Eve (2020): interview with filmmaker Gavrik Losey, son of Joseph Losey
– A Creation Myth (2020): appreciation by author and film historian Neil Sinyard
– The Many Faces of Eve (2020): a description of the differences between the various cuts
– Image gallery: publicity and promotional material
– Original UK and French theatrical trailers
– New and improved English subtitles for the deaf and hard-of-hearing
– Limited edition exclusive 36-page booklet with a new essay by Phuong Le, Joseph Losey on Eve, a look at the James Hadley Chase source novel, an overview of contemporary critical responses, Simona Monizza on the EYE Filmmuseum restoration of Eve, and film credits
– World premiere on Blu-ray
– Limited edition of 3,000 copies

The archival interviews with Losey and Moreau are a tad pretentious and fairly short, but the Reginald Beck piece is quite a find. Running over the majority of the film like a commentary (but not actually linked with the film of course), it offers an incredibly extensive look-back over the editor’s career. It can be very technical at times – I’m an editor and was still a little lost now and again when he talks about the old way of cutting, but it still makes for a fascinating listen.

Neil Sinyard’s essay is more approachable and helps better appreciate the film. Likewise, Gavrik Losey’s interview is fairly in-depth and makes for recommended viewing. The Many Faces of Eve piece describes in detail why there are so many different versions of the film and what distinguishes them.

The booklet is as valuable as ever too, being crammed with essays, period reviews and such.