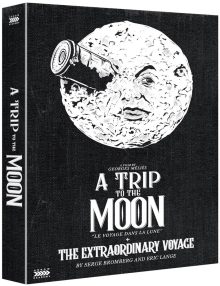 A Trip to the Moon is an unusual release from Arrow Academy, in that the film the Blu-ray set is focussed around is only 12 minutes long. You might think you’re being ripped off when you see that running time listed but, to begin with, Georges Méliès’ film is one of the most important and groundbreaking films in cinema history. Also, the film is accompanied by a feature-length documentary about A Trip to the Moon that is very good in its own right, as well as a 214-page hardback book containing the director’s autobiography, which has previously been unavailable in English. So you get your money’s worth.

In The Extraordinary Voyage (the aforementioned documentary included in the set), A Trip to the Moon is described as being the “first international hit in motion picture history”. Before Méliès hit the scene, early films were simply photographed scenes of reality. The Lumière brothers, who made some of those first steps, saw the technology of the moving picture as a scientific curiosity rather than entertainment, but when Méliès attended a private demonstration of their cinematograph in 1895, he saw its potential to thrill audiences at his Théâtre Robert-Houdin, where he performed magic tricks and other fantastic spectacles.

The Lumière brothers unfortunately wouldn’t sell him one of their cinematographs, but he eventually worked alongside Lucien Korsten, and Lucien Reulos to create the Kinétographe Robert-Houdin, which could operate as both a projector and a camera. Méliès then set to work creating his own films to entertain theatre-goers. He helped develop some of the earliest narrative films but most notably experimented with using camera tricks to create new ‘magic tricks’ for his theatre. 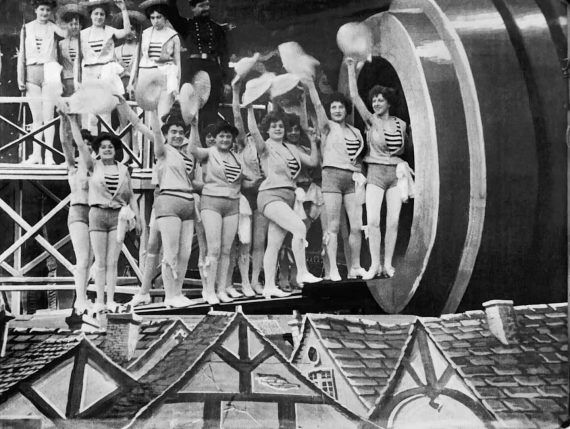 The results were astonishing and his proficiency and ambition grew with each film, as his popularity grew. He built the first ever movie studio, which was basically like a big greenhouse, designed to let as much light in as possible (they didn’t have big electric lights back then) and his work culminated in A Trip to the Moon. This was so impressive and popular with audiences that it became a huge international success.

However, Méliès’ work at the time wasn’t copyrighted and he became the first victim of film piracy, with prints of A Trip to the Moon getting copied and distributed without him seeing a penny. He learnt from this mistake for future films, creating copyright cards for his titles and using visible stickers on his sets, but with so many imitators appearing soon after, watering down his success, and WWI eventually rearing its ugly head, Méliès drifted into obscurity, discovered in later years selling toys in a Metro station. In his darker days he had even destroyed the vast majority of his work, burning his hundreds of prints after having to sell his studio. He was later rediscovered, thankfully, and his importance to filmmaking is better appreciated. Luckily prints of many of his films were salvaged too, so his legacy remains. 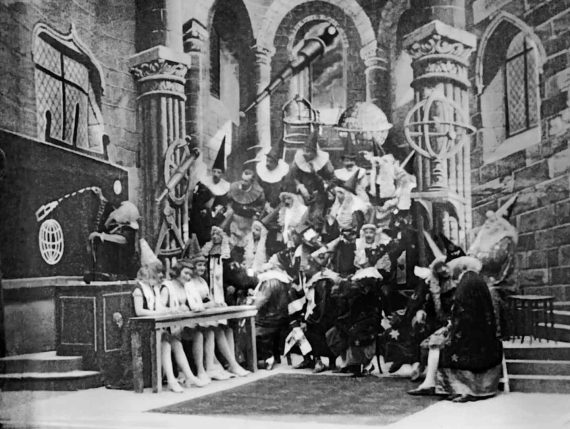 But, history aside, how does A Trip to the Moon look today? Well, it’s certainly aged, not helped by the fact humans have since actually been to the moon and can confirm it looks nothing like Méliès imagined and travel to and from it is much more complicated (their trip home is hilariously quaint). The story is also very slight and involves more dancing and parading around than is possibly required. It basically consists of some scientists/astronomers meeting for a lecture about how they could travel to the moon, then building a rocket to do so. They fire themselves out of a canon in this rocket and land successfully. On the moon, they have a sleep before meeting some hostile creatures and swiftly head home again for a parade. Simple stuff then, but it’s enough to keep you engaged.

To criticise a 118-year old film for being dated would be ridiculous though. You’ve only got to look at what else was being made at the time to realise just how amazing A Trip to the Moon must have been back then. Whilst most narrative films of the time were simple comedy skits, Méliès was taking audiences to another world (well, moon) to experience nothing they’d ever seen before. There’s more than a touch of the stage in its presentation, with painted sets on flat boards, but Méliès adds special effects such as smoke and ‘disappearing’ or ‘transforming’ props/characters. The latter would not have been possible in this fashion on stage and some of it is done very well, even by today’s standards. When the ‘moon monsters’ are whacked by the chief scientist and explode, for instance, it looks pretty damn good, all things considered. 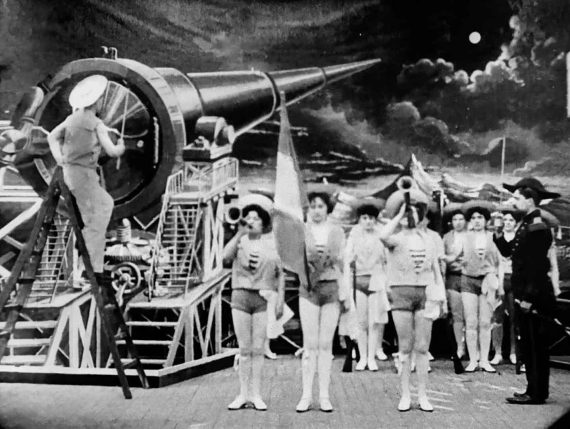 The production design is wonderful too. Méliès’ sets, props and costumes are not what you’d call ‘realistic’, but they’re lavishly and beautifully realised, with a style that remains quite distinctive. He designed and painted them himself, helping mark him out as a true auteur.

So, A Trip to the Moon might not be as exciting or polished as today’s sci-fi and fantasy films but, without it, your Marvel and Star Wars movies wouldn’t have existed. Méliès’ masterpiece created the very idea of a blockbuster and showed the world that cinema could transport you to other worlds and, more importantly, become much more than a simple sideshow gimmick. 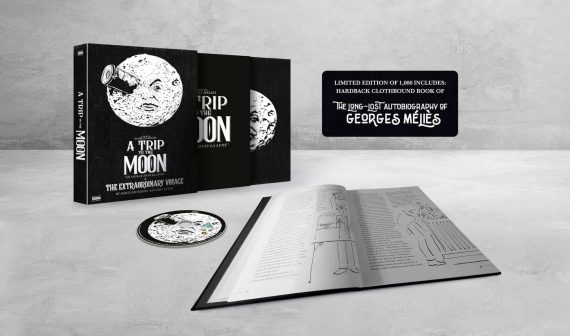 A Trip to the Moon is out now on Blu-Ray in the UK, released by Arrow Academy in a special box set currently exclusive to the Arrow Films website. The film is 118 years old and the master/negatives were destroyed so you can’t expect miracles with regards to the print, but it looks good, all things considered. Of course, there is damage, some washed out areas and the picture isn’t as sharp as on more modern films, but there is still a decent amount of detail.

Both the period colourised version, which has been newly restored, and the previously available black-and-white versions are included, as well as numerous score options, so all your bases are covered. The film wasn’t originally colour-tinted, but when the process became popular shortly afterwards, Méliès had the film colourised. This was a painstaking, hand-done process at the time, so isn’t smooth and refined, but it gives the film an almost psychedelic look that I personally preferred to the black and white version.

For the scores, there’s a classical-style track by Robert Israel that I enjoyed a great deal. Frederick Hodges provides a more traditional piano accompaniment, if you prefer that style. Jeff Mills’ score is a modern, electric take on it. I found it a little repetitive, but it has a hypnotic quality. Finally, there’s a prog-rock-style score by Dorian Pimpernel. This is pretty cool, if you’re into that style of music, and certainly not what you’d expect from a silent movie accompaniment. Two of the scores come with narration and background dialogue as an added option. The narration seems unnecessary and the dialogue ill-fitting though, so they’re not particularly good.

It must be noted that not all scores are available on both the colour and black-and-white versions. They’re split between the two as the length is slightly different.

The Long-Lost Autobiography of Georges Méliès: Father of Sci-Fi and Fantasy Cinema 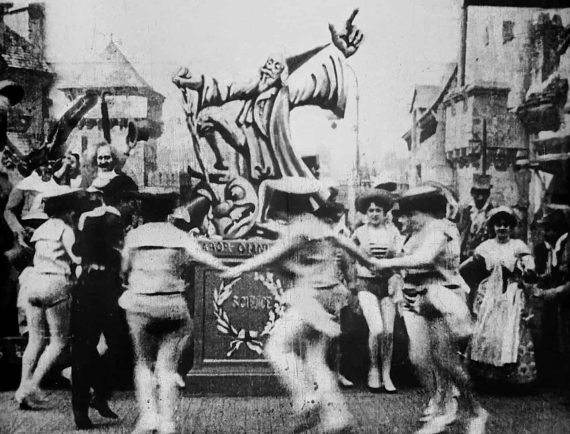 The Extraordinary Voyage is obviously the major draw here, in terms of video extras. It’s a fascinating and inspiring film about a true cinematic pioneer and the long quest to resurrect his most famous work to its former glory. It provides a wealth of information about Méliès and his innovations, as well as clips from some of his other short films. The story of the restoration takes up a good portion of the film and is engrossing too. It truly makes you appreciate the work and passion that goes into restoring classic films, as well as the importance of such a task.

Elsewhere on the disc, the video essay covers some of the same ground as the feature documentary but still has a few fascinating tidbits, so is worthwhile.

The short Le grand Méliès by Georges Franju is wonderful too. As well as offering an enjoyable, romantic potted history of Melies’ life and work, it’s beautifully made with attractive and occasionally quite inventive cinematography. It also effectively portrays the magic of Melies’ tricks and techniques. It shows how some of his most famous sequences were made too. It’s a fantastic addition to the set that’s every bit as valuable as the feature length doc.

I didn’t receive a copy of the book to comment on that, unfortunately. The set has quite a hefty price-tag and that is likely due to the book, so I believe your interest in that will be crucial to purchasing the release.

Personally, I would have preferred a disc with a large collection of Méliès’ shorts rather than this lavish treatment of just one, but it’s still a fine set and with the feature-length documentary and book included, it’s still a valuable release.