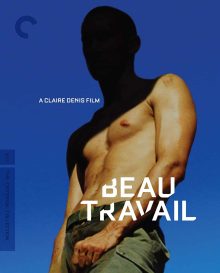 In the late 90s, the director Claire Denis was asked by the French television channel ARTE to make a film about “foreign lands” for a series they were producing. Initially, as a joke (as she puts it in an interview included on this disc), she thought of the French Foreign Legion, but later thought it could actually work and might prove interesting. She visited some legionnaires as research, discovering they were like a family, as many didn’t have families of their own. They were often men who were escaping from problems back home, seeing long service overseas as a chance to either escape or make a fresh start. Denis thought this could make for interesting subject matter so took an alternative slant on ARTE’s topic by exploring not only these soldiers being stationed in a foreign land, but what it meant to be “a foreigner to oneself”, as she puts it. Another interesting spin on the idea came from setting the film in contemporary Djibouti, East Africa, which at the time of production was more than twenty years free of French rule, making the soldier’s presence there all the more ‘out-of-place’.

The resulting film, Beau Travail, is probably Denis’ most well-known and highly-regarded work. It’s a title I’ve been well aware of for a while but never got around to watching. I’d seen clips here and there though, particularly in Mark Cousins’ Women Make Film (and I believe The Story of Film: An Odyssey, but don’t quote me on that). I must admit, they didn’t sell the film to me. It looked visually impressive but a little too abstract and homoerotic for my tastes, to be honest, so I didn’t rush out to see it. I’ve heard so much praise for the film over the years though that, when offered a screener of the Criterion Collection’s new Blu-ray of Beau Travail to review, I figured I should finally bite the bullet. 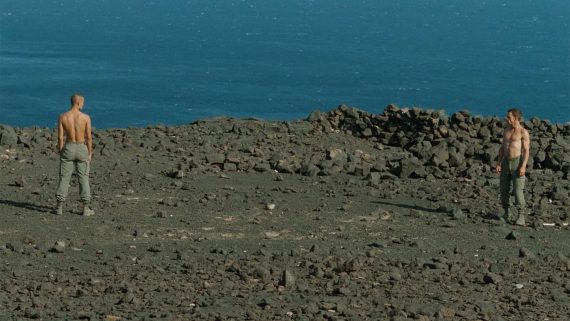 Beau Travail loosely uses Herman Melville’s novella ‘Billy Budd, Sailor’ as the basis for its story, though Denis changed the time and setting, whilst making something completely unique in the process. Denis Lavant plays Galoup, a sergeant in the Foreign Legion who harbours a distrust and jealousy of one of his soldiers, Sentain (Grégoire Colin). This disdain for the man is largely due to Galoup’s superior, commander Bruno Forestier (Michel Subor, playing a character he’d played before in Jean-Luc Godard’s Le Petit Soldat), taking a shine to Sentain, cemented by an act of bravery on the soldier’s part, when he selflessly saves someone from a helicopter crash.

Whilst the soldiers carry out their regular exercises, Galoup plots his revenge on Sentain, leading to a cruel punishment that gets the sergeant kicked out of the military. Throughout the film, we cut back to Galoup back at Marseilles, after his expulsion, where he struggles to adapt to civilian life. The story is told via his narration.

The plot and dialogue in Beau Travail are minimal, but there’s plenty of subtext to flesh it out. There’s the aforementioned ideas of foreignness, not only in the literal sense of the largely French soldiers being based in a foreign land, but also in Galoup’s loss of place once left alone in Marseille after the life he’d been conditioned to in Africa. There’s also the often-discussed homosexual undercurrent of the film. This is never openly discussed or displayed, but there is a hint of something beyond mere camaraderie between the men, particularly Galoup and Forestier (at least on the former’s part). There seems to be something else behind Galoup’s jealousy of Sentain too, as it appears to be baseless, on the surface. The young man is fit and attractive, countering Galoup’s rough, more aged appearance, so perhaps Galoup’s anger stems from repressed feelings for Sentain.

The actual legionnaires were not happy about the production, reportedly. They’d heard rumours about its content and approach and worried it would show the legionnaires as being gay, so Denis and her cast and crew were supposedly watched during the shoot and threatened. Denis claims legionnaires she’s spoken to since the film’s release were complimentary though. 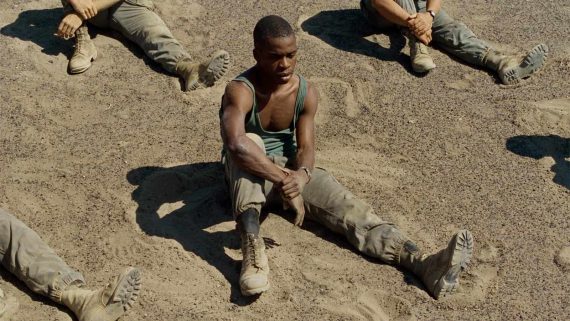 Impressing me more than any hidden subtext though, was the film’s style. Most striking in the film is its use of movement. The legionnaires’ military exercises, which make up a great deal of the film, were choreographed by ballet dancer Bernardo Montet, and this dance-like quality shines through. The team of actors did weeks of training in both military drills and the choreography, to produce the stunning ritualistic displays we see on screen. Lavant didn’t attend this, which helps set him apart from the rest of the group.

The exercises are also stunningly captured by Denis and her cinematographer Agnès Godard. With bold use of contrasts, landscapes, blue skies and blinding light, the film looks incredible from start to finish. Bodies are captured beautifully too, with frequent close-ups making the most of their subtly graceful movement. This is all backed up by an equally striking use of music. There’s quite a range used, from diegetic singing among the soldiers, to dance music in a local club, Neil Young at one point and, most notably, frequent use of passages from Benjamin Britten’s opera ‘Billy Budd’. 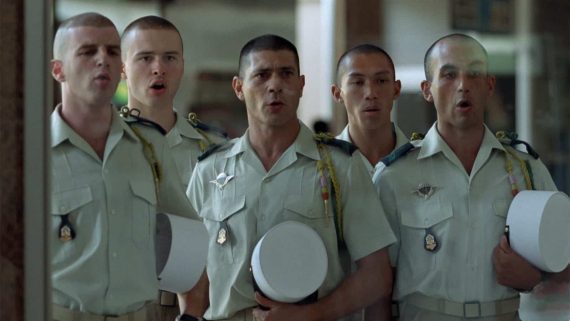 Nelly Quettier’s editing aids this stylistic approach too. This is readily apparent in the opening 7 minutes, where the film cuts between seemingly disparate contrasting images before settling on Lavant in Marseilles, where he begins his voiceover. It’s a disorientating, poetic way to begin the film, setting the tone for what is to come.

Beau Travail ends (after a darkly suggestive penultimate sequence) with an incredibly striking long final shot without any cuts though. This sees Galoup dancing alone in a club we’ve visited a couple of times during the course of the film, though it was filled with people previously. Lavant’s dance in this sequence was improvised in just two takes (with only loose mental preparation on the actor’s part, reportedly) and has an astonishingly raw yet elaborate style to it. Galoup is quite physically restrained during the rest of the film, in comparison to his soldiers, so this comes like an explosion at the end that could signify a number of things from his character. The scene was originally meant to appear earlier in the film, but Denis felt it was so powerful it ended up closing it. This provides a suitably ambiguous coda to the film that further emphasises the physicality driving it all forward.

Overall then, it’s an enigmatic film that I initially felt I wouldn’t have liked but somehow fell totally in love with. Its extraordinary visuals, use of music, sound and movement all work in unison to create a bewitching cinematic poem. I needed to process the film for a while afterwards and dig into the features to appreciate Denis’ intentions behind it, but I loved it regardless. 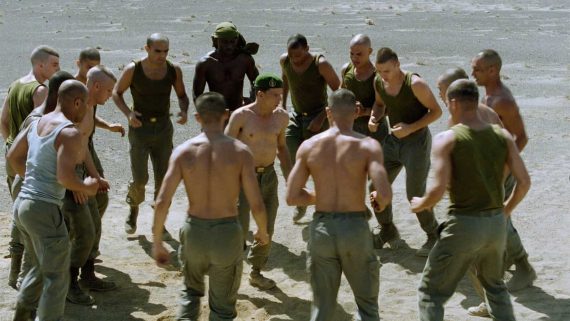 Beau Travail is out now on Blu-Ray in the UK, released by The Criterion Collection. The picture quality is incredible – sharp, natural and detailed with rich colour. The audio is rich and clear too.

The piece with Denis and Barry Jenkins digs fairly deep and is a worthwhile listen, though they talk a lot about the Black Lives Matter movement, whose link with the film felt a bit tenuous.

Godard’s selected scene commentary runs for close to 20 minutes, so is a little short, but she provides detailed and fascinating information about her work on the film and what Denis and herself wanted to achieve visually.

The interviews with Lavant and Colin are fairly substantial too and cover a lot of ground on the prep the actors went through and what they were aiming for.

Judith Mayne’s video essay is intriguing too and the booklet contains one of Criterion’s typically thought-provoking essays on the film. So it’s a well-compiled set all round that comes highly recommended.