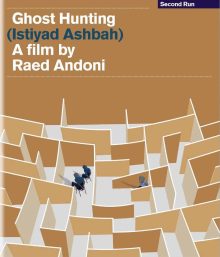 As director Raed Andoni states in his notes on Ghost Hunting (a.k.a. Istiyad Ashbah), “In Palestine, more than four in ten men are, at least once in their life, either arrested or investigated in Israeli prisons. The youngest among them are only 12 years old”.

Andoni himself was imprisoned in Jerusalem’s main interrogation centre, the infamous Al-Moscobiya, and the experience haunted him, so he decided to tackle it in a unique fashion, through the medium of filmmaking.

Andoni put an advert in a newspaper, looking for former detainees of the interrogation centres who also had experience in different crafts related to construction, filmmaking and acting. He interviewed them and assembled a cast and crew to physically reconstruct the interrogation rooms and prison cells exactly as they remembered and then re-enact their experiences on camera.

The documentary blends footage of the meticulously detailed design and construction of the set with the dramatic reconstructions themselves and discussions among those involved, as well as some animated sections created by Monther Jawabreh, a visual artist also present during the ‘workshops’. The process initially creates tension among the group but the team eventually bond in this shared experience. 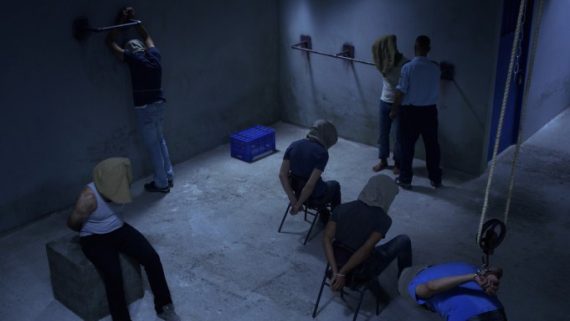 I found this a fascinating and thought-provoking film. Initially it seems like a highly political statement against the Israeli prison system and, yes, this comes to play through the brutal methods of control and domination described and portrayed. However, it soon becomes apparent that the film seems more interested in how the process of making the film acted as a form of therapy session for those involved. It reminded me a little of Alejandro Jodorowsky’s psychomagic therapy, explored in his documentary Psychomagic: A Healing Art, which I watched and reviewed recently. Ghost Hunting has none of the strange quirkiness of that film, of course, but the therapeutic action of reenactment to physically face trauma head-on felt similar.

Interestingly, the ex-prisoners don’t all react in the same way to this process. One man expresses his happiness in letting this weight off his chest at an early stage in the process, whilst others are plagued by nightmares caused by digging up these repressed memories. It makes for an interesting psychological experiment, in this way.

The reconstructions and accounts of what happened to the men (all the participants are male, though we do hear from a female former detainee at the end of the film) are deeply troubling, making for a tough watch for much of the time. However, the film does become quite uplifting towards the end. Not only do we witness these mentally scared people working to understand what happened to them, releasing the pressure often subconsciously crushing them, but there’s a final sequence that sees the prison they’ve built opened up into an art gallery for members of the public (including children) to visit, giving their stories further exposure. 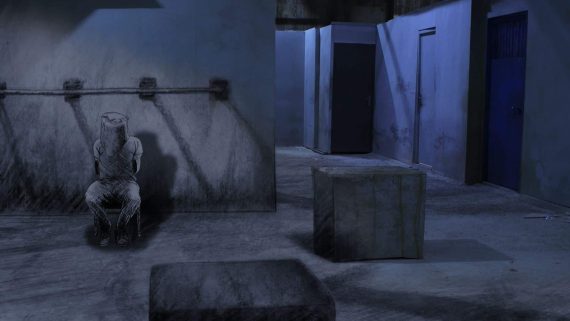 This ending also highlights the idea of using art to tackle psychological trauma, that permeates the entire film. It’s something I’ve long believed in and it’s thoroughly explored here. Watching Jawabreh develop his artwork throughout the process also offers another aspect of this.

As a film, Ghost Hunting is well constructed too. Andoni, in an interview included here, was worried about how he’d combine the different elements of fact and fiction within the film, but I believe he did a fine job. The dramatic reconstructions are weaved in at regular intervals and the accounts of the ex-prisoners whilst they plan these out explain where the details came from. This adds weight to the dramatic scenes, despite you knowing it’s an act and the actors are free to call it off at any time, as they do occasionally, when the men playing the interrogators take things too far. This dynamic is particularly interesting, seeing how the men act when they get to play the other side of their own stories.

I also appreciated the way the film didn’t openly dig into the politics behind everything. Though the film is clearly taking an anti-Israeli stance, in damning their brutal treatment of prisoners, it doesn’t directly approach the Israeli–Palestinian conflict itself. We don’t even hear why any of the former inmates were originally detained. You could argue this suggests they were interrogated for no reason, but I prefer to see it as shifting the focus of the film towards the ex-prisoners’ rehabilitation rather than the touchy political situation behind it all.

So, all-in-all Ghost Hunting is a powerful, fascinating and self-reflexive documentary that is as much a fly-on-the-wall art-therapy session as it is a shocking expose of the treatment of prisoners in Israel.

Ghost Hunting is out now on region-free Blu-Ray and DVD in the UK, released by Second Run. It looks and sounds sharp and clear, as you’d expect from a modern documentary on Blu-ray.

The interview with Andoni is disappointingly short, but the self-reflexive nature of Ghost Hunting means not a lot more is needed to be added to appreciate the director’s intentions.

As always, the booklet is a fantastic ‘extra feature’ in its own right, though I found it spent a little too much time discussing a film festival Evans was involved with and not a great deal on Ghost Hunting itself.