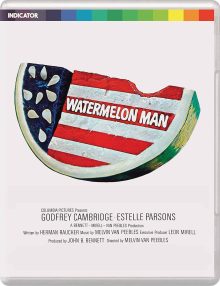 Melvin Van Peebles is an ambitious man who has tipped his hat to a wide range of careers, including joining the Air Force, composing music (his speak-singing style was a precursor to rap music, so very influential) and writing novels and plays. He’s perhaps best known as a filmmaker though, particularly for making the groundbreaking Sweet Sweetback’s Baadasssss Song, which helped launch the blaxploitation genre as well as being a hugely significant independent film in its own right.

Van Peebles never went to film school though, he just decided to make a film after a passenger on the cable car he operated told him the book he’d written about his job would work great on screen. So he made a few shorts but couldn’t find any producers in Hollywood that would hire a black director at the time. He moved to Holland then where his shorts attracted the attention of the art scene. He later produced more shorts there and began to write novels and articles in French (a language he didn’t know until moving out there). Eventually, he made his first feature film, The Story of a Three-Day Pass (a.k.a. La Permission), in 1968, based on his own novel by the same title.

This well-received film caught the attention of Hollywood executives at Columbia. Supposedly, they mistook him for a newly discovered French auteur, with his ‘Van Peebles’ moniker (the ‘Van’ was added when he moved to the Netherlands in 1959), rather than the African-American man that he was. After the success of Easy Rider, Columbia were keen to jump on more daring scripts that cashed in on the cultural shift of the time, so came to Van Peebles with Herman Raucher’s book ‘The Night the Sun Came Out on Happy Hollow Lane’, stating they had Jack Lemon and Alan Arkin in mind for the lead but hadn’t been successful in getting them. Van Peebles said he’d take a look at the script and, after he read this story about a white racist who wakes up black one day, he came back to the executives saying they’d given him the wrong script. The lead character was black, in his mind. The executives said the character was white in the first five minutes though. Van Peebles thankfully convinced them it made much more sense to cast a black man and make him look white than the other way around. He was granted the job and the resulting film was Watermelon Man, which is being released on Blu-ray in the UK by Indicator. 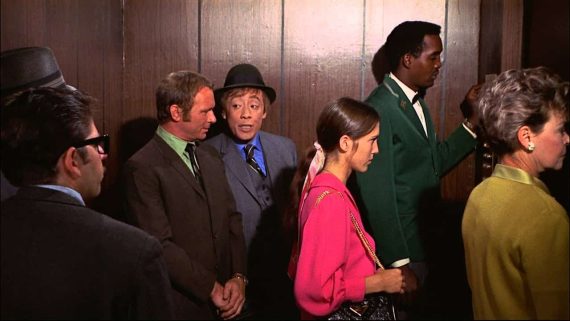 My brief description of the plot in the previous paragraph sums up the idea, but in more detailed terms, Watermelon Man sees comedian Godfrey Cambridge play Jeff Gerber, a self-absorbed, rude, white insurance salesman with a penchant for racist jokes. We witness his rigorous morning routine of exercise, tanning under a sunlamp and racing the bus to his office on foot. He’s rather an unpleasant man, but in his mind, he’s witty and adored. One night, however, he wakes to find his skin has changed pigment completely, making him look like a black man.

Initially horrified by this, he spends a day trying to scrub off the ‘stained’ skin, believing it to be due to his overly powerful sunlamp. Realising he can’t remove it, he heads back to his normal life but finds he is treated completely differently by all around him. Even his wife, who’s initially supportive(ish), finds herself pulling away from him. The experience changes Jeff too, and he must decide what to do with his new life.

Watermelon Man may not be as well-known or respected as Sweet Sweetback, but it was also quite groundbreaking and important in its own way. On top of probably being one of the first films to tackle racism through comedy, it saw Van Peebles become only the second black director to make a Hollywood studio film after Gordon Parks, who made The Learning Tree for Warner Bros. in 1969. Watermelon Man was also a reasonable box office success, so Van Peebles was offered a three-picture deal by Columbia afterwards, which was a huge step forward for black filmmakers. However, Van Peebles didn’t fulfil the contract. He didn’t want to be the studio’s ‘token’ black director working under the orders of white fat cats. Instead, he used the leverage the contract gave him to go independent and make Sweet Sweetback instead. So Watermelon Man helped lead towards this. 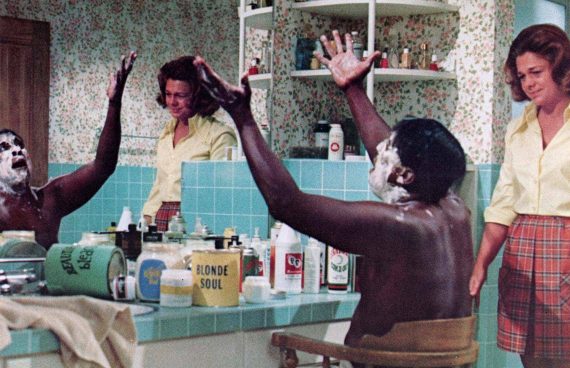 However, as important as the film was, Watermelon Man doesn’t stand up particularly well, unfortunately. I think the brash, overbearing approach to the comedy was the main turn-off for me. It feels like Van Peebles figured the louder and more aggressively delivered the jokes were, the funnier they would be. Instead, it made the whole experience quite abrasive and it stays one-note like this for a while. Quite a few jokes do hit the mark, with the dialogue making plenty of sharp, bold digs at racist attitudes. An amusing example comes when his wife first discovers Jeff’s transformation and asks “should I hide the money?” However, when everything’s yelled at you, the film is more headache-inducing than side-splitting, for the most part.

The first act of the film, when Jeff is white, doesn’t work particularly well either. Rather than portray him as a believable, straight-up, common-or-garden bigot, he’s a bizarre, grotesque character, who has strange routines and foibles, so doesn’t seem to fit in with his middle-class white peers, to begin with. The unconvincing makeup job doesn’t help either. In my opinion, the race-change twist would have had more impact initially showing Jeff as an average white guy, albeit a horribly racist one.

The film does improve as it goes on though and the in-your-face tone calms down after a while, once Jeff learns to accept his new identity and he begins to feel the weight of racial oppression. Cambridge gets to show more range in this portion of the film, after playing the first half in a loud, cartoonish manner that can be amusing but also grating. 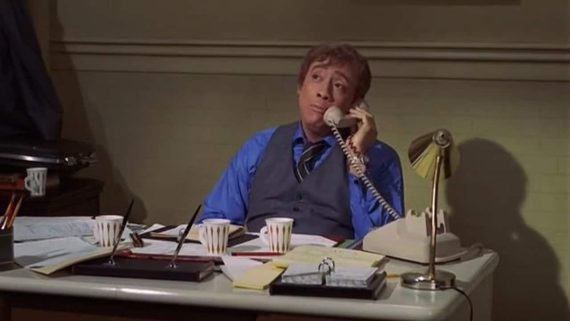 The original script had an ‘it’s all a dream’ ending but Peebles didn’t like it and thankfully changed it to the surprisingly low-key but quietly impactful one we get. He clashed a lot with the screenwriter by the sounds of things. To avoid too much interference from the execs, he said he “worked so fast… that they didn’t have time to figure what changes I’d made in the script.”

Overall then, it’s rather flawed as a film and I found its clamorous style quite grating, but you’ve got to admire the balls (excuse my French) it must have taken to make this back then. Its point isn’t made subtly, by any means, but some things need hammering home. The current climate proves some people still aren’t listening. Plus, I always feel important messages are best delivered in the guise of entertainment such as a horror movie (Get Out for instance) or a comedy, like this. It helps the viewer learn from the film without feeling like they’re in a lecture as they would watching a preachy, solemn prestige-picture. So, although Watermelon Man is no masterpiece, it’s a bold, if not entirely successful effort at tackling a vital issue from a different angle. 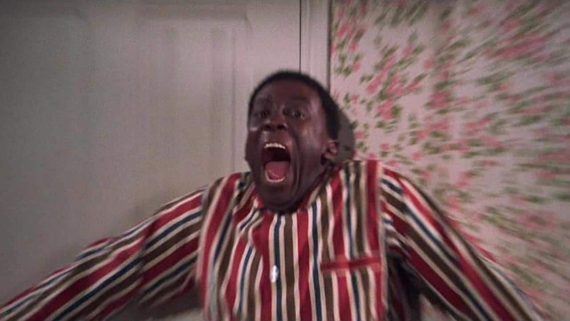 Watermelon Man is out now on Blu-Ray in the UK, released by Indicator. The picture quality is very good, with a clean image containing strong detail and a natural look. Audio is also strong.

There’s not a great deal of material here, but the Guardian lecture is fantastic. Van Peebles doles out some very funny and eye-opening anecdotes as well as making some powerful comments about racism. He’s a charismatic speaker too, so it’s an easy listen. His introduction is also worth a listen, though it’s only 5 minutes long so don’t expect anything too deep.

The booklet is perhaps the most valuable added bonus, as it crams in as much information as it can into its pages to give a fairly in-depth view into the history of the film and the work of its director.

* Please note – the images used in this review are not indicative of the picture quality of the Blu-ray.