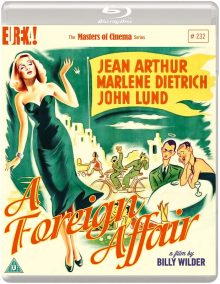 Billy Wilder is one of Hollywood’s most beloved writers and directors and he has a filmography very few, if any, can match. Between the mid-forties and start of the 60s, he churned out cast iron classics, including Double Indemnity, The Lost Weekend, Sunset Boulevard, Ace in the Hole, Stalag 17, Sabrina, The Seven Year Itch, Witness For the Prosecution, Some Like it Hot and my personal favourite, The Apartment. Early on, among this mass of much-loved titles, he made a film with quite a personal connection that has unfortunately fallen by the wayside over the years. The film is A Foreign Affair and Eureka, in their fine efforts to do Wilder’s films justice on Blu-ray, have added it to their Masters of Cinema collection.

A Foreign Affair was personal to Wilder as it saw him return to Berlin, which had been his home for 8 years while he got his career off the ground in the late 20s and early 30s. He’d left with the rise of Nazism in Germany and came back to make this film after the war, shooting a fair amount of location footage among the ruins of the once-great city.

Wilder first headed back to Germany in 1945 to shoot Death Mills, a short documentary about the concentration camps. After this experience, he expressed an interest in making something else that spoke to the American people about the situation in Germany but wasn’t blatant propaganda in documentary form. He believed that something lighter and more entertaining would have more weight with the public. So, he approached the government with this idea and was promised assistance if he made a film about Allied-occupied Germany. This sowed the seeds for Wilder and his regular collaborator Charles Bracket to start work on a script for A Foreign Affair, but, in the end, it wasn’t a government-backed production. In fact, the finished film wasn’t looked on too kindly by the US military in Germany and it was banned in the American zone of Berlin. 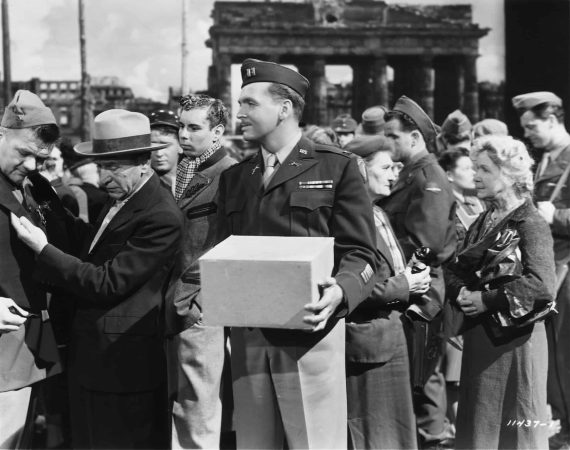 Describing the plot might help explain why the top brass weren’t too keen on it. The film begins with a congressional committee, including congresswoman Frost (Jean Arthur), flying into Berlin to inspect the American presence there and make sure they’re doing a good job of putting the German people back on their feet. Whilst the committee are fed sugar-coated stats and toured around cherry-picked locations, however, Frost sneaks off to make her own investigation.

The uptight conservative congresswoman is shocked to find the American GIs mainly only interested in playing the black market to buy treats to woo German women into bed. When she ends up in an underground nightclub one night, she comes across Erika Von Schluetow (Marlene Dietrich), a seductive singer who, she learns, was connected to top Nazi officials but is being kept from arrest due to the assistance of an American officer. Determined to find out who this is and have him punished, she enlists the help of Captain John Pringle (John Lund), who she believes to be an upstanding Iowan like herself. Unbeknownst to her, however, Pringle is actually the very officer she’s looking for. He’s been seeing Schluetow for a while and using his rank to keep her from trouble.

He plays along with his role of investigator as best he can, but when he gets backed into a corner the only solution he can come up with is to use his manly charms on Frost. She falls for them, which helps dissipate her search for Schluetow’s lover and loosens her up a bit. This works for a while, until numerous factors muddy the waters for the both of them. 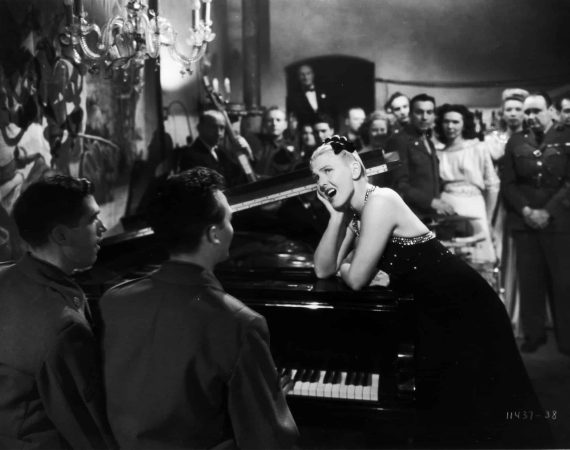 After watching A Foreign Affair for the first time for this review, I was shocked that the film isn’t better remembered. In my opinion, it stands up against some of the best of Wilder’s work. Perhaps not the very highest tier (he did make several masterpieces), but certainly up there.

It has all the ingredients you look for in a Wilder film. His witty dialogue, of course, is present. Quite a lot of sharp lines are drawn from the war, most notably when Colonel Plummer (Millard Mitchell) fires off dozens of irreverent comments about the recent history of Berlin’s landmarks during a tour of the city. Shot largely on location (at least a lot of background plates), the film also provides a shocking authentic view of the recently devastated capital. Aerial shots in the opening scene are particularly powerful. We often think about the victors in wars and forget at what cost these victories came to the opposition.

The honest view of this setting allows the film to insert a great deal of black comedy and political satire, despite exuding a seemingly light tone on the surface for much of the time. There’s a particularly biting bit of satire when a young German boy is brought to Pringle for drawing swastikas everywhere. His dad explains how he plans to brutally punish him, even agreeing to send him to a concentration camp when Johnny jokingly suggests it. It doesn’t sound that funny on paper perhaps, but Wilder turns it into a hilarious aside. It has a great punchline at the end too when the dad turns round to reveal a swastika drawn on his back. 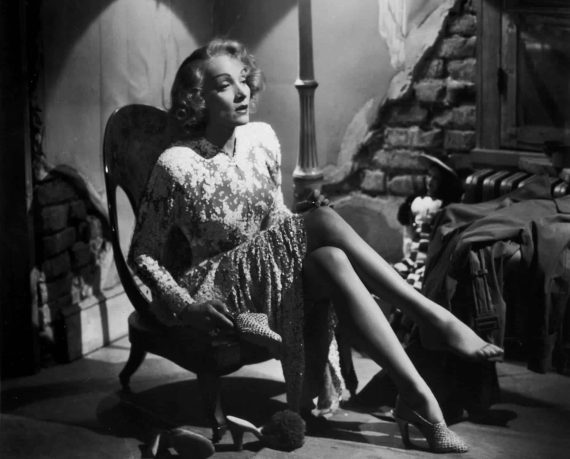 Helping Wilder and Brackett’s script breeze off the paper is a fine cast. Much is made of Dietrich as a great star and indeed she exudes her usual sex appeal and strong-willed, dominating personality. She also got her regular collaborator Friedrich Hollaender on board to write a trio of songs for the film, which she performs in her inimitable sultry style. On top of this, she perfectly delivers a powerful long-take monologue in the latter portion of the film. Dietrich wasn’t keen to take the role on initially, due to her character’s link with the Nazi Party after she herself had done as much as possible to support the Allied troops during the war. Wilder, who was an old friend of hers from before the war, talked her into it though, thankfully.

However, the stand-out in the film for me was Jean Arthur. She was a big star in the 30s and early 40s, but retired in 1944 after reportedly struggling with anxiety as well as getting into a dispute with the head of Columbia. She was coaxed back into only two films after that, A Foreign Affair and Shane, before retiring for good, only taking a few theatre and TV gigs. It’s a shame she didn’t do more in the 40s and 50s, because she was a wonderful actress. She stole the film for me here, turning a character that could have been a basic ‘buttoned-down girl who lets her hair down and wins a man’ into something more subtly layered and a huge amount of fun to watch. Her depth partially comes from the script of course, but Arthur lets it emerge under the surface too. 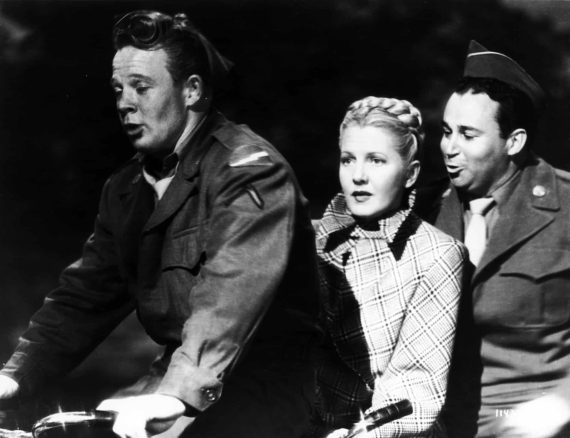 There are moments where the film threatens to feel dated in its attitudes towards women, with Pringle acting rather aggressively towards his two love-interests, but as the film goes on, both get their own back in different ways. I particularly liked the way Pringle’s filing cabinet entrapment of Frost is mirrored in the final scene when she uses chairs in a similar fashion to corner him.

Overall then, it’s another fine entry to Wilder’s stuffed pantheon of classics. I’m surprised it’s not better known. With a sharp script, excellent location work and a winning central performance by Arthur, it’s a real gem.

A Foreign Affair is out on 22nd June on Blu-Ray in the UK, released by Eureka as part of their Masters of Cinema series. The picture quality is rather disappointing, to be honest. It starts off nicely with a fairly clean and clear image, but around halfway through, some persistent lines appear on screen and other signs of damage crop up as it goes on. Perhaps the original negative has been lost, but it’s still a shame when compared to the usual quality of Eureka’s releases. The audio has a few slight noise issues too, though generally it’s decent.

Joseph McBride’s commentary is full of fascinating anecdotes about the production and those involved. He also discusses a number of criticisms aimed at Wilder over the years, so it’s a rich and excellent track all round.

Kat Ellinger’s essay is rather Dietrich-centred, which is a slight shame as, though Dietrich is great in the film and led an interesting life, I felt as though Arthur was the real star of A Foreign Affair and I’d like to know more about her, being the less well-known of the pair. Still, it’s a fine piece, with the first half discussing Berlin before and after the war and how it affected Dietrich.

The booklet consists of a couple of insightful essays on the film, so makes for recommended reading.